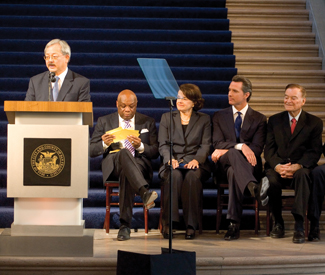 In his inaugural address on Jan. 8, and then again the next day as he appointed progressive Christina Olague to the District 5 seat on the Board of Supervisors, Mayor Ed Lee signaled an intention to bring all sides together to solve vexing city problems, from job creation to the need for more affordable housing.

“At its best, San Francisco is a city for everyone,” Lee said at his inauguration. “We are a city for the 100 percent.”

But that analysis, with his clever riff off of the Occupy movement’s 99 percent paradigm, masks deep political divisions and challenges that will likely play out repeatedly this year, particularly as he partners with a handful of wealthy individuals and corporations — members of the 1 percent, on which he lavished praise during his speech, such as venture capitalist Ron Conway — to craft his economic agenda.

Lee stressed his focus on creating private-sector jobs and his acceptance that “local government will have to do more with less,” while arguing that he can create broad prosperity by embracing high-tech innovations. “We’re poised to invent the future, right here and right now,” he said, shortly before interrupting his speech to post an employment infographic on Twitter.

The next day, after she was sworn in as supervisor representing one of the city’s most progressive districts (replacing Sheriff Ross Mirkarimi), Olague echoed Lee’s focus on job creation and the belief that “it’s time to roll up our sleeves to get things done” in a fashion that transcends ideology.

“I think this is an incredible time for our city and a time when we are coming together and moving past old political pigeonholes,” Olague said, while Lee said, “This is not about counting votes, it’s about what’s best for San Francisco and her district.”

Yet that optimistic spirit alone won’t provide for the renters and low-income homeowners being squeezed out of this gentrifying city, battles that both fought as activists — Olague with the Mission Anti-Displacement Coalition, Lee with the Asian Law Caucus — before joining city government. “We both came from backgrounds fighting for the rights of tenants and immigrants,” Lee said.

At his inauguration, he said he would take on that challenge directly.

“We need to create a permanent stream of revenue to fund housing in San Francisco,” Lee said, announcing the formation of a working group to craft a measure for the November ballot that would create a “permanent housing trust fund” to help finance low- to middle-income homes. “San Francisco must remain a place every one of us can call home.”

Olague listed her top priorities as job creation, affordable housing, helping shepherd redevelopment projects after the state abolished redevelopment agencies, and public safety. And she pledged to be an independent vote: “Every decision will be based on what’s best for my constituents and the people of San Francisco.”

Progressive political leaders were nonetheless thrilled with the choice. While Olague was an early supporter of Lee’s mayoral bid, she has deep roots in the progressive community and was a consistently good vote during her eight years on the Planning Commission.

“I am surprised by the choice, but I think it’s a good one,” Matt Gonzalez, the former D5 supervisor who appointed Olague to the commission, told us. “It’s an appointment that recognizes that D5 is the most progressive district in the city.”

Green Party activist Susan King noted that Olague used to be a Green, as was new Sheriff Ross Mirkarimi and Sup. Jane Kim, before all switched to the Democratic Party in recent years. “It’s the second former Green sworn in over the last 24 hours,” King said. “It’s very exciting.”

“I’m elated. This is the best political news I’ve heard this year. I’ve known Christina for 15 years and I think she’ll be a fantastic supervisor,” Tom Radulovich, director of Livable City, told us. He also praised Lee for the gesture, saying, “He said he wants to work with everyone and this is a signal that he really means it.”

Sup. David Campos said Olague has good values and a wealth of experience in land use issue. “She brings a lot to the table and I can see why he chose her,” he told us.

Even Sup. Scott Wiener, a moderate, praised the Lee’s pick. “I think it’s an excellent choice. She’s thoughtful and independent,” he said. “I don’t always agree with her, but I respect her and I’ve always enjoyed working with her.”

Gonzalez told us he wonders whether the appointment would clear the field of progressive candidates, a long list of whom have expressed interest in running this year. The answer: probably not. Community College Board member John Rizzo contacted the Guardian shortly after the appointment to say, “I’m still in the race and planning to mount a vigorous campaign.”