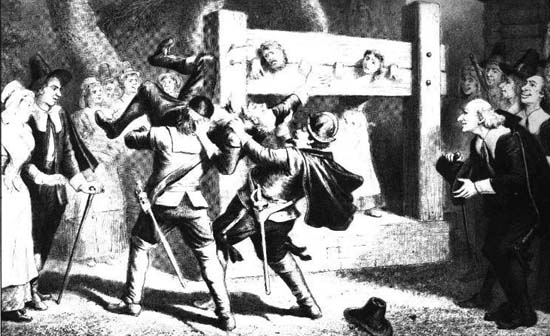 Some days, you wake up, check the news, and wonder just what the hell happened to this country. And I’m not talking about that nutty right-wing view that we’ve strayed from the original vision laid out for us by the authors of the Constitution or the Bible. I have just the opposite view: I’m wondering why those people seem so intent on dragging us back into the bad old days of bygone centuries, when white male property owners ran things as they saw fit.

A dangerously intolerant religious fundamentalist who longs for the Puritan days, Rick Santorum, essentially tied for first place in the Iowa Republican presidential caucuses. And he was part of an entire field of candidates that wants to revoke women’s reproductive and LGBT rights, deny that industrialization has affected the environment and should be addressed, dismantle already decimated government agencies, simply let the strong exploit the weak, and hope that Jesus comes back to save us from ourselves. Their strange reverence for the Constitution apparently stems from wanting to drag us back into the 18th century.

And don’t even get me started on President Barack Obama and his worthless Democratic Party, which is only a bit better than the truly heinous Republicans. At least Obama says some of the right things – like wanting to raise taxes on millionaires, reverse Bush-era attacks on civil liberties, respect states’ medical marijuana laws, and use diplomacy rather than only bellicosity with concerning countries like Iran – even though he acts in contradiction of those statements, over and over again.

It’s no better in the Golden State, where the yestercentury crowd now wants to abandon plans for a high-speed rail system that has already been awarded $3.5 billion in federal transportation funding and for which California voters authorized another $10 billion in bond funding. Why? Because a panel headed by an Orange County douchebag says the business plan isn’t detailed enough and the money for the entire $100 billion buildout isn’t nailed down yet. Well guess what? California also doesn’t have a plan for when its highway and airport systems get overwhelmed by population growth over the next 20 years. And criticizing the viability of high-speed rail – something most other advanced countries figured out how to build decades ago – isn’t exactly going to help secure private equity commitments. It’s a super fast train, folks – not some scary satanic iron horse from the future – people will pay to ride it.

But the situation must be better here in liberal San Francisco, right? Wrong! Mayor Ed Lee, the San Francisco Chronicle, and all their business community allies continue to relentlessly push their belief that the main job of government is to create private sector jobs, even though most economists say a politician’s ability to do so is limited at best.

Lee is pushing for all city legislation to be measured by whether it creates private sector jobs, as if protecting the environment, preserving public sector jobs, or safeguarding the health, welfare, and workers’ rights of citizens weren’t also under the purview of local government. A Chronicle editorial today called Lee the most “realistic city leader in memory. He’s all about creating jobs, repaving streets, sprucing up faded Market Street and fixing Muni’s flaws,” the same goals the paper was focused on a century ago.

But the main trust of the editorial was calling for Lee to also focus on homelessness. Not poverty, mind you, but homelessness. “A decrease in jobless numbers is important, but so are fewer shopping carts pushed along sidewalks and a drop in the numbers of mentally ill in doorways and on park benches,” they wrote. In other words, they just don’t want to see poor people on the streets, because that newspaper and its fiscally conservative editorial writers and base of readers certainly haven’t been calling for a fairer distribution of this city’s wealth, or even higher taxes on the rich that might fund more subsidized housing programs or mental health treatment. I get the feeling they’d be content to just allow shanty towns on our southern border where our low-wage workers can live, just like the Third World cities that they seem to want to emulate.

Ugh, so depressing, so ridiculous, so regressive. I think I’m going back to bed now.