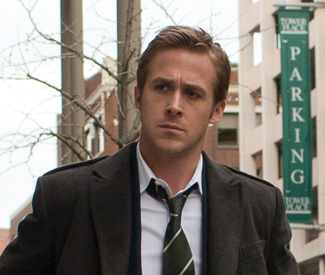 But hasn’t Hollywood always served up heapin’ platters of hunky man meat? Sure, but you’ll probably have to go back as far as Paul Newman and Robert Redford’s ’70s heyday to find the current crop’s particular combo of art and pulchritude. Ushering in this dear ab-by generation was Brad Pitt, the pretty boy unafraid to spoof vain self-absorption, as a brainless gym-bunny in 2008’s Burn After Reading. Around the same time he bounced on a treadmill for the Coens, Pitt began to consistently hook his star to more ambitious projects than your average loutish, laddish Lautner-esque chisel-head, stretching the skill set while doing his part to further the art and working with Alejandro González Iñárritu, David Fincher, and Quentin Tarantino. None of their Pitt-centric projects were the directors’ best, and that goes double for Bennett Miller’s Moneyball and Terrence Malick’s The Tree of Life (Happy Feet Two, you’re two too much).

Nevertheless, Tree of Life, despite its lack of shirtlessness, proved the least commercial and most ambitious widely released feature film of 2011 (in part thanks to co-producer Pitt), and his punishing pater familias was one of the best things about it, grounding Malick’s inner-outer space opera, earth mama twirls, and dinosaur tricks down to earth with his against-type alpha-male hard glances — likely the most demanding performance Pitt has grappled with to date.

Shades darker, with a side of honest abs, Ryan Gosling added oft-wordless fashion-plate soul to ’11: take a page from his Notebook, up-and-coming chestys, because whether you’re crate-digging old footage of the young Mickey Mouse Club kid warbling in floppy PJs alongside Justin Timberlake on YouTube or marveling over his viral snippet of street-fighting men intervention, you know Gosling’s loved. It’s tough to choose between Gosling’s George Clooney impression and cheese-eating Dirty Dancing (1987) tribute in Crazy, Stupid, Love.; his vintage Steve McQueen-James Dean style in Drive (that scorpion jacket launched a jillion Halloween costumes); and his quickly-devolving presidential campaign manager in The Ides of March.

In Ides, Gosling’s silky, feline, almost femme-y smoothness hardens into a chilly “Blue Steel,” threatening to plunge into nuttiness, as the film progresses. As with these other award-snagging hunks, he’s an adult caught in the cogs of a terrible, soul-shattering machine, and as Drive‘s romantic wheelman, Gosling’s ready to run off the median into an off-roading wilderness of ultraviolence. Of course, the deadliest mechanism lies within, for the driver driven to kill, the ladykiller breaking down the angles, and the political player who grabs his revenge after having his ideals destroyed (and bromantic boss-crush on Clooney’s candidate quashed).

The abs — and twinkling, then blistering, peepers — that truly seemed to be everywhere this year belonged to Michael Fassbender, who soft-opened the year in an archetypal romantic part, Mr. Rochester, in Jane Eyre. Fassbender went on to add a dose of real class to X-Men: First Class with his vengeance-seeking metalhead Magneto — oh, Jane, his emotional investment in the comic-book creation was the best thing about the reboot.

The latter part of 2011 ended with a seismic splash of wish fulfillment for Fassbender fans as his Carl Jung deconstructed — and entangled himself in — sex and the psyche in A Dangerous Method, and as Shame‘s corporate hot-shot by day, sex addict by night. His character, Brandon, attempts to lose himself in naked abandon, unable to sustain intimacy with anyone, including his boundary-less sister (see recurring support gal/fan stand-in Carey Mulligan). Shame director Steve McQueen, not be confused with Drive‘s inspiration, wisely lets his camera rest, unsettled and ambivalent, on Fassbender’s face at the end of one night of hopeless coitus, after a close brush with a real relationship gets clipped short by flaccidity.

Caught in mid-rut, Brandon’s orgasm face is an anguished rictus of painful pleasure, half horrifying tragedy mask, half laughable comedy mask. It’s all there, the sexual fantasy-turned-nightmare, the tears behind the dazzling smiles, pecs, and full-frontal shots, conveying in one look the perils of manhood and the forces these foxes can — and can’t — control.