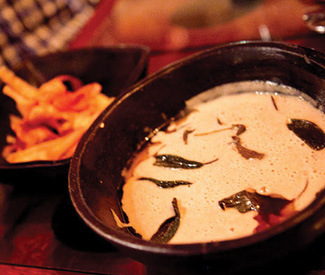 APPETITE As we arrive at the end of 2011, here are a few dishes of soothing comfort for a winter’s night from four under-the-radar places.

Bushi-Tei (1638 Post, SF. 415-440-4959, www.bushi-tei.com) has long been one of my underrated restaurant picks. There’s much to love in the two-tiered space lined in rugged Japanese woods, with 18-foot communal table, and ever-sure conversation starter: Japanese toilets in the bathrooms (air dryers and seat warmers!)

When I heard new chef Michael Hung Jardiniere and pastry chef Yuko Fujii of Fifth Floor were coming aboard, I hoped the refined French Japanese cuisine would remain intact. I was delighted after a couple visits to see Hung has married comfort and intricacy, inventiveness and tradition. Tasting menus are $55, or $8-18 starters, $17-27 main courses.

Tak and Keiko Matsuba thankfully still run the restaurant: they’re among the most adorable husband-wife teams I’ve met. They bring a gentle passion to each aspect of the place, including Tak’s thoughtful wine pairings, like an Alsace Riesling with fish or sake with noodles.

There’s a Sunday brunch offering elegant bowls of egg noodles in Sonoma duck ragout or Haiga rice porridge laced with salt-roasted albacore tuna and a poached farm egg. A small serving of grilled Monterey calamari ($8) in a ginger bourride (a stew made with egg yolk and garlic) impresses with nuanced sauce and juicy squid.

Post-dinner, Tak offers a pour of Denshin “Yuki” Junmai Ginjo sake brewed by Ippongi Kubohonten Co. He spoke of its cowboy boot, kimono-wearing sake maker whose area of Japan, Fukui, was hit hard by the recent earthquake. Matsuba loves to support such producers, welcoming them when they are in the States. We’re lucky to have this haven of pristine East-West cuisine in our city.

Seven Hills (1550 Hyde, SF. 415-775-1550, www.sevenhillssf.com) is one of those neighborhood favorites many outside the ‘hood aren’t aware of. An Italian spot run by French natives(?), it’s a mellow respite for conversation with caring service. I enjoy the pasta most, especially in the form of a signature ravioli uovo ($9.50) filled with ricotta, spinach, and oozing Full Belly Farm egg yolk. In a light pool of brown butter and white truffle oil, it flirts with decadence. Spaghetti ($9.50/$19) is a heartwarming bowl (conveniently in two sizes) dotted with French Grandpa George’s recipe of plump fennel sausage, caramelized onions, and bell peppers in tomato sauce.

Bouche (603 Bush, SF. 415-956-0396 www.bouchesf.com) has only been open a couple weeks and thus is too new to comment in-depth upon. On a recent visit, I suffered tiny pangs of nostalgia, wishing Bar Crudo, since moved to the Panhandle, was still in this tiny, charming space. But the one dish out of a number of Bouche’s small plates ($6-18) that began to assuage those pangs was a creamy chestnut soup ($6). Its aroma evokes a winter panorama, the soup dotted with sage leaves fried in butter (which I could smell downstairs before the dish arrived to my table upstairs), with a side of crispy root vegetable chips to place on top.

Call it healthy “fast food” for the Peninsula set: LYFE Kitchen (167 Hamilton Ave., Palo Alto. 650-325-5933, www.lyfekitchen.com) is a bustling, new eatery in downtown Palo Alto. Draft beers, wines, smoothies, and juices flow, while vegan, vegetarian, and organic foods encourage guilt-free eating. This sort of place would take off in downtown SF: its healthful approach doesn’t leave taste behind, while its connection to celebrity chef Art Smith is a point of interest for foodies.

Alhough not everything worked (I’m afraid fries are ultimately better — and less soggy — when actually fried), two stand-outs are Art’s unfried chicken ($11.99) and a roasted beets and farro salad ($7.79). Chicken is a dish I often brush past for more enticing options, but this tender, “unfried” chicken is pounded flat, textural with breaded crust, on a heartwarming bed of roasted squash, brussels sprouts, dried cranberries, tied together by a drizzle of cashew cream and Dijon vinaigrette. The salad is loaded with roasted red beets over whole-grain farro and field greens, with a melange of fennel, walnuts, dried cranberries, oranges, red onion, and basil in maple-sherry vinaigrette. Every bite packs a flavor punch. Here one can fill up with a clear conscience. *