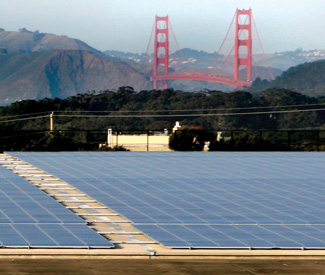 A contract agreement for San Francisco’s innovative clean energy program, CleanPowerSF, could be approved by the San Francisco Board of Supervisors as soon as January, representing a major milestone for efforts to put the city in the retail electricity business.

CleanPowerSF, which stands out as one of California’s most ambitious community choice aggregation (CCA) municipal energy programs, would offer San Francisco customers the option of powering their homes with 100 percent renewable energy instead of the standard mix of predominantly gas and nuclear-generated power supplied by PG&E.

According to a draft contract introduced at the board, energy would be purchased on the open market by Shell Energy North America and delivered to residential customers, who would pay a modest premium for the service. The first phase would target a narrow customer base, with plans for expansion.

In the long run, the San Francisco Public Utilities Commission (SFPUC) has committed to constructing city-owned wind farms, solar arrays, and combined-heat-and-power systems to generate green power locally, which would ultimately lock in lower electricity rates — but this remains in an early assessment phase. Energy consultant Paul Fenn of Local Power Inc. is conducting the study.

HURRY UP AND WAIT?

The fact that a draft contract agreement is under consideration signifies a breakthrough for a program that for years crept along at a snail’s pace, as tension simmered between SFPUC officials and members of the Local Agency Formation Commission (LAFCo), the body overseeing CleanPowerSF implementation.

“We have been waiting for this for so many years,” remarked Sup. David Campos, who chairs LAFCo. “We pushed the [SFPUC] really hard.”

Yet longtime advocates of San Francisco’s CCA, like Eric Brooks and other environmentalists affiliated with the Local Clean Energy Alliance, worry that CleanPowerSF will never hit its stride because it won’t be accessible to customers who want to go green but can’t afford the higher price tag. In an ironic twist, he and others who previously excoriated the SFPUC for its sluggish progress are now urging the lead agency to pause instead of steamrolling ahead.

“We did not want things to go the way they did,” Brooks said. “We’re saying, you should not finalize the contract with Shell until we have the build-out information. It enables us to get better rates,” he added. With detailed, shovel-ready plans in place, Brooks said, arrangements with Shell could hinge on plans for city-owned generation.

Early plans for city-generated power call for enough projects and retrofits to account for 360 megawatts of efficient and renewable energy capacity, including 31 MW of solar panels and 150 MW from a wind farm, plus a combination of weatherization and other efficiency measures. The Local Clean Energy Alliance estimates that more than 1,000 jobs associated with these projects could be created within the first three years.

SFPUC officials and Campos remain unconvinced that it’s a good idea to hold off on finalizing the Shell contract.

“We’re all kind of moving toward the same goal,” SFPUC spokesperson Charles Sheehan said. “If we wait a year or two years, you don’t know what’s going to happen in the future. We have to seize the moment.”

Campos and Sheehan both said advocates’ concerns would be addressed by a contract provision allowing the city to swap green power purchased by Shell with green power produced locally, once the electricity becomes available. The SFPUC also agreed to a provision committing to the build-out program, on a separate track from the Shell contract.

“We’re not going to be able to [start building] unless we have the customer base to begin with,” Campos pointed out. “I have a different perspective in terms of why it’s important to move forward,” he acknowledged, but said he was looking forward to a “healthy debate” at the board.

For all its complications, CleanPowerSF is a quintessential example of that progressive adage “think globally, act locally.” In early November, the International Energy Agency issued a warning calling for dramatic changes in power generation. With so many coal-fired power plants under construction worldwide, the agency noted, the opportunity to avert the worst impacts of global climate change will have passed completely by 2017.

ULTRA GREEN, FOR A FEE

San Franciscans will be able to reduce personal energy usage and perhaps shed some consumer guilt by participating in the CCA program. Under the plan, Shell will purchase electricity from carbon-free sources and sell it to the SFPUC for distribution to CleanPowerSF customers. The shift will green the power mix on the grid while sending market signals that the demand for renewable power is on the rise.

At the start of the program, which the SFPUC pegs as July or August of 2012, up to 270,000 residential customers will be automatically enrolled. Targeted customers will also receive notices asking them to choose whether to stay with the program, or opt out and continue receiving power from PG&E.

Exact rates won’t be hammered down until February or March of 2012, but preliminary estimates suggest most customers will pay roughly $7 a month more for the green power, though a few (those who use a lot of electricity) could wind up paying as much as $50 more.

The price tag could prove to be a tough sell, even in affluent San Francisco. “We’ve done extensive market research,” explained Sheehan. “And we have taken into account PG&E’s opposition campaign,” an all-but-guaranteed response to the program which the utility giant unleashed in full force when neighboring Marin County undertook its own CCA.

Based on the research, “We are forecasting a two-thirds opt-out rate,” Sheehan explained. Initially, this means only around 10 percent of San Francisco residents — a population likely limited to those in higher income brackets — are expected to enroll. From there, new rounds of enrollment and opt-out noticing would follow.

The draft contract includes a $19.5 million appropriation, which includes operating reserves plus a $15 million escrow account. That’s the maximum payout Shell could receive if the city terminated the contract before the agreed-upon date and left the company stuck with unused power.

“It’s one way of showing we have some skin in the game,” Sheehan explained. Shell would only be eligible for $15 million at the start of the 4.5 year contract, he added, and even then it would only take effect if Shell was forced to sell the excess power at a lower price than it paid.

The Shell contract cannot go into effect until several steps have been accomplished. First, the board must give its stamp of approval for the contract and the $19.5 million appropriation. The SFPUC must then finalize program rates.

The SFPUC is also awaiting a ruling from the California Public Utilities Commission (CPUC) determining a bond amount required for all CCA programs. The bond is “kind of a mechanism to make PG&E whole, if in the very unlikely circumstance, this program would cease,” and PG&E had to absorb all CCA customers immediately, Sheehan explained. He said a ruling is expected in February.

The plan to offer ultra green power at a higher price is a departure from the original program goals, which were to offer greener-than-average power at or below PG&E electricity rates. That concept was jettisoned after SFPUC staff determined the objective wouldn’t pencil out in the short term.

Whether or not the supervisors will sign off on the contract as it stands remains to be seen, though Sheehan was optimistic. Campos said it would be important to educate members of the board of supervisors and the public about the program. “It’s going to be investment that’s going to pay for itself,” he said, “many years down the road.”