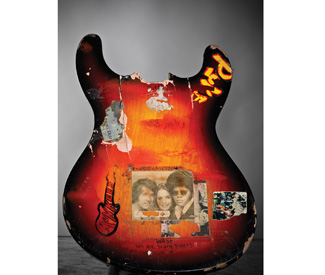 YEAR IN MUSIC While thousands of shoppers — many appearing unfocused in their consumerist abandon — swarmed around me in the midst of Black Friday madness a couple of weeks ago, I knew exactly what I was looking for. Indeed, it was the only thing on my shopping list — the only thing that could make me get out of bed early the morning after Thanksgiving.

The re-release of these seminal singles — “Smells Like Teen Spirit,” “Come As You Are,” “Lithium” and “In Bloom”— probably only appeals to die-hard Nirvana fans or the completests; though possibly also to all those who were around when Nevermind first started making waves, and can vividly remember the impact of each single (and its accompanying music video) as they were released in the fall of 1991 and throughout 1992.

I fall into all of these categories, so it was with reverence and much anticipation that I braved the crowds of Union Square, walked briskly into Rasputin Music, found a set, and grabbed it off the shelf. There were no new tracks to discover, nothing that I hadn’t heard before — but the sense of excitement and joy from racing down to the record store was a welcome feeling, transporting me back to junior high, when Nirvana was exploding, and I was first exposed to a new world of music that would forever changed my life.

It was with these same highly-charged emotions (albeit months earlier) that I made the pilgrimage to Seattle in September to visit a new exhibit celebrating Nirvana’s legacy and impact on popular culture at the Experience Music Project museum. “Nirvana: Taking Punk To The Masses,” opened in April and features a treasure trove of artifacts and interactive installations telling the story behind Nirvana — how it became one of the most influential and beloved rock bands of the last quarter century.

Seeing the instruments that were used to create the music that has had such a profound effect on my life was awe-inspiring; as was gazing at hand-written lyric sheets, original demo tapes, artwork, family photos, stage props and more. Oral histories from band members Krist Novoselic and Chad Channing, along with others who had worked alongside them including producers Jack Endino and Butch Vig, and guitar tech Earnie Bailey, provided a personal look at the life of the band.

When coming to the end of the exhibit, my friend and I both commented that while it was a touching experience, it somehow seemed too brief, that there really should have been more to it. It was then that we looked at each other and came to what should have been an obvious realization; for all its influence and impact on our lives and the lives of millions of fans around the world, Nirvana only existed for a mere seven years. The band’s career, like Kurt Cobain’s life, was cut much too short.

In that time, however, the band made an incredible impression on its fans — and at the end of the exhibit there’s a video station where visitors are invited to share and record their memories of Nirvana — what the music has meant to them personally. After walking past the final panels and displays that recounted the events of April 8, 1994, though, I (and several other people nearby) was a little misty-eyed, and didn’t feel much like trying to sum up what Nirvana has meant to me all these years, on the spot, in front of a camera.

Instead, my friend and I proceeded to do what Nirvana had inspired us to do as teenagers; we went into one of the jam rooms in the museum, picked up a guitar, cranked up the volume, and played some tunes off Nevermind.