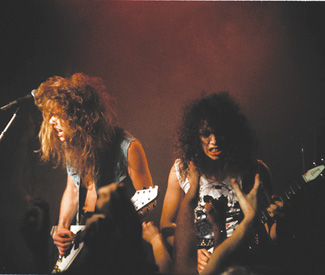 Year in Music “This is not a definitive history book,” Murder in the Front Row author-photographer Brian Lew is careful to point out. “We wanted it to be more like a time machine.”

Lew and his co-author, photographer Harald Oimoen, are not household names. Their photographs, on the other hand, are world famous. That’s Oimoen’s shot of Slayer, wreathed in smoke, on the back of Hell Awaits. Cliff Burton bending a string to the breaking point on the back of Metallica’s Ride the Lightning? Oimoen again.

When Burton — a Castro Valley native who died in a tragic 1986 bus accident — first rehearsed with Metallica in 1982, Lew was there, sitting on a couch behind the drumset, snapping away. Published by Bazillion Points, the Brooklyn-based brainchild of metal historian Ian Christe, Murder in the Front Row is a collection of stunning, intimate photographs from the infancy of thrash metal.

Despite being fresh-faced suburban teenagers, Oimoen and Lew attended nearly every historic, chaotic show between 1982 and 1986 — camera in one hand, beer in the other. They banged their heads. They demanded extreme tempos. They waved paper towels at Slayer, successfully goading the glowering Angelenos into abandoning eyeliner forever.

“It was fun! We were all kids!” recalls Lew, laughing, in a San Francisco coffee shop. “When you look at metal kids now, take their pictures, everybody’s fronting…they’re trying to look tough.” Oimoen has his own explanation for all the toothy candids: “I’d want to remember the drunken times.” Eerily, a lot of the more obvious mugging looks like they belong on some hard-rocking early-’80s version of Facebook.

The musicians depicted in the book were able to take advantage of the Bay Area’s long history of musical open-mindedness. They combined the virtuosity and power of metal with the aggression of punk, putting a special emphasis on sheer velocity, and found an audience desperate for something new. “Everyone was there because the bands played fast,” Lew explains.

Metal worship had its temples (see map). Stores like the Record Vault were run by older fanatics with access to the latest, heaviest European imports; they purchased Oimoen’s photos on consignment to fuel his ravenous record shopping. Trips to the Record Vault became a pre-show ritual, deepening community bonds that were consecrated in blood and booze at hallowed venues like Ruthie’s Inn.

Fueled by the music, boundaries between retailer and customer, or between band member and fan, began to break down: “There was no distinction at all, especially at first,” Oimoen remembers wistfully.

Metal also had its heretics. Gary Holt and Paul Baloff of Exodus, the East Bay’s pre-eminent thrash band, were notorious for blithely ripping Ratt and Mötley Crüe shirts off anyone unlucky enough to be caught wearing one. “[they] would cut strips from the shirts and wear them around their wrists as badges of honor,” Lew ruefully recalls. His photos provide incontrovertible evidence.

Thirty years later, the two photographers put the finishing touches on a “a yearbook of our youth,” as Lew describes it. A lot can change in three decades, though heavy metal Lou Reed collaborations have probably always been a bad idea. “The people I went to high school with, when I played them Kill ‘Em All — they hated it. And those same people like Metallica now, you know?” Oimoen scoffs.

Last week, the multi-platinum metal band played four sold-out shows at the Fillmore. Somewhere else in the world, an unknown photographer shot an unknown band, toiling in obscurity, but destined for greatness. Lew’s advice to that anonymous shutterbug? “Don’t throw anything away.”

2. The Gates of Slumber, The Wretch (I Hate Records)

9. Orchid, Capricorn (The Church Within)