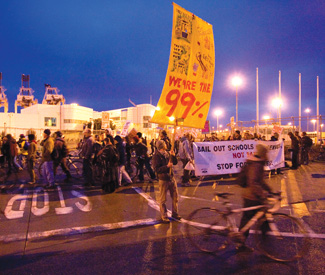 When significant events related to the Occupy movement occur in the pre-dawn hours, it usually means a protest encampment has been raided. But on Dec. 12, Occupy protesters were the ones carrying out a strategic plan before sun up.

Activists organized by OccupyOakland effectively blocked cargo shipments from moving through several Port of Oakland terminals that day, as part of a coordinated West Coast Port Blockade that featured similar actions in other cities including San Diego, Portland, Seattle, and Longview, Washington.

About 150 longshore workers were sent home from their morning shifts at Oakland shipping terminals because protesters were marching in circular picket lines outside the gates.

The day began when more than 1,000 protesters met up at the West Oakland BART station at 5:30 a.m., sleepily raising signs and banners in the chilly morning air as they proceeded down 7th Street toward the port. Once they reached the sprawling shipping hub, they formed picket lines outside terminal entrances. Police were on the scene and clad in riot gear, but no clashes with protesters occurred early in the day.

Around 7 a.m., when the morning shift would have typically started, two International Longshore & Warehouse Union (ILWU) dockworkers — who declined to give their names — stood near the Hanjin Shipping gate at berths 55 and 56. Past the gate, a cargo vessel which had likely come from Japan was berthed and waiting to unload.

The men calmly surveyed the roughly 200 chanting Occupy activists as they marched around and around in a circular picket. “Ain’t nobody going to cross it,” one offered. The other gestured toward the protesters. “These are Americans wanting American jobs,” he said.

Around 10 a.m. outside the same terminal, protest organizer and Oakland hip-hop artist Boots Riley declared the first part of the port shutdown to be a victory. “Longshoremen are going home now,” he said. “Effectively, the Port of Oakland is shut down.” Later in the afternoon, protesters returned to prevent the start of an evening shift.

Until recently, the nationwide Occupy movement manifested as tent cities springing up everywhere in rebellion against the lopsided economic conditions. After a series of police raids cleared the tents away, however, organizers in the Bay Area and beyond took a different tack with the port blockade.

Working in tandem with allies from labor, occupiers from San Diego all the way up to Anchorage directed their gaze at international shipping hubs, critical infrastructure for multinational businesses importing and exporting goods between Asia and North America.

Cargo terminals make for heavyweight targets, as five of the nation’s 10 largest ports are located along the West Coast. The value of annually traded goods flowing in and out of Oakland alone is $34 billion, and authorities there estimate some $8 million could be lost if business were to be halted for a full day.

“The ports play a pivotal role in the flow and growth of capital for the 1 percent in this country and internationally,” occupiers explained on a website announcing the port shutdown. “For that reason alone it is the ideal place to disrupt their profit machine.”

The ports weren’t selected as a target for that reason alone, but rather as an affront to specific corporations whose labor practices have sparked the ire of port workers. Export Grain Terminal (EGT) and its parent company, Bunge, Ltd., came into Occupy’s crosshairs because of their ongoing dispute with ILWU Local 21 in Longview, Wash., stemming from what longshoremen characterize as union-busting practices.

The third objective of the blockade, according to organizers, was to strike back against a series of police raids that dismantled Occupy encampments nationwide.

It wasn’t the first time cargo ships traversing the Pacific would be stalled by a politically motivated coast-wide port blockade. In 2008, ILWU members coordinated a West Coast port shutdown in dissent of the Iraq War.

In 1984, longshoremen and anti-apartheid activists blocked South African cargo to boycott the apartheid regime, noted ILWU member Stan Woods. Similar shutdowns, carried out in response to politically explosive issues going back to 1934, have been led by community activists forming picket lines at port entrances to prevent dockworkers from beginning their shifts.

Occupy’s call for a coordinated blockade brought an unprecedented twist to this historic trend, representing the first time a group unaffiliated with dockworkers had called for a shutdown spanning the entire West Coast. It left some seasoned organizers wondering anxiously how things would unfold, while others saw it as a gust of wind in the sails of the labor movement.

“One of the good things about the Occupy movement is that it’s challenging leaders of progressive institutions,” Woods said. “The old way … isn’t working. There’s been a one-sided class war, and there has to be a two-sided class war.”

Organizer Barucha Peller noted that the Occupy movement could be galvanizing for non-unionized workers, too. “Our movement is giving a framework for the 89 percent of workers who are not in unions,” she said.

For occupiers up and down the West Coast, the port shutdown also seemed to present a kind of test as to whether their young movement could successfully “exert its collective muscle,” as an OccupyOakland press statement put it, and effectuate a mass mobilization even after police raids flattened their encampments.

In the weeks leading up to Dec. 12, even as Bay Area Occupy organizers plastered fliers about the blockade everywhere, met with union members, and organized outreach events to garner community support, they stumbled into challenges. Robert McEllrath, the president of the ILWU, publicly criticized the blockade plan, saying organizers had failed to reach out to union officials before unanimously approving the call to action.

“Any decisions made by groups outside of the union’s democratic process do not hold water, regardless of the intent,” McEllrath wrote. He seemed troubled that Occupy had attached itself to a union struggle without adequate communication, but an official endorsement of a third-party blockade by the ILWU would have landed the union in legal trouble.

“Whenever a group of people decide to march into a workplace in an effort to shut it without respecting the democratic decision-making process, it’s not an ideal situation,” ILWU spokesperson Craig Merrilees told the Guardian.

Some rank-and-file ILWU members saw things differently. “The rank and file do support the principles of the community, and Occupy,” said Anthony Lavierge, an ILWU steward. “Longshoremen had a good response to [the Nov. 2 port blockade]. It was empowering to a lot of people that so many came out.”

Another rank-and-file union member said, “the majority of ILWU workers are supportive of what’s going on, definitely.”

One rank-and-file ILWU member and self-described anarchist published a critique online raising concerns that OccupyOakland had failed to bring local union officials on board before approving the call to action.

In response, OccupyOakland organizer Mike King said, “We never brought it to them, because it’s not something they could endorse.” Yet he added that they had sought to include the rank-and-file from the start.

“We have done far more outreach for Dec. 12,” than in the days prior to the Nov. 2 port shutdown, which brought tens of thousands of activists to the street, King said. “Leading up to Nov. 2, we never expected half that many people would show up.”

Occupiers in San Diego, Los Angeles, Portland, Vancouver, Anchorage, and other cities all signed up to participate, and the idea drew support from activist groups as far away as Japan who vowed to perform solidarity actions in their own communities.

Nevertheless, the international union president’s statement prompted a flurry of mainstream news articles — along with some downright derisive columns — casting occupiers as out of sync with the very workers they claimed to stand with.

In Oakland, authorities of the targeted facility posed another obstacle. The Port of Oakland took out full-page ads in local daily newspapers and the New York Times urging the community to “Keep the Port Open.” The ads borrowed the language of the movement by proclaiming that the port “employs the 99 percent.” Port spokesperson Robert Bernardo emphasized this message in an interview with the Guardian. “When you shut down a port, you lose jobs,” he said. “Local jobs.”

Sue Piper, special assistant to Oakland Mayor Jean Quan, noted prior to Dec. 12 that the mayor was working with police and port officials to ensure that the port remained open for business. On the morning of the port blockade, however, police stood down and did not prevent protesters from circling up in front of terminal entrances.

Lost in much of the mainstream coverage of the port blockade were Occupy Oakland’s three main objectives. The protesters aimed to demonstrate solidarity with low-income port truckers laboring in service of the powerful SSA Marine; stand with ILWU Local 21 members in their face-off against EGT; and deliver a show of resistance against coordinated police raids of Occupy encampments nationwide.

In October, 26 Los Angeles truckers working for a port company called Toll Group were fired after wearing Teamsters truckers’ union jerseys to their shifts to demonstrate their wish to unionize. Because they’re classified as independent contractors instead of employees, it’s illegal for the truckers to join unions. They’re paid per shipment rather than per hour, which translates to hours of unpaid labor spent in the queue, and must cover their own job-related costs.

Occupy Los Angeles caught wind of the incident and began to talk about doing an action in solidarity with the truckers.

“The date of Dec. 12 was originally suggested by people in Los Angeles,” explained Dave Welsh, a delegate of the San Francisco Labor Council and secretary of the Committee to Defend the ILWU. “It’s also Our Lady of Guadalupe feast day, a Mexican holiday. Since many truckers of the Port of LA are Mexican, they picked that date. One focus [of the blockade] is support for truckers and their demand for better wages, working conditions, etc.”

On the day of the blockade, an open letter from port truckers was published on the website of the Coalition for Clean and Safe Ports, an advocacy group. “We are inspired that a non-violent democratic movement that insists on basic economic fairness is capturing the hearts and minds of so many working people,” the message read. “Thank you ’99 Percenters’ for hearing our call for justice. We are humbled and overwhelmed by recent attention. Normally we are invisible.”

The second major target of the blockade was EGT, which constructed a new grain terminal on Port of Longview property at the edge of the Columbia River in southern Washington, about an hour’s drive from Portland, Ore.

EGT’s parent company is Bunge, Ltd., a major agribusiness firm that has come under fire for everything from tax evasion, to rampant clearing of Amazon rainforest lands for soybean cultivation, to the use of slave labor in Brazil.

Although the terminal construction first brought hope to a small community inflicted with 15 percent unemployment , ILWU Local 21 President Dan Coffman says things soured when EGT brought in out-of-state laborers to build the facility, then refused to hire members of his union.

Coffman contends that EGT’s lease with the port means the company is required to hire Local 21 workers, but EGT disputes this, and has been locked in a federal court battle with the port. The dispute has prompted union members to stage port blockades of their own, resulting in some arrests.

Peller, the Occupy Oakland organizer, announced on a megaphone Dec. 12 that occupiers in southern Washington had shut down the Port of Longview, according to a text message from ILWU Local 21. Union members wanted to thank the movement for the show of support, she added.

“They thought they could just run over a small local,” Coffman told the Guardian, referencing EGT. “Well, David met Goliath. We’re going to fight them till the bitter end.”