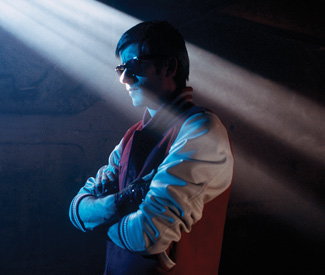 Are friends electric? In 2011, synthpop sounded like a safe vehicle with which to whirl forward, one wheel in the quickly receding past and the other in the fast-coming future.

As the light turned green on ’11 and roared on through 11/11/11, those binary 1’s pointed to the synthetic pleasures harking back to Human League, Yazoo, and Depeche Mode. Early in the year, La Roux’s Elly Jackson took home a Grammy for her eponymous debut — signifying the U.S. music mainstream’s approval.

You could detect the synths popping beneath the beckoning, bright textures of Vetiver’s "Can’t You Tell," the Paisley Park-meets-"Enola Gay" washes of Nite Jewel’s "One Second of Love," and the Doppler effect textures of Toro y Moi’s "Talamak," while the much lamented departure of James Murphy’s LCD Soundsystem from the intersection of synth beats and rock squall threw up yet another sign that synthpop was on the move. Tellingly, Holy Ghost!, on Murphy’s DFA imprint, cast its eyes back longingly to the chilly dreamtime of the Ministry’s "I Wanted to Tell Her," lodging it in a busy thicket of bumping, rumbling bass and keys.

Don’t fear the ’80s: Yesteryear synth populists the Cars released its first LP with Ric Ocasek since its ’88 split, and the year closed with Gary Numan getting the avant seal of approval as an honored guest at the recent Battles-curated ATP show. Adding fuel to the firing pistons, locally, was a look back at the real Bay underground article: this year’s comp BART: Bay Area Retrograde (Dark Entries) wiped the "Clean Me" messages written in dust from tracks like Voice Farm’s "Voyager." The latter almost seemed to lend its synth tone directly to the sinewy, eerily sensual "Nightcall" by Kavinsky and Lovefoxxx off the Drive soundtrack (Lakeshore).

Much like that violently dreamy film’s Danish-American hybrid, "Nightcall" and College’s "A Real Hero" teetered between the almost OTT strain of romanticism and superchilled detachment embodied by the best of synthpop— the simple hooks and breathy, girlish vocals perfectly complementing the propulsive, forward-thrust mechanism of the tracks. You can’t drive those songs from your head.

In one of the strongest contenders for (double) album of the year, M83’s Hurry Up, We’re Dreaming (Mute), synthpop was only one component of the deep, ambitious, magnificent sprawl, a recording much like French transplant Anthony Gonzalez’s adopted L.A. home. Its breakout single, "Midnight City," tapped both the brooding nihilism of Grand Theft Auto and the noirish retro-epics of Michael Mann in collaboration with Giorgio Moroder, as leader Anthony Gonzalez emotes wistfully, "Waiting in a car /Waiting for a ride in the dark / Drinking in the lounge / Following the neon signs / Waiting for a roar / Looking at the mutating skyline / The city is my church / It wraps me in the sparking twilight."

Cue the orchestral, rollercoaster synths, faux bird calls, and reclaimed-from-the-cheese-bin skywalking sax. It may say as little as Numan’s "Cars"—making it the perfect tabula-rasa fodder for both Victoria’s Secret commercials and capitalism-happy How to Make It in America —but like a European native finding inspiration in the simultaneously alienating and freeing highways of El-Lay or J.G. Ballard, both songs prove that you needn’t rely on language to move a listener.