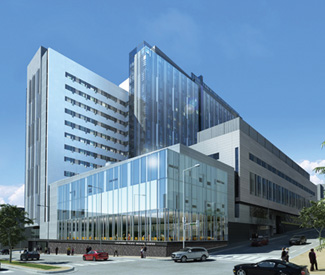 Activists and city officials are challenging California Pacific Medical Center — which a new study shows provides far less charity care than other San Francisco hospitals — to do more for all city residents if it wants approval for the massive new high-end hospital and housing project it is seeking to build on Cathedral Hill.

That $2.2 billion project, which the city will consider sometime next year, would also rebuild or modify four other CPMC hospitals in town, including St. Luke’s Hospital, which serves low-income Mission District residents, but which will see its number of beds cuts from 130 now down to 80.

Community groups opposed to the CPMC project as it now stands — including the Good Neighborhood Coalition, Jobs with Justice, and Coalition for Health Planning-San Francisco — commissioned the UC Hastings College of Law to study how CPMC’s charity care compares with other nonprofit hospitals in the city.

The result, “Profits & Patients: the Financial Strength and Charitable Contributions of San Francisco Hospitals,” was released Dec. 8 and was scheduled to be the subject of a public hearing at the Board of Supervisors on Dec. 13 after Guardian press time. Activists planned to use the hearing to highlight some of the report’s most damning conclusions about CPMC and its nonprofit parent company, Sacramento-based Sutter Health.

“Mainly due to Sutter Health’s plan to alter its current hospital structure within San Francisco, the provision of community health benefits by San Francisco hospitals is now a major issue before the Planning Commission and Board of Supervisors,” the report reads.

The report compares CPMC’s hospitals with St. Francis Memorial Hospital, St. Mary’s Medical Center (both are Catholic Healthcare West facilities), and Chinese Hospital, as well as noting how the city-run General Hospital provides by far the most charity care in town. The report finds CPMC is only spending about 1 percent of its revenues on charity care while the city sets a minimum standard of 3 percent.

Even before that project, CPMC/Sutter is the dominant health provider in town, and by far the most profitable. Between 2006-2010, the report says the company made $743.9 million in profits from its San Francisco operations, compared to St. Mary’s $22.6 million in profits and the $14.8 million loss by St. Francis.

“Our analysis shows that CPMC has the financial capacity to provide more of a share of services for uninsured and underinsured San Franciscans than it presently does, and that it is crucial for CPMC to do so in order to meet the city’s health care needs,” said Jeff Ugai, a Hastings student who worked on the study.

In 2010 CPMC’s three oldest campuses — Pacific, Davies, and California — provided charity care at a patients per bed rate less than half that of St. Francis, even though CPMC is triple St. Francis’s size and has much greater financial stability.

“St. Francis meets a huge amount of charity care patients. CPMC clearly can and should meet healthcare needs,” said Emily Lee, a member of the Chinese Progressive Association who spoke at a press conference announcing the report. “From the position of the coalitions, we want to see a project, and we want to see a good project.”

But CPMC, which has been resisting calls by Mayor Ed Lee and other city officials to commit to more charity care as a condition for its project, isn’t even accepting the report’s damning conclusions that it is extracting huge profits from San Francisco and giving little back.

“It depends on how you calculate it,” said CPMC spokesperson Kevin McCormack. “As a dollar amount, we give more in charity care than any other hospital except for General Hospital.”

That’s not surprising given that CPMC makes more money in San Francisco than any other hospital, enough that it has become a cash cow for the entire chain.

But McCormack says Sutter reinvests its profits back into the system.

“It goes back into the system itself,” he said. “It goes back into the hospital, into salaries, building new facilities, repairing old ones.” Yet the activists are unconvinced. Even before this report on charity care, they were critical of a CPMC project that includes housing on Van Ness with low rates of affordability, and which they say doesn’t rebuild St. Luke’s large enough to meet the community’s needs. It is also agreeing to operate St. Luke’s for only 20 years. “I like to call it a stay of execution,” said Jane Sandoval, who’s been a nurse at St. Luke’s for 26 years. “When CPMC took over with their master plan, it was an enigma to me how they concluded what the community needed. I know what the community needs, and I wonder who they asked.”