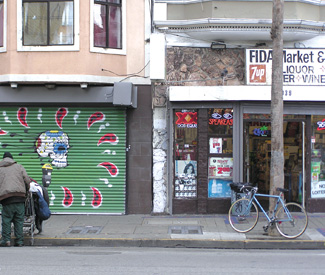 So why are Medithrive customers and staff members peeved? Because the new feature isn’t an expansion in services — it’s a forced shift in the co-op’s business structure. The dispensary was compelled to close its doors on 1933 Mission Street after a Sept. 28 letter from Department of Justice attorney Melinda Haag threatened its landlord with jail time if Medithrive didn’t cease operations in the space within 45 days. (Full disclosure: Medithrive is a Guardian advertiser)

The feds’ given reason was Medithrive’s proximity to Marshall Elementary School, located a 745-foot walk (according to Google Maps) from the dispensary door.

But Marshall’s principal Peter Avila wasn’t consulted on the matter. When called for comment by the Guardian, he said that he had bigger safety concerns.

“Right next door to Medithrive is a liquor store,” Avila said, adding that there is also a methadone clinic across the street from his school. “We have to deal with people passed out on the property, people smoking — those are more the issues than people buying medical marijuana.”

The principal says he patrols Marshall’s immediate neighborhood three to four times a day, dealing with drug addicts, people with mental problems, and the Mission’s homeless population. He called the dispensary “discreet” and never saw any cannabis usage by dispensary patients. Indeed: “They looked pretty much like the people who were coming out of the Walgreens [down the street].” In the past, Medithrive has offered to sponsor health education at Marshall.

Regardless, the dispensary’s Mission Streets doors are shuttered now. On many days, a staff member stands outside, handing out flyers announcing the delivery service to customers unaware that walk-up sales have ceased.

Holliman says the shift to delivery services has been unexpectedly popular with Medithrive’s customers and allows the dispensary to service patients unable to physically access the storefront location — but it’s not without its challenges. Operations have been transient since the co-op is unable to even stage deliveries from the space on Mission Street. The day that the Guardian called, a voicemail informed patients that due to high call volume they’d have to leave a message so that dispensary staff could call them back. Once contacted by a helpful “budtender,” it took a little over an hour for the order to arrive.

Although Medithrive let go of many employees in its initial closure, it’s hired nearly all back in the transition to the labor-intensive delivery services. The dispensary is still hoping to secure another brick and mortar location, but permitting for new dispensaries has stalled at the city level.

Even if the dispensary’s been booted from its space, at least Medithrive patients still have access to medical cannabis — for now. Holliman is convinced that Bay Area dispensaries haven’t seen the end of legal challenges. “I’m sure there’s more to come,” he said grimly. “The feds are really serious about this.”