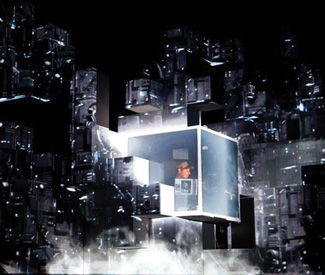 SUPER EGO Is it really such a bad thing that mainstream pop is riding the underground’s ass so hard, assimilating alternative nightlife trends almost before they cycle off our freakish dance floors? I’d almost grown addicted to apoplectic pearl-clutching. Britney made a dubstep song! Kanye’s using 808s! The Black-Eyed Peas are referencing JJ Fad! Skrillex in general!

Beep me when Moodymann re-edits Sugarland? Now it’s so easy to niche myself out of the pop world — dissolving into Soundcloud, consulting my Resident Advisor, Junoing my Beatport, popping my Little White Earbuds, and simply refusing to shop at Costco or workout at Gold’s — that it’s possible to screw all that noise. When I did encounter radio hits, I loved the blowout sugar rush, even if I found myself getting slightly angry that the one alternaqueer club in Barcelona pumps Rihanna nonironically. Oh, well. It could have been David Guetta. (It really could have been: I have no idea what he sings.)

Also making it easy: this year I got to chase my nightlife passion around the world. I whirled in my seat at a moonlit Sufi music festival in Fez, rocked to live revolutionary hip-hop in Tunis (despite a government curfew that shut down the city at 9 p.m.), laughed at the drunken hazing of graduates at one of the oldest universities in the world in Padua, discovered true underground flamenco in Seville, and danced for about 36 hours straight in Berlin. In recent months Hunky Beau and I have encountered Tuareg rock bands in Ourzazate, line-dancing gay vaqueros in Mexico City, and 6 a.m. beerhalls in Brussels. Have you seen the drag queens in Zihuatanejo? We have seen them and lived. Nightlife is a universal language: it will survive LMFAO.

This nightlife year-in-review isn’t my annual list of my favorite parties and promoters in the Bay — that comes out in January, so all you queens who just want to see your name in print will have to hold your cluck-clucks. I will say that a lot of my petty gripes remain the same: there’s not enough bass in most of the clubs (embarrassing for those with nights dedicated to bass music), some ladies need to stop clawing me in the back as they push their way through the dance floor, tech dudes should aim higher than Web 1.0 Banana Republic for their club looks, secondhand Russian models do not cut in front of me for the bathroom, and please Facebook invites die already. Also, promoters: if you’re going to charge $15-plus to get into a party, then at least do something with the lights beyond “set to default.” And throw a little fabric up or something! It’s not like you even have to design a flyer anymore. Give your event some ambiance.

But my love for the Bay Area club scene only grows with each place I visit and party I attend. We really do have a special freakish light that shines in the global night, an attention to quality and organic scene cultivation that could rightly be called artisanal. Not that it can’t be just plain bonkers, which it very much should be. I’m worried that club music is getting too mannered and club concepts too timid, too polite lately. If any scene can combine wisdom with absurdity, pop-ready energy with radical individuality, it’s ours. Hey you, throw a party!

The SF-via-Detroit Dirty Bird label head has developed such a delicious, instantly recognizable signature sound — booty bass meets tech-house somewhere in the Betty Boop-cartoon space jungle, timpani rolls and all — that it’s come to represent the Bay on a global scale. Almost every track in this genius mix is a recent winner, from Throwing Snow’s “Shadower” and Makossa Megablast’s “Soy Como Soy” to the infamous Thomos edit of Armando’s “Don’t Take It.” And when VonStroke drops that EPMD Easter egg toward the middle, I totally lose it. Plus, just as a control freak wink, the whole shebang is perfectly timed to end exactly at the 60-minute mark. This mix is a masterclass for DJs on how to gradually open up the bass on a system, but it’s also a much needed injection of ass-pumping humor into a somewhat poker-faced dance scene.

Detroit techno came back in a big way: witness packed appearances here by classic innovators like Virgo Four, Derrick May and Kevin Saunderson, MK, and Claude Young — and catch Juan Atkins this Sat/17 at Public Works. Even though more recent Motown musicmaker Omar S.’s gig here in October was a disaster of tech issues and flared tempers, his latest album It Can Be Done, But Only I Can Do It shone with old-school Detroit grit and mysticism. Especially this cut, which lifts me by my curlies into a blissfully mechanized futureworld.

One of those joyful, deceptively simple-sounding ditties that makes me so happy I want to die.

Who needs music at all, really, when you have a freaking realtime three dimensional polygonal projection happening in your face? The Brazilian trip-master took a gamble on a huge concept, of which his familiar, intriguing dubsteppy-to-ambient electronica tunes were only a part, creating a live spectacle that combined state-of-the-art animation with some good ol’ fashioned stagecraft — and kept the ILM employees around me at this year’s Warfield show shouting, “What?!?” Returning on New Year’s Eve for the Sea of Dreams party at the SF Concourse: don’t miss it.

One of the highlights of the jazzy broken beats eclectophile’s Fabric Live mix from September, this gorgeous track took the budding two-step UK garage vocal snippet revival a step further into melodic ecstasy with typical intelligence. Other post-dubstep garage snippet faves: “Another Girl” by Jacques Green, Blawan’s “Gettin Me Down,” Lando Kal’s “Further,” and “Fleur” by Sepalcure.

At a time of spectacular upheaval in North Africa, its most famous musical export scaled back the multiple electric-guitar polyphony and went more quiet and acoustic for this understated yet still complex masterpiece album. You’ll be swaying and clapping along in no time as the Tuareg band elaborates its entrancing epics. Also check out Tinariwen’s spunky cover of Nusrat Fateh Ali Khan’s “Mustt Mustt” with Indian-Canadian vocalist Kiran Ahluwalia.

Disco edits, re-edits, and general rejiggers kept flowing forth this year from laptops everywhere — great for rediscovering many “forgotten” artists, but kind of a poop-slush pile in the end. One would think most listeners’ sensibilities have extended to being able to countenance the full-on originals of most tracks by now. (DJ Bus Station John’s parties keep demonstrating this.) Still, many re-edits have a power all their own, as Tiger and Woods’ lovely, loopy album of chopped-to-bits examples, “Into the Green,” showed. This extended rework of Gwen Mcrae’s “Funky Sensation” by Project Tempo stuck in my ears all year, as did the Psychemagik rework Paula Cole’s “Feelin’ Love” and the insane, ADD woofer-wobbling minimalism of Late Nite Tuff Guy’s “One Nite in a Disco.”

Six killer tracks of sludgy techno that out-menaced most witch house, out-bassed most dubstep, and buried a bit of Burial. The boomin’ system from Hades, this, in an exceptionally nice year for deep roots techno from the likes of Kassem Mosse, Marcos Cabral, Levon Vincent, Planetary Assault Systems, Peter van Hoesen, and more.

THE WEEKND, HOUSE OF BALLOONS AND THURSDAY

Dance maximalism may have moved on to the pop charts from underground floors, but that doesn’t mean there aren’t quality big tunes being released. This retro-disco-acid hurricane, cheekily pressed at only 120 copies, takes off from maximalist classics like Adamski’s “NRG” and Hardfloor’s “Acperience1” with a bit of breathless Chic-ing over the top. All that’s missing is the exuberant saxophone (find that on M83’s awesome “Midnight City”). Other top tunes to the max: French Touch revamp “Aurora” by Fred Falke, “We Bros” by canny Manchester baggy outfit WU LYF, and, in an over-the-top conceptual-cinematic way, “Replica” by Ohneotrix Point Never.

NICOLAS JAAR, “SPACE IS ONLY NOISE IF YOU CAN SEE (DAVE AJU REMIX)” (CIRCUS COMPANY)

If Rod Serling sang you a lullaby in the Night Gallery, this is what it would sound like. The young Chilean, here remixed by the veteran San Franciscan, proved that in an era of too many DJs singing, with results ranging from pretty brilliant (James Blake, Matthew Dear) to OK (Trentmoeller, Maceo Plex) to just atrocious (Art Department), ratcheting things up into spooky Trip-Hop Land makes you critic-proof. Other lovely uncanny audio valleys I fell into: Dapayk and Padberg Feating Caro, “Island (Nôze Swimming Circles Remix)”; Alessio Mereu Featuring Roberta Prestigiacomo, “Magic Key”; Agaric, “Who Made Up the Rules (Josh Wink Remix).”