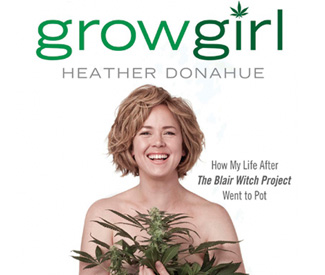 HERBWISE The average celebrity autobiography follows an arc of learning and growing. The earnestly-made mistake — whether in the form of childhood shenanigan or adult infidelity — and then the ensuing redemption. But rarely do book-sized treatises emerge from the decision to leave the celebrity fold for the greener fields of bud agriculture. Leave it to the girl from the Blair Witch Project to produce that one.

You know Heather Donahue’s snotface. Apparently too well, because as she writes in her new memoir Grow Girl: Once Upon a Time She Made The Blair Witch Project, Then She Went to Pot. Literally (Gotham Books, 286pp., paper, $26) — score nothing for succinct subtitles — too many people took the movie’s faux-reality premise seriously. Casting agents, it seems, couldn’t shake the feeling that this professional actress was merely a kid caught with a Camcorder when a malignant forest spirit got a bee in its bonnet.

But then she met a guy from Nuggettown (an actual place, renamed for anonymity). What ensued was a romance that left Donahue the proud renter of a secluded house in the wood and enough pot-growing equipment that she had to grow to stay afloat financially.

Such a pat story! Throughout Donahue’s at times overly flowery, but on the whole eminently readable narrative, the growth of her fellow (capital G) “Girls” mirrors her struggle against the confines of society — the larger, non-weed growing one but also more interestingly, the grower (capital C) Community of Nuggettown.

For not all is hunky-dory in the land of impressive tri-cone crystal formation. Women in Nuggettown are relegated to supporting roles — the kept “pot wife,” the “grow girl” that is often bossed about by her XY-chromosomed peers. On the cover of the book Donahue is clutching the top of a healthy bud plant to her naked breasts, a stereotypical male fantasy if there ever was one — but it’s ultimately all about empowerment. She blooms from a shattered ex-actress to a fuller human being, all under the Mondo Reflector she installs herself on the grow room ceiling.

One approach the medical marijuana movement might benefit from is humanizing its growers. Imagine a commercial like those for Florida oranges or California cheeses. A proud farmer fluffs up Mary Jane’s leafy bustle while a down-home voiceover plays in the background (“High CBD levels, if you want ’em. Donchaknow.”) Yes, your friendly medicine agriculturist is a person too, says Grow Girl. Possibly a person that reinforces gender stereotypes through a strict hippie code of conduct slash double standard, but a person with debts and passions and doubts nonetheless.

Donahue humanizes the cannabis industry. Some farmers, she writes, are making enough money to keep Nuggettown’s kayak store in business, but any conspicuous consumption masks the fact that it’s not really advisable for smalltown weed people to be saving their ducats in your run-of-the-mill local credit union. These are moms-and-pops, guys!

The book is slightly dated. The storyline ends in Nuggettown’s hope for a persecution-free Barack Obama presidency (Obama’s very promises rendered all the more poignant for today’s reader, informed of the President’s about-face on the issue of raiding state-legal growing facilities). For a brief moment, it seemed like cannabis would slough off the shackles of social stigma and claim to an honored position in our medical establishment.

That didn’t happen, of course — the feds raided Mendocino County’s Northstone Organics in October of this year, for chrissakes. But Mary Jane, still she rises, as does Donahue by book’s end, after agricultural disasters, horrendous break-ups, and shattered expectations.

So, Grow Girl is great if you like your marijuana stories imbued with a general sense of struggle. (And what other kind, really, exists these days?)