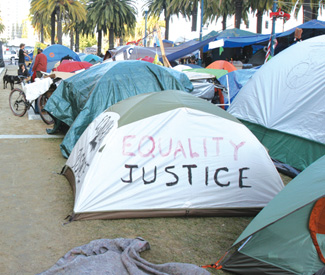 Another Occupy offshoot sprung up at San Francisco State University Dec. 1 when about 150 students attended a march and rally that culminated at Malcolm X Plaza, now the site of the San Francisco’s newest Occupy camp.

The highlight of the action came when SF State President Robert Corrigan arrived on the scene. The group was using the people’s mic to read a letter addressed to Corrigan, penned by the Occupy SF State General Assembly, demanding that he write two letters. One should be directed to the school’s chancellor and CSU Board of Trustees, “urging them to repeal the 9 percent tuition fee increase” that the board passed Nov. 16, and another should go to “the presidents of every other CSU campus asking them to also contact the chancellor and Board of Trustees regarding a repeal of the 9 percent tuition fee increase.”

Corrigan listened, then participated in a frank question-and-answer session with protesters, urging them to contact Sacramento legislators. Yet he refused to write those letters or declare support for Occupy SF State.

Afterwards, the students returned to Malcolm X Plaza and erected about 15 tents, which organizers said would contain “books, food, and homework help” along with providing shelter for sleeping protesters.

In the Mission, where city officials have been encouraging OccupySF to relocate from its current home in the Financial District, a separate new Occupy effort could be underway.

Organizer Enrique Del Valle says he and other organizers have been distributing flyers and talking to people and organizations throughout the neighborhood. “We’re getting it together to have a General Assembly,” he told us.

The effort is unrelated to the OccupySF General Assembly’s Nov. 29 decision to decline the city’s offer to utilize an abandoned lot at 1950 Mission Street, he added. Before the city made that offer, Del Valle, a community volunteer with connections with many Mission groups, says he was already working on forming a neighborhood occupation.

If Occupy SF had set up shop in the space offered by the city, “We would have worked with them,” he explained, “but set up somewhere else.”

Meanwhile, Mayor Ed Lee and OccupySF are still waiting for one another’s next moves. On the evening of Dec. 1, when San Francisco Police officers surrounded the camp in steel barricades, protesters felt another raid was underway. But they resisted and took down some barricades, causing police to suddenly back down and remove the rest.

“They’ve just been mindfucking us,” OccupySF protester Markus Destin told us. “As soon as they spend all that money breaking us down, we’ll just come back in a week and re-encamp.”

Mayoral Press Secretary Christine Falvey said Lee wasn’t aware OccupySF rejected his offer: “We haven’t heard back one way or another from the group. The offer is still out there and the group has all of the information they need from us. We are awaiting a decision. Mayor Lee has made it very clear to the group that he supports their first amendment rights and their right to assemble, but that overnight camping at Justin Herman Plaza is not an option for the long term because of the health and safety problems it creates.”

Community members rallied outside a foreclosed Visitacion Valley home Dec. 1 before moving their protest to the offices of the company that purchased the property.

At 11 a.m., dozens gathered in front of the residence where 75-year-old Josephine Tolbert had lived for nearly 40 years. A day earlier, Tolbert had arrived home with three young grandchildren in tow to find her locks changed. Organizers say the evicted resident needs to access the house to retrieve food and medicine.

The crowd — which included neighbors, friends, and members of Alliance of Californians for Community Empowerment (ACCE), Service Employees International Union (SEIU), OccupySF, and Occupy the Hood — demanded that Tolbert be let back in. According to Bayview resident and self-proclaimed “foreclosure fighter” Vivian Richardson, “They would not let her in to get food, diapers, or her diabetes medicine.”

Tolbert had run a daycare business from her home for 20 years. One of her regular clients, a mother with two young children, arrived during the rally. She was surprised to find that Tolbert was locked out of her home and unable to care for her children that day.

“I want to get in my home so I can resume my business,” Tolbert said. “That’s my occupation there, I don’t have any other way of caring for myself.”

The group then headed to the offices of True Compass Loan Services, LLC, the new owners of Tolbert’s home. About 20 supporters gathered at the Ocean Ave office, where ACCE organizer Grace Martinez singled out True Compass owner Ashok Gujral, who owns a $2.75 million home and multiple restaurants, according to a press release from a group calling itself the Foreclosure Fighters.

“The man is worth $10 million, and he has a bunch of limited liability companies,” said Martinez. “Everyone has been shocked at how this man could do this, he knows she is a senior.”

According to Martinez, Gujral personally refused to let Tolbert into her home Nov. 30. He and others from the company “don’t want her in there because they say she’ll refuse to leave,” Martinez added. Calls to Gujral’s office were referred to attorney Jak Marques, who did not return Guardian requests for comment.

A True Compass representative informed protesters “there’s no one here to talk to you,” then swiftly shut the door. But when a few protesters went around through a side entrance and let everyone else in, the group took their protest to the hallway inside.

They remained there for almost an hour, chanting, pounding rhythmically on the walls, and flooding the office on the other side of a locked door with phone calls, demanding Tolbert be allowed to return to her home to retrieve her medicine and belongings.

Five police officers arrived almost immediately as protesters entered company offices. One explained to the protesters that if they didn’t leave, they would face arrest for trespassing. A heated but measured back-and-forth ensued, in which protesters insisted that if Tolbert was his mother, the officer would feel differently. The officer, Lieutenant C. Johnson, responded, “If it was my mother — I don’t know. I have a house for my mother. But I feel for Josephine, and for the millions of other Americans in the same situation.”

Martinez quieted groans from protesters, replying, “You’re part of the 99 percent, and we’re not going to shoot the messenger.”

Organizers conferred and decided to leave the building voluntarily. Sergeant R. Young, who was also at the scene, told the Guardian, “It’s heartbreaking to do this. Their freedom of speech is a constitutional right that we take a sworn oath to protect.”

THE SEEDS OF A NEW AMERICA?

Does the Occupy movement signify a new beginning for America? Is history repeating itself? Is violence inevitable? These were some of the big questions pondered by a handful of prominent Bay Area writers, thinkers, artists, and activists Dec. 1 during a panel discussion organized by Salon.com.

Dan Siegel, who most recently made headlines for resigning as Oakland Mayor Jean Quan’s legal advisor because he disagreed with her decision to order a police raid of the Occupy Oakland encampment, was a panelist. “The perspective of Mayor Quan and other mayors, besides reflecting the 1 percent, reflects a misguided paradigm,” Siegel said. “The nation’s clearly in an economic crisis that this country has not seen since the 1930s. The mayors should be on the side of the 99 percent. They ought not be the lapdogs of Wall Street.”

Renowned author Rebecca Solnit also participated in the panel discussion. Asked if she thought Occupy symbolized a new beginning, she reflected on the past. “Huge mistakes were made on the left,” in past social movements, she said. “It was supposed to be the revolution, but the women were still expected to make the coffee.” She offered that Occupy represented an evolved manifestation that had benefitted from lessons learned over the years.

“It’s a culmination of decades of refining, searching, and building coalitions,” Solnit said. “It’s the beginning in the sense that summer’s the beginning. We’re reaping the fruit of … what’s been imagined.”

It’s also provided a spark for campus-based organizing. “The Occupy movement has given a tremendous amount of wind to the sails of the student movement and had a consciousness-raising aspect,” said Matt Haney, executive director of the University of California Student Association. “Now they are prepared in a new way to join all of those other folks who are also suffering.”

A key question put to panelists was whether Occupy ought to consider running candidates for office. In response, panelist Melanie Cervantes, an artist and activist, got to the heart of the issue. “What is political power? Is it just representation?” she asked.

Cervantes pointed out that autonomous social movements in Latin America have given rise to leftist political leaders, and she spoke of the past successes of mass-based organizations. “There were things that preceded us generationally, and they worked,” she pointed out. “There’s a lot of different ways people are experienced in trying to change things.”

Panelist Peter Coyote, an actor, activist, and founder of a radical underground group called The Diggers, offered an analogy in response to the idea of Occupy running candidates for office. “If you take a healthy goldfish and throw it into polluted water, it’s gonna get sick,” he said.

Solnit framed her answer as an analogy, too. “We live in a really crummy house with roaches and a leaky roof … Occupy is saying, let’s try to build a better house,” she said. “Our demand is for a better world, isn’t that obvious? We’re building a whole new political vocabulary, a whole new sense of possibility.”

As to the question of whether violence is inevitable as the movement continues to unfold, some panelists discussed nonviolence as a protest tactic, while others focused on the violent behavior of law enforcement officers against protesters. “You don’t hear students talk about using violence,” Haney said. “It’s more like how do we deal with violence that’s being used against us?”

Siegel stressed that the protests ought to be disruptive, yet nonviolent. “The question for our society is, who has the power?” he said. “At the end of the day, we live in a nation state, and people control things. And if they continue to control things, we’re screwed.”

Occupy Oakland organizers have been engaged in planning yet another shutdown of the Port of Oakland on Dec. 12, which will coincide with attempts to shut down West Coast ports in San Diego, Los Angeles, Portland, Seattle, Longview, Tacoma, and Anchorage. “On December 12, the Occupy movements in different cities will … effectively shutdown the hubs of commerce, in the same fashion that Occupy Oakland shut down the Port of Oakland on November 2nd, the day of our general strike,” according to a Call to Action on WestCoastPortShutdown.org. “The message to you from Occupy Oakland in the face of police raids and continued disruptions of workers lives by the 1 percent is the following: The Occupy movement will strike back and rise again! We will blockade all of the West Coast Ports on December 12th in solidarity with longshoremen, port workers and truckers in their struggle against the 1 percent!” Steven T. Jones contributed to this report.