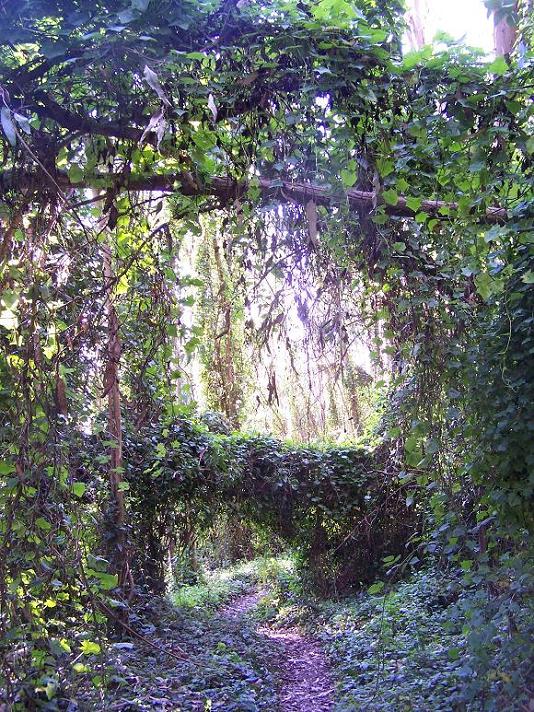 It’s easy to get a little romantic standing in a beam of filtered sunlight inside Mount Sutro Open Space Reserve. The 61-acre expanse of ivy and eucalyptus feels like a remnant of an earlier, wilder San Francisco.

But the densely tangled forest backing UCSF’s medical campus is actually man-made. It harkens back to the heyday of good old Adolph Sutro, bathman, silver magnate, and forest enthusiast. Sutro covered the mountain on his sandy property with many of the trees standing today.

Hoofing the Historic Trail, a mild romp of an urban hike, is a little bizarre. The behemoth mass of the UCSF Medical Center glints steadily through the trees, and yet it’s hard to shake the feeling that you’re deep in a damp cloud forest.

Today’s eucalyptus trees obscure a view that Craig Dawson, founder of the Mt. Sutro Stewards, says was once one of the best around. “Imagine roaming here on horseback and seeing these vistas,” said Dawson. “You could see both Angel Island and Alcatraz.”

Nowadays, you have to be willing to brave major poison oak and a steep off-trail grade if it’s an unfettered view you’re hankering for.

Dawson and his crew of volunteer trailworkers accidently uncovered the trail in 2006, and Dawson’s best guess is that it served joyfully meandering equestrians in the 1880s.

Now, the narrow footpath stretches from an unassuming Cole Valley gate to the lofty summit of Mount Sutro, where, strangely enough, the Cold War managed to make its mark. Rotary Meadow, the ending point of the Historic Trail, housed a Nike radar site – a high vantage point from which it was possible to order the launch of deadly anti-aircraft missiles a few miles away.

To access the Historic Trail, most people start in Cole Valley, on the west side of Stanyan where it meets 17th Street. A green sign on a small gate indicates the trailhead. The hike will gradually climb up through Woodland Canyon before reaching Medical Center Way, the large thoroughfare cutting through and around Mt. Sutro. The trail continues directly across the road and is marked with with two orange flags. For maps, check out www.sutrostewards.org