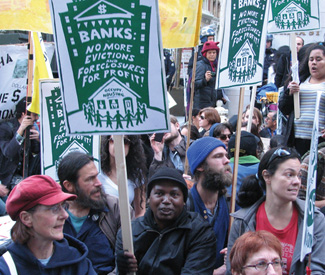 Pressed by foreclosures, evictions, and an economic crisis with the gnawing tenacity of an early winter flu, San Franciscans protested in neighborhoods throughout the city on Saturday, Dec. 3. Marches from four of the city’s most impacted neighborhoods merged in the Financial District to pressure landlords, banks, and what the Occupy movement has dubbed the 1 percent to ease the spreading hardship surrounding housing in San Francisco.

“The 99 percent tenants and homeowners can no longer let the 1 percent banks and real estate speculators destroy our city and our lives so we’re marching in the neighborhoods and on the streets today,” asserted the statement read by the Occupy SF Housing coalition to the crowd gathered in the Financial District. The message echoed through the glass and granite corridors in front of Wells Fargo, passed along in a thousand voices by the now ubiquitous “mic check” style of Occupy crowd communication.

Housing advocates warned that a steady stream of foreclosures, climbing rents, and lagging job opportunities are driving even native San Franciscans out of the city for the relatively affordable housing in the East Bay or forcing them out of the region altogether, transforming the face of San Francisco into an older, whiter, wealthier demographic.

Throughout the economic crisis, San Francisco as a whole has posted lower foreclosure rates than surrounding counties. At first glance, San Francisco, with one in 880 homes facing foreclosure, looks like a safe harbor in the state’s troubled residential real estate market compared with the statewide foreclosure rate of one home in 243, according RealtyTrac. That represents 55,312 residential units across the state. Nationally, one in 563 homes was in some stage of foreclosure as of October 2011, the most recently released numbers.

However, a near absence of foreclosures in affluent, stable, San Francisco neighborhoods like Pacific Heights and Noe Valley hide troubling foreclose rates in the city’s blue collar ZIP codes that far exceed national and statewide levels. In the 94124 zip code that includes the Bayview and Hunters Point, one in 180 homes received foreclosure filings, higher then Oakland’s overall average rate of one in 245 homes — levels that reflect the experience of some of the nation’s most hard hit areas.

Of the 1,513 homes currently listed on the San Francisco housing market, 1,255 were in the pre-foreclosure, auction, or bank-owned stages of the foreclosure process, representing roughly 82 percent of the available housing stock.

At the downtown headquarters of Wells Fargo, Occupy protesters were placing some of the blame for the deepening hardship at the feet of the big banks. According to the Occupy SF Housing coalition, Wells Fargo is the mortgage lender for 226 homes in San Francisco that are in some stage of foreclosure. That represents about 18 percent of the total homes in San Francisco under foreclosure.

In neighborhoods like Hunters Point, these evictions have turned into an economic cascade of household wealth in decline, even for those who have managed to hold onto their homes.

With foreclosures flooding the market, the median sales price for homes in Hunters Point from Aug. 11 to Oct. 11 was $167,500. This represents a decline of 13.2 percent, or $25,500 per home on average, compared to the prior quarter. Sales prices have depreciated 62.6 percent over the last five years in Hunters Point, wiping out equity families have built over years, and leaving those who hang on stuck in underwater mortgages, where their debt far exceeds the value of their home.

“Predatory equity loans make a quick profit (for the lender) at the expense of home owners in the Bayview,” said Grace Martinez of the Alliance of Californians for Community Empowerment (ACCE). “There are 11 homeowners on a two-block stretch of Quesada in default or have already lost their homes.”

While the Obama administration has tried to ease the foreclosure crisis through the federally subsidized Home Affordable Modification Program (HAMP), only a small percentage of people who apply through their mortgage holder for relief under the program receive a loan adjustment. At Wells Fargo, only one in five borrowers applying for HAMP relief have received a loan modification.

Protesters sitting in the streets in front of Wells Fargo demanded that the company establish a moratorium on all foreclosures until it reforms its loan modification practices, halts the eviction of homeowners who have faced foreclosure, and instead offers them a rental option to keep them in their homes — a solution they say will ease the suffering of those caught in the middle of the banking crisis.

The banking and real estate driven economic crash has lead to the largest drop in home ownership nationally since the Great Depression. At the same time that home ownership has become increasingly out of reach for many San Franciscans, increases in rental rates and high competition for rental units are driving out many blue collar San Franciscans from the transit-friendly Mission District, in favor of a generally younger, wealthier, more educated, tech-savvy population.

As rallies took place across the city Saturday in the lead up to the afternoon’s Wells Fargo protest, a group of concerned residents and community groups gathered at 24th and Mission to highlight San Francisco’s other housing crisis — the rental market. The other marches started in the Castro, the Bayview, and the Tenderloin.

Much of the turnover of long-occupied rent controlled housing units in San Francisco comes as a result of the Ellis Act, a state law that allows evictions when an owner’s family wants to move in or when the unit is taken off the rental market. Brenda Nedina’s family is facing an Ellis Act eviction at 874 Shotwell Street.

“I’ve lived in that unit my whole life. My family has lived in the unit for 28 years,” said the tearful, 25-year-old San Franciscan native. “We would love to stay here, but with rents so high, it is not likely that we would find a place in San Francisco.”

Nedina, who works a service industry job at Pier 39, says the economic crisis has made it more difficult for her survive in San Francisco. She has had to cut down her college course load to get by in the tough economy. The troubles will get more complicated if her family is priced out of the city, as critical health services that they rely on are available through their San Francisco residency.

“A lot of people suffer through this as a private problem, but we are making it a public problem, and if the problem belongs to all of us then so does the solution,” said Maria Poblet of Just Cause, hugging a tearful Nedina as she addressed a crowd gathered at 24th and Mission streets.

Latino families like Brenda’s continue to be forced out of the Mission District by rising rent, and less economic opportunity for them in the recession. According to the 2010 U.S. Census, the past decade has seen a 22 percent decrease in the Mission’s Latino population.

“With the help off the 99 percent and with right on our side we are going to fight this and we are going to win,” said Powell, whose gallery next door to Philz Coffee is a cornerstone of the neighborhood’s multi-ethnic arts scene. The San Francisco Rent Board has received more than 4,000 petitions to remove rental units from the real estate market since 1999 through the Ellis Act. While Ellis Act evictions have seen some decline during the economic crisis, more Ellis Act evictions are now concentrated in the Mission District, where 40 percent of all Ellis Act petitions are now filed. At the same time, evictions based on breach of lease throughout the city are on track to double pre-recession numbers this year as more and more San Franciscans are have trouble earning enough to keep up with the city’s exorbitant rental rates. According to Just Cause, the average rent for a two-bedroom apartment in the Mission District is now $2,497. “The only way to keep our Chinese, Latino, Arabic, English speaking neighborhood is to fight like hell for our homes,” said Poblet. “Even before Wall Street was occupied, we have been defending this neighborhood. This is the neighborhood of the 99 percent.”