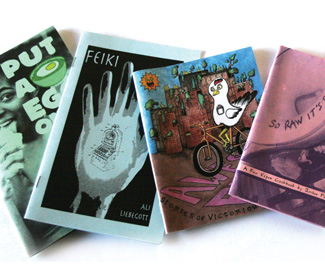 LIT For the winter holidays many years back, I received a long-arm stapler. It wasn’t a surprise, I’d expressly asked for it. And no, I was not a teenage office supply fetishist.

I wanted the stapler because I wrote, cut-and-pasted, and hand-assembled my own zine, and that process was about to get a lot more efficient, thanks to my new long-arm. Those who’ve crafted their own DIY booklets know the thrill of the further-stretching stapler that meets the paper crease.

While the Web has undoubtedly taken some oomph away from the world of paper zines (though in some cases, it simply enhances viability), there are people, shops, and art collectives that remain dedicated to the physical craft. It’s all for that undeniable, hold-in-your-hands, flip the pages, hard copy appeal of print.

And not all zines are of the cut-and-paste, photocopied variety, mind you; some are works of elaborate graphic art, others speak to controversial topics that tend to get ignored by mass media. Some, like Put An Egg on It, which I picked up at Dog Eared Books (900 Valencia, SF. 415-282-1901, www.dogearedbooks.com) in the Mission District, offer cooking tips matched with eye-popping color photos. Additionally at Dog Eared, I grabbed a zine on the history of wigs, an infographic on young Marlon Brando, and a booklet with pencil drawings of octogenarians alongside live-long advice.

Jennie Tanouye, an assistant manager at Oakland magazine mecca, ISSUES (20 Glen, Oakl. 510-652-5700 www.issuesshop.com ), concurs. The majority of the zines that ISSUES sells are physically brought in by creators to sell on consignment. The store’s main criteria for zines is that they must be made locally. Other than that, topics are all over the place: graffiti, cooking, photography, a cat-rabbit psychic detective (Roman Muradov’s P/d Indigest).

One new zine Tanouye points out is by a Japanese artist who was visiting the Bay Area. Junya Matsumera’s San Franshizuko is a dialogue between a character called Shizuko and passages from Jack Kerouac’s On the Road, interspersed with photos. There also is No Gods No Matress #15, an autobiographical zine by Enola D. with a theme this issue of breakups and their aftermath. Trans male quarterly Original Plumbing, feminist political punk zine Doris, and parenting and fatherhood zine Rad Dad are some of the perennially popular offerings at the store.

Tomas Moriz is the force behind Rad Dad, a series he created six years back that’s now past 20 issues. Before Rad Dad, he created Boxcutter, and now, he’s starting a new one about teaching and the East Bay — and he’s looking for contributors. He’s a longtime preacher on the beauty of zines, but also doesn’t disparage blogs.

“I don’t believe the zine/blog dichotomy is antithetical. Blogs are cool. But…there’s something sexy about zines, something private and personal, which a blog will never have,” he says, adding, “One of the main contributors to Rad Dad found a copy of it on BART. He read it and then became a key contributor. You will never find a blog in a park or shake hands and exchange blogs at a punk show.”

This weekend, Moriz is hosting one of a few local zine fairs — the East Bay Alternative Press Book Fair (the unaffiliated San Francisco version was back in fall, and the Rock Paper Scissor collective’s East Bay Zine Fest was a few weeks back). The fair will include 39 full tables and 16 half table vendors, and this year — it’s the event’s second time around — Rad Dad‘s teenage daughter, Zora Moniz, will be tabling a zine.