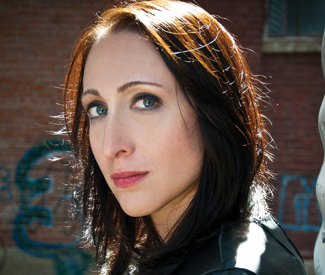 LIT If you’re shopping for that special thriller fan on your list, you might want to pop an I.O.U. into his or her stocking: the best thriller of the year doesn’t hit bookstores until Dec. 27.

That would be The Innocent (Crown, 336 pp., hardcover $24) by Taylor Stevens, who came out of nowhere to hit the New York Times bestseller list with her first novel, The Informationist. Stephens back with the same series character (Vanessa Michael Munroe), the same edgy but brilliant prose, and a plot that takes us into the real — and chillingly autobiographical — world of an abusive apocalyptic cult.

That’s where Stevens grew up: she was born into the Children of God, where nobody was allowed more than a fifth-grade education, adults took sexual advantage of teenagers, young women were forced into prostitution (all in the name of recruiting new members), and adults were almost as frightened to leave as to stay.

There’s a bit of a J.K. Rowling story here: Stevens started writing The Informationist when she arrived in Houston with her then-husband and two kids. With no job skills, just out of the cult, her family was living on minimum-wage jobs, barely scraping by — and after buying a Robert Ludlum book at a garage sale, she decided to write a thriller. “I was really, really just scraping by, it was horrible,” she told me in a recent phone interview.

“Selling The Informationist changed everything.” Although the money from the bestseller hasn’t fully trickled down to her, “if I want to buy something for the kids, It’s actually possible now.”

The Informationist introduced the world to Monroe, who is slight, sexy, and moves back and forth easily between male and female appearance. She kicks serious ass, speaks 22 languages and peddles black market information. Her childhood was harsh; she spent her teens living with a violent gunrunner in Africa, but the wildness and the pain were the only elements of Stevens that made it into the first book.

Yet Stevens told me she had to write about the cult world at some point. “People keep asking me what my life was like,” she said. “So I can tell them — if you want to know what it was like growing up, read this book, that’s what it was like.”

The characters, she said, are fictional, “but everything that happens in the book happened to someone.”

The Innocent is set in Buenos Aires. A five-year-old girl named Hannah is snatched and brought into the world of The Chosen, led by a charismatic figure known as The Prophet who refers to the world outside the cult at The Void.

Hannah’s father has been searching the world for her, and discovers that the cult is hiding her in Argentina. He convinces Munroe to go in and get her. That involves slipping into the world of the cult herself — and in the process, Stevens shows us a life that very few people have ever experienced. Among the most painful elements: Once Hannah is rescued, she isn’t sure she whether she wants to go back.

Along the way, of course, is vintage Michael Monroe action, including an escape from four armed men in a locked warehouse. (Munroe is better with a knife than most mob thugs.)

The Innocent, for whatever reason, isn’t as raw as The Informationist. There’s less blood and less intense violence. And Monroe is developing as a character — the cold face that she showed us last time is mellowing a bit, and in The Innocent, she even kinda, sorta falls in love. Maybe.

There’s always a challenge in continuing-series characters, and writers have struggled with it since the advent of the modern pop-culture novel. Ian Fleming got bored of James Bond after a few books, and you could tell. John D. MacDonald let Travis McGee get old before his time. Robert. B. Parker never let Spenser change much, but he was Spencer, and that was always enough. Lee Child is struggling to keep Jack Reacher from becoming a caricature of himself.

Stevens is still in the early stages; she told me she’s not even sure where Monroe is going next. Which is why, I think, The Innocent works, and the next one will work, too — you really sense that the writer is growing with her protagonist in this, the best thriller series in a long time.