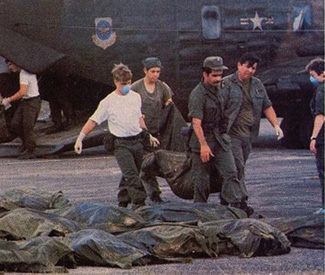 LIT “As one survivor told me,” author Julia Scheeres writes in her introduction to A Thousand Lives: The Untold Story of Hope, Deception, and Survival at Jonestown (Free Press, 320 pp., $26), “nobody joins a cult.”

I remembered this refrain, possibly spoken by the same survivor, from Stanley Nelson’s 2006 Jonestown: The Life and Death of Peoples Temple. Recent works like Nelson’s film and Scheeres’ book suggest perceptions about Jonestown are shifting away from sensationalism. The broad strokes are well-known: a charismatic, maniacal preacher; a jungle settlement; over 900 people dead, including a Congressman; a vat of poisoned punch. But the story — explored in A Thousand Lives as a deeply disturbing human tragedy on a nearly unthinkable scale — neither starts nor ends there.

Scheeres, who keeps an office in the San Francisco Writers’ Grotto, pored through recently-released FBI files while researching A Thousand Lives. “The FBI released its files on three CDs, without a real index. So a letter that started on CD one, page 20, could end on CD three, page 350,” she remembers. “Organizing the material — 50,000 pages of documents — a lot of it was really boring shipping manifests. Crop reports. But then, oh, hey! Here’s a memo from the camp doctor discussing with [Jim] Jones how they’re gonna kill everyone.” Building from this material, the book focuses on five Peoples Temple members and views the experience of Jonestown through their eyes.

“[I chose my subjects] based on whether they were still alive, and I was able to interview them at length, or whether they had left a lot of primary source documents behind,” she says. “I also wanted to talk about the different demographics of the church, so you have old, young, black, white. A woman who has an MFA from San Francisco State, and a young black man with a GED from Oakland.”

Though A Thousand Lives does offer some background on Peoples Temple founder Jim Jones, “I wanted to know what it was like to be a rank-and-file member of the church,” Scheeres says. She uncovered powerful evidence that Jonestown was not a mass suicide, as the unfortunate phrase “drinking the Kool-Aid” suggests. Instead, she says, “it was a mass murder.”

As suggested by that sinister memo from the camp doctor, A Thousand Lives’ most startling revelation is that Jones had been fixated on killing his followers long before the events of November 18, 1978. According to Scheeres, he considered loading his congregation onto buses and plunging them off the Golden Gate Bridge, or onto a plane “and having someone shoot the pilot.” (Eerily, he even sent one of his followers to flight school in preparation.)

Soon, though, he was consumed by the idea of Jonestown: “a new society in the middle of the virgin jungle, a utopia that would be free of sexism, racism, elitism, and all other evil-isms,” Scheeres writes. The promises of Jonestown echoed Jones’ seemingly progressive message of equality, which is what attracted most Peoples Temple members to the church in the first place. It was also what had endeared Jones to San Francisco politicians, who were in awe of his ability to “mobilize thousands of people to vote,” according to Scheeres.

But in reality, “he had no desire to see his followers flourish in South America. He was already fantasizing about their deaths. Would his people die for him if he asked them to?” Turns out they had no choice. While she was writing A Thousand Lives, Scheeres took a trip to Guyana and visited what’s left of Jonestown.

“It’s remote, dense jungle,” she says. “Everything looks the same. It would be so easy to get lost. And as you’re walking through, you can hear things slithering in the leaves. Jim Jones told [his followers] that if they tried to escape, they’d be killed by ‘mercenaries’ — really, his sons that were [hiding and] shooting on the camp — or they would be killed by the jungle animals.”

Of course, when they left San Francisco, more or less willingly, Peoples Temple members — like Scheeres subject Hyacinth Thrash, an elderly African American woman who dreamed of a place where racism didn’t exist — expected to find a “utopia,” as they’d been promised.

“[Jones] was so suave and gentle in San Francisco, and would tell you what you wanted to hear, like the ultimate caring father figure. Then once he got down to Jonestown and had everyone trapped there, he just turned. You can hear him on those tapes just screaming, you know. ‘You old bitch, you’re gonna die!’,” Scheeres shudders. “The rank-and-file had no idea that he had this ideation of ‘revolutionary suicide’ until it was too late. They couldn’t escape. They were surrounded by guards holding crossbows, and behind them, a circle of guards with guns, and basically told, ‘If you don’t drink the poison, we’re going to shoot you.'”

Though she has no direct personal connection to Jonestown, Scheeres’ own background, detailed in her 2005 memoir Jesus Land, made her an unusually sympathetic outsider. “The interests aligned: race, religion, seclusion. When I was a teen, my brother and I were sent to this religious reform school in the Dominican Republic, where all of our communications with the outside world were censored, where all of these horrible things were happening that we couldn’t let anybody know about,” she says. “Obviously my situation wasn’t as bad [as Jonestown]. The head of the school wasn’t goading us toward revolutionary suicide. But the whole sense of powerlessness and feeling trapped and helpless — I could identify with that.”

Decades later, Jonestown continues to fascinate; dozens of books have been written by survivors, relatives of survivors, conspiracy theorists, cult experts, and scholars of macabre history. A Thousand Lives — meticulously researched, and written with clear-eyed, sensitive perspective — is a valuable resource for readers seeking truth, not misinformation, about the tragedy.

“Most people under 40 probably don’t remember Jonestown well, if at all. But most people have heard the phrase ‘drinking the Kool-Aid.’ I find that phrase very offensive, because they didn’t drink the Kool-Aid. First of all, it wasn’t Kool-Aid, it was Flavor Aid. Second of all, they were forced to drink the poison. ‘Drinking the Kool-Aid’ implies naïve, stupid, not thinking, kind of dumb, following the leader, and not questioning. And they were questioning. That’s what my book argues throughout,” the author says. “They argued with Jones: ‘We didn’t come down here to die. We came down here for a better life for ourselves and our kids.’ So I think ‘drinking the Kool-Aid’ needs to be excised from the cultural lexicon.”

What’s more, “I hope people will reconsider the conclusions of Jonestown after reading the book,” Scheeres says. “I think it’s a tremendously compelling tale; 918 people died that day, as a result of Jim Jones, and younger generations need to be cognizant of that. Again, he had his people trapped in Guyana, so by the time they were saying, ‘I want to go home’ — and that’s another heartbreaking thing, was finding all these notes from people to Jim Jones, saying ‘I want to go home. I want to go back to San Francisco. I hate it here. I’m miserable. My children are afraid and I don’t know how to tell them that death is a good thing’ — [it was too late]. Reading all of those notes, these voices have been silenced. Now, finally, I feel like I am the loudspeaker, or their medium for letting their voices be heard. It’s too late [to save them]. They’ve been dead for 33 years. But for the record — they did not want to die.”