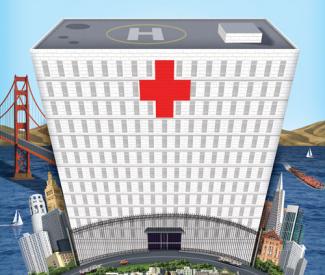 A new study has found that the California Pacific Medical Center (CPMC), an affiliate of nonprofit Sutter Health, provides far less charity care per paying patient than other hospitals in San Francisco even as it makes by far the most in profits, highlighting an issue that many city officials have raised as CPMC seeks permission to build a high-end new hospital on Cathedral Hill.

The study by UC Hastings College of Law is called “Profits & Patients: the Financial Strength and Charitable Contributions of San Francisco Hospitals,” and the Guardian reviewed an advance copy before its official release this Thursday. It compares CPMC’s hospitals with St. Francis Memorial Hospital, St. Mary’s Medical Center (both are Catholic Healthcare West facilities), and Chinese Hospital.

“Mainly due to Sutter Health’s plan to alter its current hospital structure within San Francisco, the provision of community health benefits by San Francisco hospitals is now a major issue before the Planning Commission and Board of Supervisors,” the report reads.

Even before that project, CPMC/Sutter is the dominant health provider in town, and by far the most profitable. Between 2006-2010, the report says the company made $743.9 million in profits from its San Francisco operations, compared to St. Mary’s $22.6 million in profits and the $14.8 million loss by St. Francis.

CPMC runs four of the largest hospitals in the city – St. Luke’s Hospital and CPMC’s Davies, California, and Pacific campuses – behind only San Francisco General Hospital, the city-run facility that does by far the most charity care. But while the other hospitals in the study are smaller, with much less staffed bed counts, they still manage to see the same or more charity care patients than CPMC.

Hastings Professor Mark Aaronson, who put together the study, said that charity care is supposed to be at least 3 percent, the minimum expectation for the San Francisco Board of Supervisors. CPMC’s is closer to 1 percent.

Why is it so low? If you ask CPMC, it’s not. “It depends on how you calculate it,” said CPMC spokesperson Kevin McCormack. “As a dollar amount, we give more in charity care than any other hospital expect for General Hospital.”

Well, obviously. CPMC is a massive conglomerate that has four campuses to maintain and put money into to have the beds and staff available. Having so much more space than any other hospital, they would have to put in more as a dollar amount just to sustain those campuses.

Given that CPMC is a non-profit organization, where does that extra few tens of millions of dollars go? Well, some of it goes to hire the huge team of consultants and lobbyists who are now trying to win approval for the Cathedral Hill project. But McCormack said it also gets absorbed into CPMC operations.

Even so, the report shows CPMC to be in a different category than other hospitals when it comes to supporting San Francisco’s full population. It also found that the profits extracted from San Francisco’s hospital subsidize the whole chain, a situation that will only become more pronounced as it builds a hospital at Cathedral Hill that seeks to draw patients from around the country.

The report was prepared for the Good Neighbor Coalition, Coalition for Health Planning — San Francisco, and Jobs with Justice. The official public release of “Profits & Patients” will be at 11 am on Thursday, Dec. 8, at the UC Hastings College of the Law, 100 McAllister St., Room 300, San Francisco.