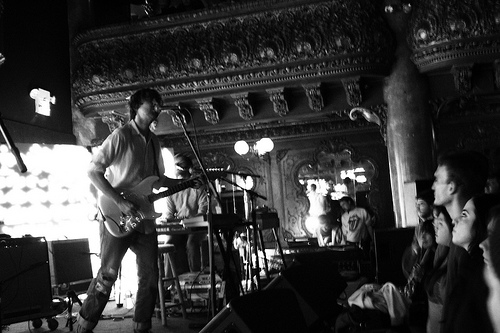 There’s been a lot of talk about how Cass McCombs is an impenetrable character, so much so that it’s become tiring. We’ve heard about his elusiveness and nomadic lifestyle; about his tendency to either act bitterly in interviews (i.e. Pitchfork interview) or shun them altogether. Oh, and that he’s never happy. Admittedly, McCombs has shaped this cryptic persona himself — he’s even made it difficult to know what he looks like (recent photographs have been vague, he’s always altering his “look”). It was an enormous pleasure then on Sunday night to be able to experience the songwriter first hand when he performed at the Great American Music Hall, where it was all about the music.

Before a dazzling wall of batting lights, McCombs stood with his band and seemed to take pleasure in every moment of the concert. The audience gave him a very warm reception and was perhaps appreciative for the same reasons I was — at long last we were having our own experience of McCombs.

The better part of the set was downtempo and tinged with melancholy. Wit’s End, the first of two albums that he released this year on Domino Records, is slow, ethereal, and rooted in what feels like the aftermath of tragedy. Listening to the band perform the single from that record, “County Line,” was grand. If one didn’t appreciate how lovely and original that song was before, one certainly did after last night. It has the mood of an R&B track, and the slow, hushed rhythm section seems to reflect the hopelessness of McCombs’ voice as he sings so simply “you never even tried to love me / what do I have to do / to make you want me?”

Humor Risk, McCombs’ second album of this year, is an effective supplement to Wit’s End in a live context. Compared to Wit’s End, it’s a more buoyant and melodic album. When the band performed songs like “The Same Thing” and “Robin Egg Blue,” it felt like McCombs was taking the audience up for a breath of air before plunging it back into the chilling gloom of Wit’s End.

Earlier in the set, the band performed “Bradley Manning,” a song that McCombs premiered a few days before on the television news show Democracy Now. The “protest” narrative tells the story of Bradley Manning — the 23-year-old intelligence analyst that was arrested for dispatching thousands of classified documents to Wikileaks. McCombs’ detailed story-telling recalls Bob Dylan’s “Hurricane,” and it was played to shouts and whistles of approval from the audience. “Bradley you know you have friends even though you’re locked in there,” McCombs says at the very end of the song. It was one of the highlights of the night. How many of us had forgotten about Bradley Manning, and how many are now discussing his arrest?

As the audience poured out of the venue then, the overwhelming thought on everyone’s mind was probably not “who is Cass McCombs?” but something like “wow — so that’s Cass McCombs.”