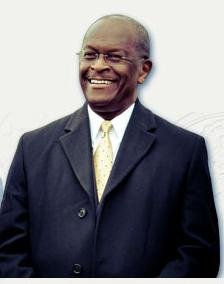 Sexual harassment is serious, and Herman Cain ought to be held to account for the sizable number of allegations against him. (Really, whatever Cain says, most women don’t make this stuff up; going public is painful enough). The charges that he had an affair? Whatever — that’s none of my business or anyone else’s. But in the GOP world, being “unfaithful” is a pretty serious sin (unless, of course, your name is Newt Gingrich).

Still, it’s pretty creepy that he’s set up a “women for Cain” website, with some truly bizarre testimonials:

**”I first saw Mr Cain on the day he announced his presidency! I absolutely loved his upbeat attitude about my country! Then he smiled … how long has it been since we have seen a sincere smile from a political candidate!

**I am with you all the way Sir!!!!!!!! We need someone that believes in GOD, life and liberty

**Mrs. Cain, Joshua 1:6 says, “”Be strong and courageous, because you will lead these people to inherit the land I swore to their forefathers to give them.” I am praying for you and Mr. Cain…that God would protect you and give you courage to be obedient to Him…whatever He asks.

**Dear Mr Cain many years ago I find this not so unique for christians I knew a man Charles in died at 54 i knew him and and his wife and they were beautiful from the heart christians. at one point in my live i was going to lose my home and well he heard about it, so me at Maass and told me Adrinne I want you to go down to the bank Monday and there wil be a check for 40.000 dollars. I told him I dont know how in the world i would pay it back and he just said don.t worry you are young and you have your whole live to pass a blessing on to someone else, At any rate he died at 54 of a heart attack and when I went to the funeral I was not surprised to see at least 500 or more people at his funeral and I went up to his wife and she told me has helped so many people his whole life and I looked in those green eyes with flowing tears and I said I was one of those people!

Whoa. These are the supporters of Herman Cain. I wonder what Women for Gingrich would look like.