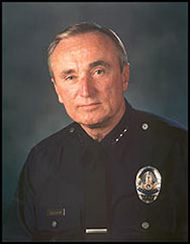 The video images are already iconic, a line of young students sit cross legged, arms linked, at the front edge of an Occupy UC Davis protest, nonviolently protesting the impacts of the economic crisis on the University of California and beyond. As police step forward students begin to chant “the whole world is watching,” and officers disperse fire extinguisher size canisters of pepper spray into the faces of the seated students.

As is turns out the students were right, the whole world was watching, leaving UC Davis with a public relations nightmare that has left the campus police chief and two officers on administrative leave. In the wake of the incident, UC President Mark G. Yudof established an independent review to be conducted within the next 30 days, naming former Los Angeles Police Chief, Bill Bratton, now chairman of Kroll Security, to lead the investigation.

“My intent,” Yudof said, “is to provide the chancellor and the entire University of California community with an independent, unvarnished report about what happened at Davis.”

While UC Davis touts Bratton as “a renowned expert in progressive community policing,” deep questions surround the choice of Bratton. The Council of University of California Faculty Associations (CUCFA) was quick to question the independence of the investigation of police violence at UC Davis, pointing out that Bratton, through Kroll, already holds contracts with the UC system.

“We already know that Kroll has provided security services to at least three UC campuses for the past several years. This in itself would disqualify Mr. Bratton from participating in the investigation,”said CUCFA president Robert Meister. “You would be illustrating the kinds of connection between public higher education and Wall Street that the Occupy UC movement is protesting.”

Bratton also served as president of the Police Executive Research Forum, the police non-profit that facilitated controversial phone discussions between major metropolitan police chiefs in the lead up to the crackdown on the Occupy movement across the nation, raising questions about his ability to lead the UC Davis investigation.

Bratton’s offical bio from the LAPD shows the depth of his involvement in PERF when it states, “He is also the only chief executive to serve two terms as the elected President of the Police Executive Research Forum (PERF).” Bratton was instrumental in the creation of PERF’s hardline 2006 report Police Management of Mass Demonstrations http://www.policeforum.org/library/critical-issues-in-policing-series/MassDemonstrations.pdf for which he receives special recognition in the acknowledgments section of.

“PERF gathered more than 100 invited practitioners and stakeholders at an international forum in San Diego in December 2004 to highlight issues related to mass demonstrations and use-of-force. At this event, Los Angeles Police Chief William J. Bratton set the scene for a lively interaction as he discussed the changing nature of protests and mass demonstration events. He recalled that in the 1960s the issues leading to demonstration events tended to be more community-centered and that the police focus was largely tactical. He noted that today, demonstrations are sometimes orchestrated by far-reaching national and international organizations, coalitions and informal groups subscribing to anarchistic methods,” reads the report.

The manual pays special attention to managing media messaging, devoting a section to media in the wake of a major demonstration: “An integrated media strategy seeks to manage and harness the media attention in order to help achieve the overall policing objectives. By partnering with the media, the potential increases for all parties to win, public confidence to be maintained and the reputation of the law enforcement agencies to be enhanced.”

Though Bratton has moved on as PERF’s president, he keeps close ties with the organization. In April , Bratton was the keynote speaker at a PERF conference on technology and policing held in Washington, DC, a subject Bratton is an expert on due to his role in developing the controversial CompStat system used to “predicatively model” crime in some metropolitan areas.

Bratton is widely recognized as the leading proponent of the “broken windows theory” of policing, which advocates a zero tolerance approach to petty crime. Speaking to the Telegraph(UK) this summer about the historically large youth riots in the UK, he said youth were “emboldened” by over-cautious policing.

“To be effective, a police force should have ‘a lot of arrows in the quiver,’ said Mr Bratton, advocating a doctrine of ‘escalating force’ where weapons including rubber bullets, Tasers, pepper spray and water cannon were all available to commanders,” the paper wrote on August, 12 2011.