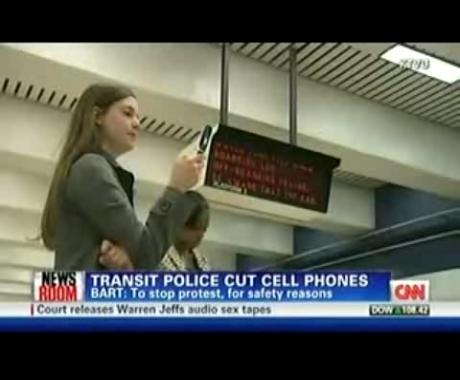 The Bay Area Rapid Transit (BART) Board of Directors has adopted the nation’s first policy outlining the circumstances under which cell phone service can be suspended. The policy comes in the wake of BART’s disruption of cell service in a bid to preempt an August 11 anti-police brutality protest that was called to highlight the July 4 police slaying of Charles Hill by BART police at San Francisco’s Civic Center station.

That cell service cut thrust BART into the middle of a national debate over if and when it is appropriate for government agencies to cut cell service to the public. The fallout included multiple rush hour protests against BART this summer led by activists with No Justice, No BART and supporters of the hacker group Anonymous. In the wake of the controversy, BART directors set out to create a policy outlining the circumstances under which BART would cut cell service in the future.

“The intent of this cell phone interruption policy is to balance free speech rights with legitimate public safety concerns,” BART Board President Bob Franklin said. “This policy, with input from the Federal Communications Commission and the American Civil Liberties Union, will serve as a pioneering model for our nation, as a reference to other public agencies that will inevitably face similar dilemmas in the future.”

The policy was quickly adopted yesterday at the BART board’s regular meeting by a vote of 7-0, with directors Lynette Sweet and Joel Keller absent for the vote. The policy states cell service will be “interrupted only in the most extraordinary circumstances that threaten the safety of District passengers, employees and other members of public, the destruction of District property, or the substantial disruption of public transit service.”

What remains unclear is if BART’s controversial decision to cut cellphone service in order to prevent protest would have been justified under the new policy. In the lead up to the policy, BART directors said their aim was to craft a policy to be used in the most extreme emergencies, and not against the free speech rights.

“If we were faced with the exact same situation, we would not shut off cell phone service,” Franklin said, “we would arrest people.”

However, in the wake of the action, BART asserted in an official statement that, “Organizers planning to disrupt BART service on August 11, 2011 stated they would use mobile devices to coordinate their disruptive activities and communicate about the location and number of BART Police. A civil disturbance during commute times at busy downtown San Francisco stations could lead to platform overcrowding and unsafe conditions.”

BART would seemingly be justified in a disruption cell service in these circumstances under the new policy, as the planned protest represented in the eyes of BART officials both a perceived risk to safety and a potential for service disruption – the stated strategy in the announcement of the August 11 anti-police brutality protest.

The judgment call on where to draw the line in emergency circumstances will rest with predesignated top BART officials. Those officials will be obligated to immediately inform BART’s directors of any disruption of cell service.

Federal Communications Commission Chairman Julius Genachowski said BART’s policy was an important step towards responding to the incident, but he cautioned, “the legal and policy issues raised by the type of wireless service interruption at issue here are significant and complex.”

He said that the FCC will be undertaking a review of the issue and will “consider the constraints that the Communications Act, First Amendment, and other laws and policies place upon potential service interruptions.”