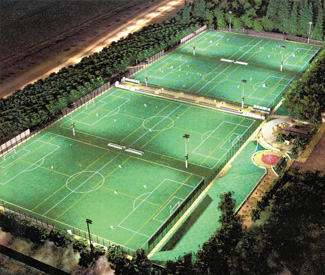 Golden Gate Park and Ocean Beach have long been destinations for locals and tourists to take in natural beauty within an urban setting, but a controversial plan to build a complex of artificial turf soccer fields at their intersection is drawing opposition from neighbors and environmentalists.

The project seems to belie the original intent of Golden Gate Park as a uniquely wild setting. The Master Plan for Golden Gate Park, drafted in 1995, emphasizes environmental stewardship and maintaining the park in a natural, multi-use way. Among its provisions are “major meadows and lawns should be adaptable to host a wide variety of activities, rather than designed for a specific use.”

But the Recreation and Park Department (RPD) and sports advocates are pushing a plan to install seven acres of synthetic turf fields, complete with 60-foot, 150,000-watt lighting that will shine until 10 p.m. year-round.

The project will have its first major public hearing before the Planning Commission on Dec. 1 at 5 p.m. in Room 400 at City Hall. Public comments on the project’s Draft Environmental Impact Report, which was released in October, will be accepted at the Planning Department until 5 p.m. on Dec. 12.

Critics of the plan, including the Ocean Edge Steering Committee, have been distributing educational materials and trying to energize people to oppose a project that the group says runs counter to the park’s purpose and which will harm wildlife and cause other negative impacts.

The fields are slated to be installed over the four existing run-down grass fields in the Western Edge of Golden Gate Park, which sits directly across from Ocean Beach and next to the Beach Chalet historical building and restaurant. The project is projected to cost up to $48 million, about $20 million of which comes from the Clean and Safe Neighborhood Parks bond measure approved by city voters in 2008.

Advocates for the synthetic fields — most notably the City Fields Foundation, the main proponent of converting grass to turf in city parks (see “Turf wars,” 10/13/09) — say that this project will only take up a fraction of the natural space in the park, and that turf has many benefits over natural parkland.

“You can put a grass field in, but then you have to limit public access,” said Patrick Hannan, communications director for the City Fields Foundation. “If you want to have grass, there’s only so much sports play that can happen.”

Hannan says that this project is a response to the high demand for usable athletic fields and the limited play provisions of grass fields and availability of usable fields also limits the number of adults and children able to play sports.

RPD spokesperson Connie Chan was not responsive to Guardian questions about the project’s consistency with the Master Plan, and on the main project, she referred to a statement on the RPD website: “We are proposing to renovate the dilapidated Beach Chalet Athletic Fields in the western end of Golden Gate Park with synthetic turf, field lights and other amenities because Beach Chalet is one of three primary ground sports fields in San Francisco but unfortunately, these fields are in abysmal condition, often closed, and lacking spectator seating.”

But activists say the RPD shouldn’t disregard its own planning documents. “It took a long time to draft the Master Plan,” said Shawna McGrew, an activist who worked at RPD for 30 years. “They have no legal obligation, but a moral obligation to uphold the Master Plan.”

The grass soccer fields have been run down due to lack of maintenance and a continuing gopher problem. But environmental advocates argue that installing the planned light fixtures and synthetic turf will interfere with the wildlife, particularly the nesting birds.

“It’s been referred to as the mothership landing,” said Nature Trip tour guide and bird watcher Eddie Bartley, discussing the impact of the proposed lighting fixtures.

Environmentalists are seeking a greener alternative to this project.

“We feel that there’s a compromise alternative that should really satisfy the concerns that everyone has,” said Katherine Howard of the Ocean Edge Steering Committee. She said her group’s goal is “to renovate the athletic fields, but to do it with real grass. They need a good drainage system, a state of the art irrigation system, gopher control barriers, and top notch grass.”

Howard has spent a significant amount of time approaching people at Golden Gate Park to inform them of the upcoming plans. She believes that not enough park users have been notified about the proposal to install the synthetic turf.

“I had no idea that they were going to do that,” native San Francisco resident Rick Rivero said in response to Howard’s description of the plans. “I played soccer in this field myself and I don’t want to see them changed.”

Rivero said that he hadn’t seen any flyers around the park mentioning plans to change the soccer fields.

RPD originally tried to do the project with conducting an EIR to study alternatives and environmental impacts, but groups like the Golden Gate Audubon Society and Ocean Edge objected. The resulting DEIR stated that, after a few alterations and formal recommendations, the project will have a “less than significant impact” on the biological resources of the area. But environmentalists are dissatisfied with the report.

Among their objections was the report labeling some trees as “tall shrubs” in order to allow for their removal. Studies cited in the DEIR state that water toxicity from the runoff of synthetic turf fields — which can contains plastic and other waste products — “decreased over time” and should have no effect on those using them.

But there have been conflicting studies of that issue, the subject of controversy through the country. Environmentalists noted that water used in natural fields filters down into the underground aquifer where it can be reused, whereas runoff from the turf will be need to be treated as wastewater, a fact given short shrift in the DEIR.

“In our opinion, the EIR is inadequate and incomplete,” Howard said. “And we will be submitting letters to that effect before Dec. 12th, as well as testifying to that on Dec. 1st.”

But the DEIR doesn’t wholly endorse the project. For example, it also states that the project’s impact on cultural resources, referring to the original intent of Golden Gate Park, will be “significant and unavoidable.”

Some parents and sports enthusiasts are disappointed with this backlash and argue that the turf fields will provide an important asset to the city.

“I’m 60, but a few decades ago I played soccer on the Beach Chalet Fields. They were in crappy condition [then] and they’re still in crappy condition,” said Tim Colen, a “soccer parent” we were referred to by Hannan. Colen is also executive director of the San Francisco Housing Action Coalition and someone who regularly testifies at City Hall in favor of large development projects.

“It surprises me that a small minority of people has been able to obstruct this project,” Colen said, noting that many parents support the project because the shortage of fields is forcing families out of the city and toward the readily available fields in the suburbs.

Community meetings and even mayoral forums have addressed the proposed Beach Chalet fields. As reported by the RichmondSF blog, mayoral candidate Joanna Rees showed up to a debate wearing her daughter’s soccer jersey and voiced opposition to the artificial turf. Board of Supervisors President David Chiu also reminisced about the joy of playing soccer on grass fields.

Other community meetings have been flooded with youth soccer players from San Francisco and beyond advocating the installation of the turf fields. But local environmentalists say Golden Gate Park was meant to be a refuge for all city residents and visitors.

“Golden Gate Park was created as a place for people to get away from the city,” Howard said. “The amount of contiguous park land is very important.”