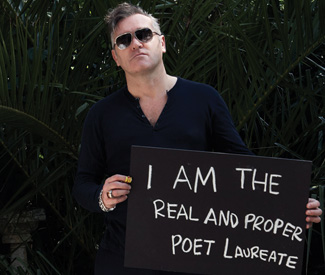 MUSIC There are certain people in your life that you will always forgive. No matter how noxious or unreasonable their actions, you’ll always find the silver lining, like a delusional Sam Spade. They could be responsible for defiling a gaggle of farm animals, and you’d convince yourself that the roosters were asking for it.

Generally, you are either bonded to these people by blood or have been friends with them for years. However, if you are tragic enough, sometimes this extends to people that you have never met. These are not symbiotic relationships. They don’t care about you, but for whatever reason, you care enough about them to defend them to the death. It’s called being a fanatic.

In April of 2009, I made an absurd decision. When roughly 60% of your monthly income goes into paying for your crappy apartment, spending $100 dollars on a concert ticket — ANY concert ticket — is an impossibility. If Jesus Christ and Alexander the Great were in town performing In The Aeroplane Over the Sea in its entirety for a hundred bones, I’d probably settle for watching the clips on YouTube. But this was different. The Moz was in town, and I had to go. Even if it meant eating nothing but ramen for the next 47 days, I had to go see him.

Those who had tickets to that Oakland show know what happened next. The day before the gig, Morrissey canceled, claiming that he had returned to England because he had been “sickened” at the smell of barbecue at his recent Coachella performance. As absurd as that excuse was, it turns out that it wasn’t even true. He was photographed hanging out at the DNA Lounge the night of the scheduled gig. Reports later surfaced that he really bagged the show because the Fox Theater wasn’t close to sold out. Maybe it was because tickets were 100 FUCKING DOLLARS a pop. I don’t know. I’m not a concert promoter.

As angry as I should have been about this, I wasn’t. In fact, I kind of understood. This is Morrissey. As he’s said a million times over, he’s not sorry. And, you know what? He shouldn’t be. How dare the brutes at Coachella infect his air with the smell of murder? How dare the unwashed masses criticize where the great Mozilla spends his evenings? He will play for us when he’s damn well ready.

And ready he is (we hope). And like a battered wife, here I am again, prepared to make the exact same absurd decision. Maybe he’ll break my heart again, but I’m willing to take that risk just to see the frontperson from my favorite ever band roll through a couple of his old classics (even if it’s just a couple). Why? It’s because I am a fanatic. And I’m not sorry either.