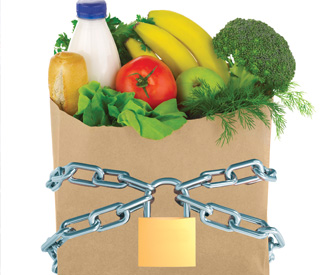 Here’s something to chew on with your bagel and coffee—assuming you can afford that in these trying times. Roughly, 2.3 million Californians are receiving official help getting enough to eat, but nearly 3 million others who qualify are not.

In fact, California’s low enrollment in the federal food stamp program, known officially as the Supplemental Nutrition Assistance Program or in California, CalFresh, is costing the state both socially and economically.

In California, though, just about 43 percent of those eligible take part.

Socially, this means, of course, that millions of people are not getting enough to eat, leading to a range of other issues including health problems and hungry children underperforming at school. (In California, about 17 percent of children live in poverty, including roughly 3 million who qualify for free or reduced price meals.)

Economically, low participation in CalFresh also leaves money on the table at time when businesses and California’s tax bureau are badly in need of funds. While the money per day may seem small, $4.50 for individual or about the cost of that bagel and coffee, it can still go a long way. Weekly CalFresh assistance equals $31 for an individual, or $325 monthly for a family of four.

“Food stamps stimulate the economy in a variety of ways,” explained Chris Wimer, associate director of the Stanford Center for the Study of Poverty and Inequality.

For instance, the U.S. Department of Agriculture—the federal administrator of the food stamp program—has found that every $5 spent from food stamps generates about $9 in related economic activity.

Additionally, CFPA has found that boosting California’s food stamp participation to the 75 percent level would generate about $131 million in sales tax revenue, including $27 million for non-general fund expenses.

But instead, low enrollment means California’s loses out on about $5 billion annually or nearly $9 billion in related economic activity. On the county level, this includes losses as well. Los Angeles County is estimated to lose out on $1.3 billion in direct assistance and $2.4 billion in related activity; Alameda County, $106 million and $191 million; San Diego County, $354 million and $634 million.

At the same time, the level of need continues to increase due to a stalled economy and flat wages.

“Overall wages have dramatically declined, particularly in the services industries such as hotel workers,” Sharp said from CFPA’s Los Angeles office, noting that falling incomes have made Cal Fresh an increasingly common supplement to family’s budgets.

In addition, the type of person in need of help has also shifted, and can include college students, those with jobs but not making enough to get by, and senior citizens.

“The variety of households taking part has increased astronomically,” Sharp said. “This includes families that have never struggled with unemployment before and it has had a staggering effect on them.”

Elizabeth Kneebone, a senior research associate at the Brookings Institution, also said the changing face of poverty now increasingly includes the suburbs as well as inner-city neighborhoods. In California, inland cities such as Riverside and Fresno have seen rapid spikes in suburban poverty, she said, sometimes double the levels in urban areas. (In a report published this month, Kneebone also determined that Fresno ranked fifth nationally for neighborhoods with extreme poverty.)

Despite this grim news, California is making some strides towards helping those in need.

In October, for example, Gov. Jerry Brown signed into law several bills that eliminated obstacles to CalFresh enrollment. Assembly Bill 6, for example, ended California’s unusual requirement that mandated that everyone 18 and over in a household receiving CalFresh be finger printed. New laws have also ended a rule requiring CalFresh participants to file quarterly reports. Instead, California will switch to simplified semi-annual, or roughly twice a year reporting, beginning in 2013.

But there are still challenges and threats ahead.

“The recession has erased a lot of the social gains made during the 1990s, so it will take a number of years to make that up,” said Caroline Danielson of the Public Policy Institute of California in Oakland. She also points to a need for smarter policies such as placing jobs closer to communities and public transit.

There is also concern that the current deficit reduction talks at the federal level could also add to the burden on households, increasing their need for supplemental help.

“The [deficit reduction talks] could reduce support for low-income families,” Stanford’s Wimer said. While the food stamp program may not be target, he added, related services such as a women and child component known as WIC could be on the chopping block.

“We’ll have to see how it plays out,” added CFPA’s Sharp. “But right now there is extreme pressure on households and they are struggling to find adequate resources. It is certainly not unreasonable to try to close that 50 percent [CalFresh] gap.”

This story was funded by a grant from the Sierra Health Foundation to do independent reporting on the topic of food access in California.