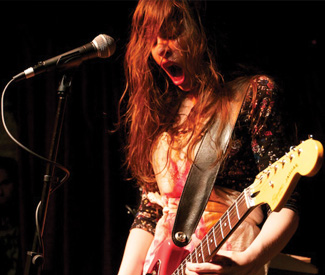 MUSIC Mexican garage punk act Le Butcherettes has been making a clamorous bang touring ’round the world — that noise thanks in no small part to wild ringleader, Teri Gender Bender. Back in early fall, Bender was expertly matched to fellow wild child, Iggy Pop, in a tour that seemed destined to rule. Tragedy struck when Pop was injured during a live show, and the future of the tour was unclear. Fast-forward three months and the rescheduled shows are finally here, going down at the Warfield. Before the tour, I spoke with the enigmatic Bender — a feminist, a performance artist, and most importantly, a rock’n’roll force to be reckoned with.

SFBG What was the reaction when you heard you’d be opening for Iggy Pop?

Teri Gender Bender All three of us absolutely fell apart with joy. It’s a dream come true for sure, still pinching myself that it can’t be real.

SFBG Any particularly memorable moments from the tours with Dead Weather, Yeah Yeah Yeahs, or Deftones?

TGB Getting to play in Mexico very early on in this band with Yeah Yeah Yeahs and Dead Weather were such mind blowing experiences. I was only 19 and they were our first big shows. It was a great [yet] nerve racking experience and a real eye opener. We did the Deftones tour with our new lineup, Gabe Serbian who is now the drummer, and Jonathan Hischke who plays bass — I did not have a bass player in the early days of the band. We had a lot of good times and weird times — it’s always strange to play first in front of people who really are there to see the headline band so it’s very hard work to get them to open their ears and minds to a band they have no idea about.

We had a lot of fun also with the Dillinger Escape Plan who were also on the tour. Both Gabe and Jonathan were friends with all of them from their days in their old bands the Locust and Flying Luttenbachers, they all had toured together before. It was also a great honor when Chino invited me to sing with him during their song “Knife Party” each night during the Deftones set. Overall we just feel really fortunate to be able to play with and for all kinds of people, not just one genre.

SFBG How did Serbian end up joining the band?

TGB Gabe joined in December of 2010, I met him through my manager Cathy who has known him for a while and suggested that I try jamming with him. We clicked immediately and that was that. She also introduced me to Jonathan, who lives at her house and was also friends with Gabe, he had just finished his touring with Broken Bells and said he would love to jam with us and again it just felt great. Our first real shows as the band we are were this year’s SXSW, which we all had a blast playing.

SFBG What music did you grow up listening to?

TGB I am not too proud to say I was all about Spice Girls, when I was really You Go Girl power. But I grew up with the music of my father who was all about classic rock and bands like the Beatles played constantly in our house when I was young. However, I will say that definitely the Spice Girls were not Gabe and Jon’s first CDs.

SFBG What inspires your lyrics?

SFBG Does the live show still include food, blood, and/or animals?

TGB The live show does not have any of those things now, when I first started the band I used many things like blood and meat as metaphors and symbolism — the meat represented how I felt women were treated, but I grew to realize that people don’t see or necessarily understand that was the message meant by the blood and meat but instead took away a whole different meaning and it became bigger than the music and more the talking point of our show from media — it was not meant as some kind of gimmick, so as soon as [I] felt like that was what it was becoming, I stopped because that was not ever the intention.

It came from a place of rage and I channeled those emotions into the music now versus having anything that could be called antics. The only thing left from that period is my bloody apron which really is the notion of the housewife stereotype rebellion. That will go away soon now too as it is also becoming a focus that does not really have the same importance or message once it is co-opted into an icon of the band.