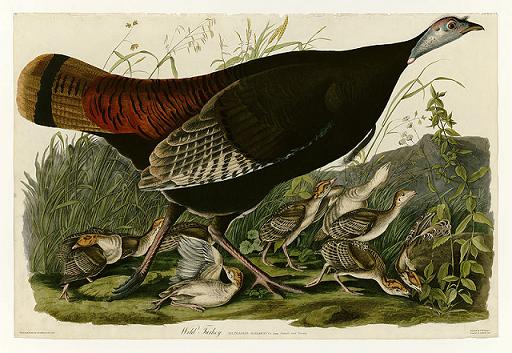 “The wild turkey…is a finer representative of America than the eagle,” boldly stated the Chronicle in a 1909 five-paragraph ode to the noble fowl. Maybe for the rest of the country, but not for California, where wild turkeys were introduced from – get this – Mexico in 1877.

So is it really our bird if it’s not native to the state? An ex-judge in Illinois had a lot to say on the matter.

John Dean Caton, who penned such classics as The Origin of a Small Race of Turkeys actually sent live young turkeys to California, turkeys he had raised himself from eggs found in his rural Illinois backyard.

It was an enterprise that now seems part scientific, part recreational, and part gastronomical. These were not truly wild turkeys. They, and the turkeys from Mexico, were carefully cared for and bred before being released into the wilds of California, all with one purpose in mind: to be hunted by lovers of white and dark meat.

Caton was a character. He described turkey farmers as “not writing men, though frequently good observers.” He compulsively checked in on the state of his Illinoisan turkey brood, sequestered on Santa Clara Island under the care of a similarly-obsessed acquaintance. Reports came back: they were inbred, severely underdeveloped, and kept dying. Not exactly the best hunting challenge, or the finest looking trophies after the fact.

The Department of Fish and Game got on board the turkey train in 1908, transplanting more Mexican specimens throughout California and keeping a breeding pool big enough to produce a thousand birds in a five-year period.

But the fowl just wouldn’t take flight here in the Golden State. The California hybrid turkey – a mix of Mexican and Eastern U.S. stock – wasn’t wild enough. Placed anywhere outside of the farm that it was raised on, it couldn’t survive, however feral its genes.

So where were all the tough turkeys? The rough-and-tumble birds used to evading gun-toting hunters? Perhaps a little obviously, they were in Texas. Most of California’s wild turkeys today descend from a Rio Grande variety first imported in 1959.

Chances are the turkey you feast upon on Thursday won’t be a wild one (or even free of a chicken-stuffed duck in its gullet). But on a day where gorging is de rigueur, remember that the sacred Butterball has a wild cousin lurking out there, one that deserves at least a toast for keeping it real.