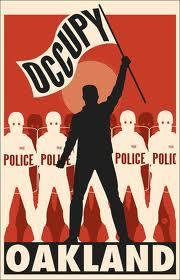 As cities across America evict encampments of the Occupy Wall Street movement, similarities of timing, talking points and tactics among major metropolitan mayors and police chiefs have led critics to wonder: Is some sort of national coordination going on?

The White House says there’s no federal oversight. Speaking November 15 aboard Air Force One, White House Press Secretary Jay Carney said “The president’s position is that obviously every municipality has to make its own decisions about how to handle these issues.”

But a little-known but influential private membership based organization has placed itself at the center of advising and coordinating the crackdown on the encampments. The Police Executive Research Forum, an international non-governmental organization with ties to law enforcement and the U.S. Department of Homeland Security, has been coordinating conference calls with major metropolitan mayors and police chiefs to advise them on policing matters and discuss response to the Occupy movement. The group has distributed a recently published guide on policing political events.

The coordination of political crackdowns on the Occupy movement has been conducted behind closed doors, with city officials and PERF refusing to say how many cities participated in the conference calls and the exact nature of the discussions. Reports of at least a dozen cities and some indication of as many as 40 accepting PERF advice and/or strategic documents include San Francisco, Seattle, New York, Portland, Oakland, Atlanta, and Washington DC.

The San Francisco Police Department and Mayor Ed Lee’s office did not returned the Guardian’s request for comment about the PERF calls by press time. However, Oakland interim Police Chief Howard Jordan was quoted by the Associated Press confirming Oakland and San Francisco police involvement in the strategy sessions.

PERF coordinated a November 10 conference call with city police chiefs across the country – and many of these cities undertook crackdowns shortly afterward.

“We know that there were influential conference calls of private groups that include police chiefs who played key roles in repressing the anti-globalization movement, in order to stage rolling attacks on occupations across the country,” said Baruca Peller, an organizer for Occupy Oakland. “In less than a week an unprecedented number of protesters have been brutalized and arrested, and in many cities such as Oakland these evictions were pushed for by the local one-percent.”

According to PERF’s website, general membership in the group is exclusive to “the executive head of a municipal, county or state-funded agency that provides general police services. The agency must have at least 100 full-time employees, or serve a population of 50,000 or more people.”

PERF’s current and former directors read as a who’s who of police chiefs involved in crackdowns on anti-globalization and political convention protesters resulting in thousands of arrests, hundreds of injuries, and millions of dollars paid out in police brutality and wrongful arrest lawsuits.

These current and former U.S. police chiefs — along with top ranking police union officials and representatives from Canadian and British police — have been marketing to municipal police forces and politicians their joint experiences as specialists on policing mass demonstrations.

Chairing PERF’s board of directors is Philadelphia Police Commissioner and former Washington D.C. Metro Police Chief Charles Ramsey, who was responsible for coordinating the police response to protests against international banking institutions including the World Bank and International Monetary Fund. Those protests, and Ramsey’s response to massive anti-war demonstrations in Washington DC in the lead up the the Iraq War, often resulted in preemptive mass arrest of participants that were later deemed to be unconstitutional.

Ramsey’s predecessor as organization chair is former Philadelphia Police Commissioner and former Miami Police Chief  John Timoney, who is responsible for the so called “Miami Model,” coined after the police crackdown on the 2003 Free Trade Agreement of the Americas protest.
The police response to protesters in Miami lead to hundreds of injuries to protesters. The ACLU won multiple suits against the Miami P.D. over abuse to protesters and free speech concerns.

Prior to the 2003 protest, Timoney was quoted as saying that the FTAA was “the first big event for homeland security … the first real realistic run-through to see how it would work.”

Timoney arrived in Miami with plenty of baggage. At the 2000 Republican National Convention, Timoney coordinated a crackdown that resulted in more than 420 arrests with only 13 convictions, none of which resulted in jail time. As in Miami, there was well documented abuse of some of the people arrested.

Also among PERF’s directors is Minneapolis police chief Tim Dolan, who was responsible for the crackdown on protesters at the 2008 Republican National Convention. That event also resulted in lawsuits, protester injuries and an outcry from the national press about police brutality and the preemptive nature of the police action.

PERF is more than a mere policy group. Wexler has personally represented PERF at major political events, in face-to-face dialog with police tactical commanders and leadership. That was the case at the 2008 Republican National Convention, where Wexler and Minneapolis Police Chief Dolan coordinated what is widely regarded as one of the most aggressive political crackdowns in recent American history.

Wexler spent the afternoon of October 14 observing Occupy Philadelphia with Philadelphia police commissioner Ramsey.
Speaking to the Philadelphia Tribune, Ramsey said: “They wanted to see what the Occupy protesters were doing here in Philadelphia. As we walked through their encampment, almost immediately they were texting other groups around the country – it was happening while we were there and that was very, very interesting. It’s instant communication, and it’s worldwide. We have to become more adept at using the technology. Our police department has its own active Facebook page as a way of reaching out to the community.”

“Had a great one-day conference in Philly about social media – very pertinent these days with the occupy protests …” Wexler stated from his twitter account.

As the occupation movement grew, PERF began circulating a publication titled Managing Major Events: Best Practices from the Field. The manual – a copy of which we downloaded — amounts to a how-to guide for policing political events, and gives special attention to policing “Anarchists” and “Eco Terrrorists” at political events.

The guide encourages the use of undercover officers and snatch squads to “grab the bad guys and remove them from the crowd.” It urges local law enforcement to use social media to map the Occupy movement.

An earlier PERF guide Police Management of Mass Demonstrations advocates the use of embedded media to control police messages, the use of undercover cops to infiltrate protest groups, the use and pitfalls of preemptive mass arrest, an examination of the use of less-than-lethal crowd control weapons, and general discussion weighing the use of force in crowd control.