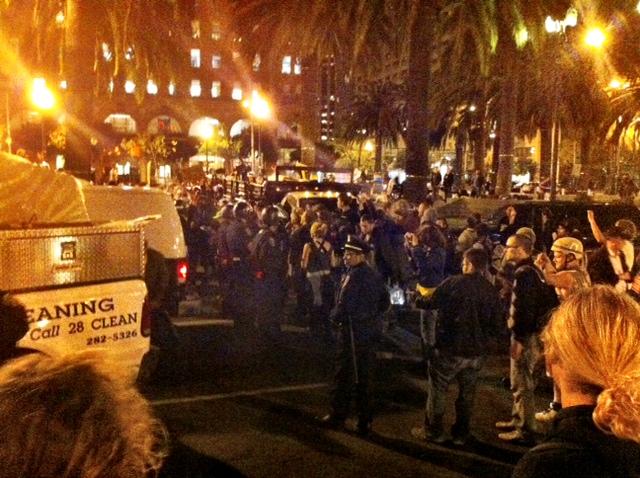 The OccupySF camp is filthy. There’s violence, drugs and disease. Half the protesters are just drunken thugs who are there to party and make a mess. It’s a public-health hazard. Jeez, it looks like the message is lost and the place has to go.

That’s what the Chron and the Ex are saying — and it’s a perfect setup, a ready-made public excuse for Mayor Ed Lee to send the cops in with riot gear and an eviction notice. It could happen tonight, or tomorrow night.

Frankly, Lee needs the bad (for Occupy) press. The movement’s goals are popular in this city, and when he came very close to evicting the campers, with cops running around the city in buses, his popularity dropped. He saw what happened to Jean Quan in Oakland; her tear-gas assault on Occupy Oakland may have been the end of her political career.

But hey, it’s different now: The daily papers are proclaiming that the encampment isn’t about economic inequality any more. It’s devolved into an unruly mob that can’t be tolerated. Who can blame Lee for cleaning it up?

That also happens to be an utterly unfair characterization of what’s going on. Sure, there are homeless people in the camp, and yes, some of them have mental health issues. But OccupySF is talking about the 99 percent, some of whom have suffered greatly in this economy — and it’s no surprise that some of them part of the occupation. Yes, it’s a challenge, but it something that OccupySF is taking on. Oh, and by the way — the homeless people and people with mental health issues (that sometimes lead to violence) will still be on the streets of San Francisco is they evict the Occupy encampment. But they’ll be worse off than they are today.

Yael Chanoff just filed her report on what’s really going on at OccupySF:

At last night’s General Assembly, OccupySF organizer Philip Oje debriefed on that days meeting with Mayor Ed Lee, and participants in the 150-person meeting debated the best next steps. Several different viewpoints were discussed. Many were indignant about reorganizing camp to appease the city, saying that “I didn’t come her to comply with city ordinances that change every day. I came here to do what I think is right.”
Others believed believed that the camp should do everything possible to comply with the city in order to hopefully avoid a raid (and maintain credibility if one does occur.) It was generally acknowledged that the situation was a Catch-22: The camp could not comply with requirements such as maintaining four feet of space between tents without expanding past Justin Herman Plaza, but the city refused to allow any expansion to stand until their requirements were met. In general, those assembled agreed that regardless of the city’s difficult to follow guidelines, a clean-up would benefit the health and well-being of campers, and got to work.

This comes after a hard week of dealing with the frustrating realities of human interaction in a cramped space. The encampment has grown steadily since its start, and in recent weeks has been home to upwards of 300 people on a regular basis. Many campers would agree that in the past two weeks that tensions have built as high as they did. When Examiner Reporter Mike Aldax spent 24 hours at camp, it was during the peak of conflict.

Indeed, many at OccupySF are frustrated. There is a general feeling that there is not enough time in the day to maintain a safe and caring community that does not exclude anyone as well as progress with the political agenda that the movement stands for. However, there is also a basic agreement that those with addiction, mental illness, and other causes of suffering are affected directly by an unjust society in which a small percentage hoards vast majority of wealth while the masses struggle to afford food, shelter, health care and education; to attempt to exclude those who are in desperate situations, the most in need of emergency action to change our system and our lives, would be morally intolerable hypocrisy.

As famed radical environmentalist Derrick Jensen put it when he came to speak at the encampment November 12, “At the same time you’re building a resistance movement, you’re being put in the position of dealing with the needs of those who have been dispossessed and damaged by the system.”

It’s true: according to Connie Ford, a member of OPEIU Local 3 which represents many on the city’s Homeless Outreach Team, “The homeless come there because it’s safer than the shelters.”

This has caused difficulties in the past few weeks that the camp has been struggling to deal with. The solution is starting to come together. After physical fights began to become a major problem last week, the camp stepped up the process of enacting a culture of community policing. The night of November 15, when “Instigator Jimmy” was involved in an altercation during a general assembly, about 50 formed a mass between him and camp and slowly pushed him off the site, chanting “Whose park? Our park.” As one camper put it, “Jimmy’s individual will was extinguished by our collective will.” This is an experiment in radically non-violent coercion.

Since then, this tactic has been employed to greater and greater success. Last night, when one camper began to instigate conflict, it only took 10 or so others to cause him to leave in the same way, and hardly disrupted the peaceful mood at the site.

In addition, despite starting out completely unequipped to provide medical and mental health to the masses for free, OccupySF has set up a medical tent run by nurses from the National Nurses Association and several “emotional assistance” spaces, one of which has been facilitated by the Icarus Project and other groups with alternative approaches to mental health. According to an OccupySF press release today:
“Forty clergy, including bishops, have recently formed as ‘San Francisco Interfaith Allies of Occupy’ because we share the concerns of the ninety-nine percent,” said Rev. Carol Been of CLUE California, “and they have asked us for help because they were not prepared to handle homelessness, mental illness, people attracted for unseemly reasons not associated with the occupation. Resources have recently begun to be put into place.”

It seems that all of this grappling with difficult issues and hard work on the part of OccupySF has begun to pay off. Last night after General Assembly, campers worked to clear off the Bacci Ball courts as per the city’s request, take down tarps, and space out tents to the extent that they could without expanding past Justin Herman Plaza (renamed by some Bradley Manning Plaza.) Camp was clean and vastly quieter than it had been in previous days.

Around midnight, there were about 30 people awake, talking and playing mellow drums on the outskirts of camp while hundreds more slept in the approximately 180 tents. One man who had been sleeping there three weeks said, “There’s a new energy. After we cleaned, a lot of the riff-raff left.” With a grin he added “It looks like there’s still some, but they’ve been over there having some kind of profound conversation all night,” gesturing to the camp east side.

I pitched my tent about 10 feet from the “profound conversation” and drifted off easily, though I admittedly prefer a nice buzz of humanity while I sleep. I was, however, woken up around 6:00, when others began waking up and excitedly discussing the fact that the camp had made it through the night without a police raid.

It remains to be seen if the same will be said for tonight.