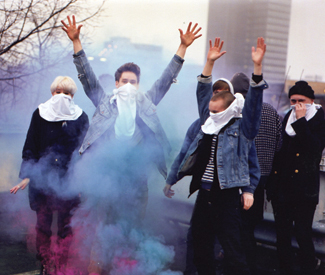 MUSIC A somber organ chord rings out on the opening track of WU LYF’s Go Tell Fire To The Mountain, “L Y F.” As the distant clash of cymbals grows louder, a wailing guitar lures you in like a siren song. Then Ellery Roberts unleashes a desperate, hellish growl, and you realize that WU LYF is unlike any band you’ve ever heard.

Characterized by Roberts’ guttural snarl and a rich, grandiose sound the band refers to as heavy pop, Go Tell Fire To The Mountain is a cathartic masterpiece born from the restless adolescence of four young Mancunians. WU LYF (an acronym for World Unite! Lucifer Youth Foundation) came together through a firm resistance to a conventional transition into adulthood.

“I didn’t want to go to university,” says Roberts. “I felt like it was kind of the only option I had.” On the phone, Roberts is a far cry from the gravel-throated animal on WU LYF’s debut. The 20-year-old is thoughtful, reserved, and exudes a remarkable intelligence.

Roberts and bandmates Tom McClung, Joe Manning, and Evans Kati were in their mid teens when they began playing together in their native Manchester, England. “When we wrote [the single] ‘Heavy Pop,’ that was the moment,” Roberts says. “It didn’t feel like we were trying to sound like anyone else.”

Sure, Roberts’ vocals easily draw comparisons to Tom Waits, and the band’s epic sound is reminiscent of Godspeed You! Black Emperor or Explosions In The Sky. In an era of rampant imitation and recycling, however, WU LYF has stumbled upon a sound that’s refreshingly unusual.

Expecting “Heavy Pop” to reach only a handful of friends, the group posted the track online. Media outlets caught hold of the song and began speculating wildly about the mystery band from Manchester. Rather than sign a record deal, WU LYF set up a website with vague, anti-authoritarian musings where fans could join the Lucifer Youth Foundation. For a small entry fee, members received the band’s single and a white “bandit flag of allegiance.” This worldwide alignment of hoodlums funded WU LYF’s full length debut.

If “Heavy Pop” marked the genesis of WU LYF, the abandoned church where Go Tell Fire To The Mountain was recorded is the mother that nurtured the beast. The group abstained from working in a studio, which Roberts says “seemed like a mathematic way of making music.” Instead, the foursome went out in search of big, empty spaces.

“We were walking around this old, industrial part and we just came across this church in the middle of a maze of factories,” he says. “It added so much to the record. None of us were really controlling the sound.”

Though Roberts’ impassioned vocals render his words nearly incomprehensible, a quick look at his lyrics reveals a literary astuteness. Go Tell Fire To The Mountain‘s narrative structure was inspired by a screenplay Roberts wrote at the age of 17, and the cinematic album explores themes of camaraderie, mortality, and ambiguous religion.

“We put a lot of ourselves into it,” says Roberts. Although the record’s only been out for a few months, WU LYF has achieved a cult like following that Roberts calls “pretty amazing, but strange.” In the wake of the monstrous reaction to Go Tell Fire To The Mountain, WU LYF is embarking on its most extensive tour thus far.

The band’s been in the US for a few days when we speak so I ask Roberts if he’s spotted any LYF members in the audience. “We’ve seen a couple,” he responds. “It’s always nice to see when you come on stage, [the] fans that have their white flags. You know you’ve got your friends out there.”