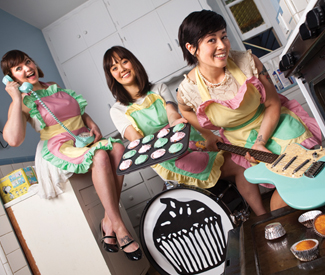 GOLDIES It was the summery music video that launched a thousand bubblegum crushes. Guitarist-vocalist Lauren Matsui, drummer Laura Gravander, and bassist Sola Morrissey, a.k.a the Dirty Cupcakes, adorably lust after unrequited love. The cute boy of their dreams prefers other boys, and he sexily smooches another man, while the girls swoon from different spots around San Francisco, including a Sandy-in-Grease bedroom scene. “I feel like it’s a San Francisco thing to be in love with a gay man, or somebody that you can’t have,” says Matsui.

The addictive video, created by their pals Jen Dorn, Kevin Jardin, and Aya Carpio for the band’s garage pop jam “I Want It (Your Love),” was an insta-hit this summer, gaining the relatively unknown trio more than 15,000 page views to date.

It was a rough cut of the video that convinced Matthew Melton of Bare Wires to put out the trio’s record as the first release on his new label, Fuzz City. Just released last month, the I Want It seven-inch was recorded in Melton’s bedroom in Oakland and a studio in the Tenderloin beginning late 2009. The Cupcakes were born just a year prior.

It almost began on a lark. On a sunny day in Dolores Park in 2008, some strippers were holding a bake sale, and a friend of Matsui and Morrissey’s brought back a treat. Hence the name, Dirty Cupcakes. “We didn’t even have a band, but we had the name,” Matsui laughs. Matsui, who had been playing guitar since she was 13 (thanks to A Hard Day’s Night), taught Morrissey to play the bass and they picked up Gravander shortly there after.

Gravander was playing with Nobunny at the now-shuttered Eagle Tavern when Matsui gathered some “liquid courage” and asked Gravander to join her band: “She was so awesome and totally had the energy we needed.”

The band, influenced by stripped-down bubblegum punk like Nikki and the Corvettes and early Go-Go’s, has since played throughout the Bay, most often at the Knockout (“we’re basically the resident band,” Matsui jokes) and house shows in the East Bay — Nov. 9, they’ll play Oakland’s New Parish for the first time.

Live, they play fast and loud, wearing matching costumes — colorful ’60s-esque stripey shifts, Girl Scout uniforms, dinosaur heads. At one Oakland house show, Gravander recalls things getting particularly hectic. “During the last half of our last song, the drums collapsed and I was like, ‘No! I won’t end like this!’ So I pulled the snare and held it on my lap and kept playing.”

It’s the band’s cheerful take on punk that has endeared them to locals and other bands like Shannon and the Clams. They make fun songs (including one about robot love) and videos, wear creative frocks, and say they feel the freedom to do whatever they want as band — I guess, save for making out with gay boys.