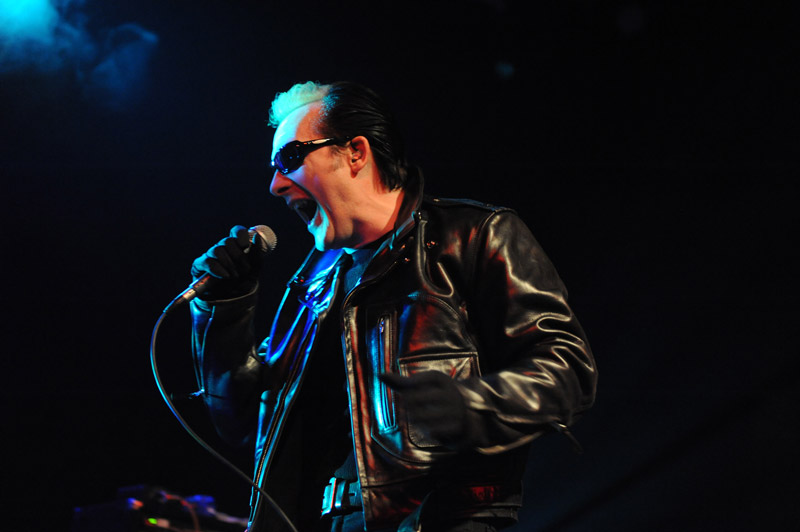 The Damned first turned heads back in 1976. On Saturday night, the UK punk band took to the stage at Slim’s as part of its 35th Anniversary Tour and proved it’s only grown better with time.

Led by founding members Dave Vanian and Captain Sensible, the current lineup of the group ripped through a set of two complete albums from start to finish; its debut LP, Damned Damned Damned, and its fourth release, The Black Album.

When he first walked out on stage and strapped on his guitar, Captain Sensible greeted the audience and thanked them for coming to the special anniversary show, saying with a smirk, “We’re going to play a couple of records that some people consider classics — I guess I can’t really comment on that.”

The band then launched into the first salvo of the opening bass notes of “Neat Neat Neat,” on to “New Rose,” “Drinking About My Baby,” “Hit Or Miss” and more, charging through the material, with the sold-out crowd singing along with Vanian’s goth punk-meets-rockabilly crooner vocals, and pulsing to the jackhammer rhythm section of drummer Pinch and bassist Stu Miller. Keyboardist Monty Oxy Moron presided over the proceedings like some sort of mad conductor or possessed version of Beethoven, his hands flailing wildly about when not pounding the keys.

After completing the two albums in their entirety, the group came back out for a short encore of other fan favorites, including “Jet Boy, Jet Girl,” (with Vanian encouraging the crowd to help him with the tune’s signature “woo-ooh-ooh-ooh!” chorus) and ending with the appropriately titled “Smash It Up.” Once again, the Damned cemented its reputation as one of the best bands to come out of the first wave of punk.