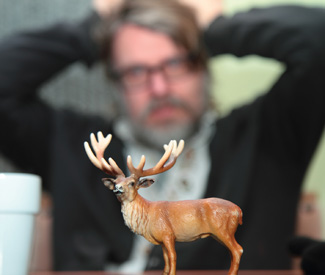 A onetime dance critic who made a mid-career leap into performance, Steijn is at 53 defiantly not young, nor especially sleek despite a close working relationship with his spirit animal, a deer. But a graceful, probing, witty, and intriguing artist he certainly is. Known to collaborate widely — most consistently with compatriot Frans Poelstra, with whom he forms United Sorry — he’s also the creator of a handful of idiosyncratic solo works, one of which he performs Thursday night at the new Joe Goode Performance Annex in the Mission.

“I am reborn a smoker/Allowing myself to get high in the clouds of imagination” is billed as “a performance in the form of a lecture/demonstration,” but that’s a misleadingly dry description for a euphoric foray into the “invisible” places Steijn — who counts among his influences Jack Smith, Korean shaman-performer Hi-Ah Park, and ayahuasca rituals — has long pursued with a playful earnestness.

“Every time I do it, it changes a little bit,” Steijn says of the piece. “In a way, it’s my introduction about what I can do onstage, but it’s also a kind of showcase of how we use imagination. It’s really about belief systems.”

It’s also a piece where he channels a deer to communicate with the dead. “I dance a lot with a deer, and also it comes into my mind sometimes.” Of the title’s reference to a reborn smoker, Steijn explains, “I was working on shamanistic power animals, and I manifested the deer, and the deer was smoking a cigar.”

Steijn, who divides much of his time between Vienna and Amsterdam, spoke by phone last week from New York City, where he was at work on a new collaboration with choreographer Maria Hassabi (with whom he made a splash last year in an eye-locking duet at New York’s Danspace). Genial, thoughtful, self-effacing, and prone to shy laughter, Steijn remembers that as a lonely child he fantasized a guardian angel. “And it really worked,” he chuckles. It led him to consider “how you can comfort yourself with imagination; how imagination can open up a certain structure for reality.”

“I found I was interested in how the mind works,” he continues, “how we can put our self in a certain mind state, or in a way of thinking, or in a way of perceiving reality, and how that could be very truthful for theater, to show what happens when you are in this state of mind. Because I feel sometimes we’re too rational — or not even rational, but we think too much in the patterns we are used to thinking in.

William Forsythe [showed how] we can change the center of movement in the body; it can be in every body part almost, and you can [put it] also outside the body sometimes. I like to think in that way about the mind: how can you perceive or analyze reality from another center than you are used to? I felt that in shamanism it was very playful to go there, to still a little bit your logical mind. What I found is that when I imagine [myself] into a state, I look at the world with much more compassion and love. It’s a strategy to relate differently to the audience and to movement in the body, to a different imagination.”

Steijn had been in New York only a few days, but said he’d already visited Occupy Wall Street several times. Waxing enthusiastic about what he found there, he spoke of the dialogue and imagination opened up in this re-appropriated public square, and it seemed to recall much of his own work with “intensifying” a space, setting it free of the usual constraints to imagination and experience.

“You know when Joseph Boeys said everybody has to be an artist? I think it would be nice if everyone has to be a poet,” he says. “Perhaps there’s not so much difference between the two. But I like to think you meet with a situation and then you have to create how you want to deal with it, how you want to change it. It’s not to adapt yourself to a situation but really to make it your own. I think this empowerment is important.”