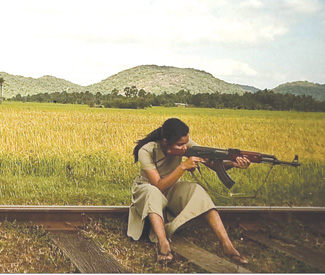 FILM It’s a sunny day in Los Angeles, and Omi Vaidya is puttering around, looking for a neighbor who’ll loan him a lawnmower. Vaidya is an actor of the “working” (as opposed to “unemployed” or “superstar”) variety, with bit parts on shows like Arrested Development and The Office dotting his resume. Finding work as an Indian American actor can be frustrating — “a lot of it is typecasting,” he notes. Computer nerds and such.

But thousands of miles away in Mumbai, Vaidya’s star is about to explode. Accompanied by a film crew comprised of pals from UC Santa Cruz, he makes the trek to India to attend the premiere of 3 Idiots — a massive movie even by Bollywood standards — in which he has a small but showy part. Big in Bollywood tracks Vaidya’s journey from unknown to chased-down-the-street famous, a process that begins happening literally halfway through the film’s very first screening. (This being Bollywood, the movie is so long there’s an intermission.) Vaidya doesn’t speak much Hindi, but neither does the buffoonish character he plays; the film’s breakout joke, on the scale of “Show me the money” or “I drink your milkshake,” hinges on his confusing the word for “miracle” with the word for “rape.” (Indian audiences find this hilarious, and Vaidya is so endearing it’s almost easy to let that ickiness go.)

Working in a totally unfamiliar environment, directors Bill Bowles and Kenny Mehan, both of whom are slated to appear in person at Big in Bollywood‘s screening at the 3rd I International South Asian Film Festival, are forced to go gonzo at times. Amazingly, fake press passes identifying them as “Hollywood Kitchen” correspondents are all it takes to get their camera onto 3 Idiots‘ red carpet, and later, backstage at a glitzy awards show, where new sensation Vaidya is both co-host and nominee.

As Vaidya enjoys his success, Bowles and Mehan capture an insider’s view of how different the Bollywood and Hollywood industries are. Massive fame, however, evokes the same reaction in any language: “It feels like a zombie movie!” Vaidya exclaims, breathless after dodging an enthusiastic hoard of fans. Despite the adulation, he remains humble — thanks in part to his supportive mother, once an aspiring actress herself, and understanding wife, a PhD student who’s due back for class in SoCal just as Omi-mania starts to overtake India. Having his buddies film his every move probably also helped keep his ego in check, though he doesn’t seem prone to diva-ish behavior anyway: soon after he goes home to L.A., Vaidya — whose imdb.com profile suggests he’s not hurting for gigs — is back tending to his lawn, apparently unruffled about his return to anonymity.

While the 3rd I festival isn’t, alas, screening 3 Idiots, you can get your Bollywood fix with Delhi Belly, which looks to be in the same song-and-dance-infused screwball vein (with a poop-joke title). In a tidy illustration of how insular the industry is, Imran Khan, nephew of 3 Idiots star Aamir Khan (producer of Delhi Belly), plays the lead.

Other fest selections worth noting include Sanjeewa Pushpakumara’s grim (if overly long and rambling) Flying Fish, one of several films from Sri Lanka in this year’s program; its multiple stories are united not by overlapping characters but by a sense of despair in a country ravaged by war. In a program of short films about gender and sexuality, The Boxing Ladies, a doc about a trio of rebellious Kolkata sisters who shock their Muslim family with their shared passion for pugilism, is a standout.