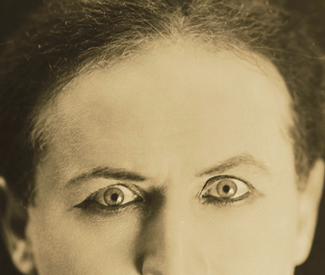 Harry Houdini: the name conjures up a multitude of images and ideas about what a magician and escape artist should be. The Contemporary Jewish Museum in San Francisco is currently celebrating that rich and long-lasting legacy with Houdini: Art and Magic, a new exhibit featuring a collection of vintage photographs, event posters, archival film, original props, art installations, and more, focusing on the world’s most famous magician — who died in 1926, on Halloween.

“The genesis for the show was just really seeing how Houdini’s relevance still remains today in popular culture, and how despite being born in 1874, he still is so visible in the culture, visible in contemporary art. His celebrity has really transcended three centuries,” says CJM curator Dara Solomon.

The exhibition was originally put together by the Jewish Museum in New York, with the CJM also getting involved early on in the process, as local organizers felt that there would be a strong interest in Houdini from the Bay Area — after all, the legendary icon had performed in San Francisco several times; he appeared at the Orpheum Theater, broke out of locked box lowered into the bay at Aquatic Park, and hung off the side of the Hearst Building to perform his famous straitjacket escape stunt.

Tracing Houdini’s life from his birth as Erich Weiss in Budapest in 1874 and following his family’s immigration to the United States, his upbringing as the son of a rabbi, and the eventual evolution of his performing talents and ascension to the world stage, the exhibit tells Houdini’s story through displays of rarely-seen personal photographs, handwritten journals, and what may be the biggest draws for fans — a trunk, milk can, straitjacket, and handcuffs that actually belonged to the magician and were used in his shows.

What visitors to the exhibit won’t see are any explanations or descriptions revealing Houdini’s secrets — something that organizers wanted to avoid.

“It would be seen as the ultimate sort of betrayal if the exhibition set out to reveal Houdini’s tricks,” says Solomon. “He worked so hard at making his body this sort of instrument to do these performances, he was in such amazing physical shape — that was what really allowed him to do these amazing feats of strength.”

Another aspect to the exhibit is the exploration of the impact of Houdini and his mystique on contemporary artists — paintings and other installations from artists such as Deborah Oropallo and Raymond Pettibon add to the survey of his legacy.

“So many artists in the past 20 or 25 years have really been taken by Houdini as inspiration and as a model for how an artist works; they find this real connection with the art of the magician and the art that they make, that they are both illusionists,” says Solomon.

For 10 years after his death, Houdini’s widow Bess conducted séances on Halloween attempting to contact and communicate with him from beyond the grave — with his ever-growing popularity, and a new fan base with each new generation, somebody, somewhere in the world will undoubtedly be trying to do the same on Monday night.

“I think that there has been nobody else like him — he was such a master of communications and a marketing genius that he ensured that he left this incredible legacy,” says Solomon. “When people think of the world of magic, he is still the one and only.”