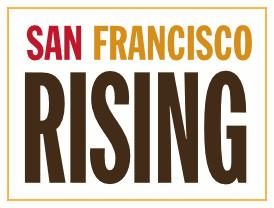 Mayor Ed Lee’s support by the wealthy power brokers and his checkered history with the Willie Brown administration has caused most progressive groups to shun him in this election, with one notable exception. San Francisco Rising Action Fund, a grassroots organization for working class people of color, gave Lee its second place endorsement, right after progressive favorite John Avalos. It’s the only slate that the two political opposites appear on together.

The San Francisco Democratic Party, Sierra Club, San Francisco Labor Council, the Bay Guardian, and other progressive groups have all issued endorsement slates that generally include Avalos, Dennis Herrera, and sometimes Leland Yee. But Lee has been almost entirely shut out on the left – except for a third place endorsement by the San Francisco Bicycle Coalition, which is generally left but mostly single issue – making SFRAF the rare exception.

Alex Tom, one of the directors of SFRAF, clarified that its endorsement “ is not about Ed, but about the larger progressive movement.” Going against the endorsement grain, he said SFRAF consolidates the Asian, Latino, and Black communities— a strategy to compensate the divided nature in the political left.

“We need to step back in general and have a conversation with how people of color engage with politics and the progressive movement,” Tom told us.

Like many liberal groups, SFRAF is at the front lines of OccupySF and supports progressive bills like the Health Care Security Ordinance, which was the subject of Lee’s first veto this week, angering progressive groups who sought to close a loophole that lets businesses raid the health savings accounts of their employees.

But Tom points out that “there is an assumption in SF that to get progressive things passed you need to go to District 5, 6, and 9— you don’t go to the Southeast,” or other lower income neighborhoods. SFRAF is trying to reframe the broad spectrum of progressives, to “civically engage [voters of color and lower incomes] and [include them] in the electorate.”

Voters of color don’t engage in the same spaces that other progressive do. “We are not insiders, we are not even inside the progressive circle,” Tom says.

SFRAF doesn’t believe the company Lee keeps makes him untrustworthy. While many progressives see a politician’s connections as good indicators of their future actions and allegiances, SFRAF doesn’t seem to place much emphasis on this. Indeed, Lee seems to be an obstacle to much of the group’s agenda.

Take the SFRAF’s 10-point platform, which is diametrically opposed to many of Lee’s recent actions. In the matters of health care, SFRAF’s promotes, “policies that require employers to provide quality, affordable healthcare coverage to their employees and their families,” something that Lee’s recent veto seemed to weaken, letting businesses take about $50 million per year that city law required them to set aside for employee health care.

The next day, Lee faced the same groups he voted against— at a labor union rally— and explained his veto was an act of diligence to protect jobs. But the sponsor of the vetoed legislation, Sup. David Campos, said the veto was an setback for workers’ rights and consumer protection. “It’s a defining issue for us at City Hall,” Campos told us.

But Tom disagrees with progressive assessments that “pay to play” is a major force in City Hall politics, although to did say it is important to “acknowledge your power structure.” To SFRAF, the progressive sector cannot duplicate a city run by a few insiders— a fear SFBG expects to be a reality with Ed Lee as mayor. Instead, he says a progressive City Hall must bring a “multi-sectored” people into the decision-making process.

And he think Lee will be an ally in doing so.