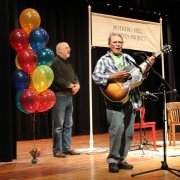 And so Country Joe McDonald ambled on to the stage Saturday night at the International Studies Academy on Potrero Hill and told an full auditorium full of history night groupies  that since he was playing in a school he would open with a spelling lesson.

“Give me an F,” he roared,  and the audience roared back with an F.

“Give me a U, give me a C, give me a K,” and the audience roared back again and again  with knowledge of the lyrics of the anti-war song “I Feel Like I’m Fixing To Die” that Country Joe made famous during the Vietnam war and has been singing as his trademark song ever since.

He would pause and the audience would continue on with the words. Country Joe was in top form, the audience loved him, and it was a stunning beginning to the 12th annual Potrero Hill History Night.  And the fact that Occupy SF and Occupy Oakland were fixing to explode sooner or later in nearby neighborhoods  only gave some timely poignancy to the occasion.

But Country Joe wasn’t at History NIght to perform as a singer or political activist. He explained that he was there as a turnaround artist to interview Joel Selvin, the veteran San Francisco Chronicle pop culture reviewer and author of “Smart Ass,” a collection of 40 years of Selvin’s music journalism. Significantly, Selvin also happens to be a longtime Potrero Hill resident. The latter phrase is the key, because the point of History Night is to focus on the rich history and colorful personalities of Potrero Hill and put them together into a lively program. In this segment, Joe the performer interviewed Joel the reviewer/reporter who had been writing about Joe for years.

The two made a splendid team and it turned out that Joel was as good onstage in this format as Country Joe. It was good fun, instructive at times, particularly with the stories about Bill Graham’s antics and angry outbursts and how each dealt with him. The audience had fun trying to figure out through questions just how rock n’ roll and Country Joe from Berkeley connected to the hill. Well, one answer was that Jann Wenner, the founder of Rolling Stone magazine, claimed three different addresses on Rhode Island Street.

The program this year was the best ever. A barbecue outside the building serviced by a platoon of History Night  groupies on a warm and wondrous Potrero Hill evening. And a program featuring a formal presentation of a chunk of goat hoofprints embedded in concrete, an interview with the woman who tended the goats decades ago, a surprise appearance by the lady who found and preserved the hoofprints for years, and a starring role by Phillip DeAndrade of Goat Hill Pizza who was given the goat hill hoofprints as a surprise gift because he once had goats in the back of his Goat Hill pizza parlor and because, well, he’s Phil DeAndrade.

DeAndrade is a Potrero Hill version of the Scarlett Pimpernel (he’s here, he’s there, he’s everywhere). For this evening, he was doing triple duty as the worthy receiver of goat hoofprints in concrete, as master of ceremonies, and as the Hot Interviewer of the Colorful Potrero Hill Veteran, the key finale of every history night event.

DeAndrade was specially eloquent in explaining the importance of history night. It is, he said, a special event (nobody else in town has one) that showcases Potrero Hill.as a special place and its people as special people who live in a special neighborhood with a special culture and a special history and such institutions as the Neighborhood House built in the 1920s  with Julia Morgan as the architect.

The goat hoofprints in cement  made his special point. The artifact dates from 1925 or so and was found and preserved by Rose Marie Ostler, a Potrero Hill native. She kept the hoofprints for years and then decided they should go to DeAndrade of Goat Hill for his historic connection with goats.  She presented them at the ceremony, with help from Dr. Frank Gilson, a local chiropractor wearing a Halloween type goat hill mask.

This year’s Potrero Hill veteran was Josephine Firpo Alioto, who was born on Potrero Hill 90 years ago, and now lives in San Jose.  She married Frank Alioto, son of Police Capt Calogero and Vincenza Alioto.  The Alioto family moved to 755 Carolina St. around 1930, just around the corner from Josephine’s house. There were no houses on the cornerin those days,  so they had a clear view of one another’s houses. Josephine and Frank were friends for 80 years and married for 65 and a half years.  They were married at nearby St. Theresa’s Church.  With expert coaching from DeAndrade, she was most articulate and provided the details of life and times of growing up on the hill in the 1920s and 1930s.

Perhaps the most “newsworthy” comment came when she took the audience by surprise when she mentioned that her cousin, Luis  Firpo, known as the Raging Bull of the Pampas in Argentina, knocked Jack Dempsey out of the ring in a  championship fight. (My google check showed she was right. Firpo did knock Dempsey out of the ring in the  famous 1923 heavyweight championship fight at the Polo Grounds in New York City and Dempsey’s head hit a reporter’s typewriter. But Dempsey got back in the ring on a contested long count and won the fight in the third round in what many think is the greatest fight of all time. It was Dempsey’s last successful defense of his title. The fight is on UTube and googleable under Firpo.)

As is the history night custom, there were lots of Firpos and Aliotos in the audience to help fill in Josephine Alioto’s story and answer questions from the audience and provide the evidence of a very special neighborhood.

All in all, it was a most memorable event and all to the credit of Peter Linenthal, the founder and impresario of Potrero Hill History Night. His event even got a nice writeup in Leah Garchik’s Chronicle column. UCSF at Mission Bay was the sponsor of the event and the Parkside, Chat’s Coffee, and Bottom of the Hill donated to the barbecue.  Linenthal  is also the curator of the Potrero Hill Archives project, assisted by Abigail Johnston. The two co-authored an excellent book on Potrero Hill.  For more on the archives project, go to potreroarchives.com.  You may find out more about Potrero Hill than you need to know.

I think Linenthal has done what every impresario dreams of doing:  making his event so special and so memorable that it will live on and on.  B3

The audience of History Night groupies.

Josephine and Phil,  a dynamic duo,

Josephine and Phil, getting ready for prime time.

The Apollo  jazz group in concert at History Night.

A student from the International Studies Academy selling tickets for the barbecue.  The money goes to the ISA student travel program.