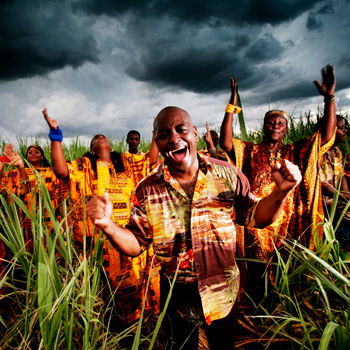 In Cuba, there is just one group that specializes in traditional Haitian songs — the Creole Choir of Cuba. “Some of the songs in our repertoire are those we learned from our parents or grandparents, others we learned during the many visits we have made to Haiti,” says choir director Emilia Diaz Chavez, through translator Kelso Riddell.

Riddell is the group’s tour manager for this journey, which is the choir’s fifth trip through the U.S. The vibrant ensemble — featuring Creole vocals and percussion — appears in San Francisco at the Herbst Theatre on Nov. 3, through the California Institute of Integral Studies’ public programs and performances series.

Diaz Chavez created the group in 1994 in Camagüey, Cuba. The core ten members — Rogelio Torriente, Fidel Miranda, Teresita Miranda, Marcelo Luis, Dalio Vital, Yordanka Fajardo, Irian Montejo, Marina Fernandes, Yara Diaz, and Diaz Chavez — were already part of the Regional Choir of Camaguey, which Diaz Chavez also directs (and has for the past 32 years). “The Haitian descendents of the Regional Choir got together to form the Desandann or the Creole Choir of Cuba with the objective of promoting the songs of our ancestors,” she explains.

Desandann literally translates to “descendents.” The choir is made up of the descendents of a people twice displaced, first from West Africa, then from Haiti. Some of their ancestors escaped slavery in Haiti near the end of the 18th century, others came to Cuba more recently to work in the coffee and sugar plantations.

Diaz Chavez was born in Camagüey, and remembers nights at home singing — she says her whole family enjoys song and dance. She studied music at the School of Arts in Camagüey, then completed her studies in Havana. “After graduating, I became particularly interested Haitian music and bringing it to the rest of the world,” she says.

While the journey of her people may have included displacement and sorrow, the songs the group sings are mostly uplifting — lyrics include messages of love, humor, and happiness, along with struggle. “These make us all laugh and cry and sing and dance,” say Diaz Chavez. And the consistent hand percussion and moving vocal compositions maintain an air of excitement, urgency. Live, the group dresses in colorful prints and engages audiences in participation. On this tour, which includes 30 performances during a six-week period, the choir also has been holding workshops at schools throughout the country.

“We hope people leave our concerts knowing more of our Haitian music, and that they have received our messages of love and friendship,” Diaz Chavez says, “And [we hope] they enjoy a little Cuban music too.” *

Riffat Sultana, daughter of legendary singer Ustad Salamat Ali Khan, performs traditional and modern music including Sufi, folk, and love songs from Pakistan and India. The vocalist is backed by an ensemble playing tabla, bansuri flute, and 12-string guitar. Sultana, who comes from eleven generations of master vocalists, is the first woman of her lineage to perform publicly and to tour the West. Since moving to the US, she has performed with Shabaz (previously known as the Ali Khan Band) — an acoustic group of world musicians — and more recently, her own Riffat Sultana & Party, a paired down group focused mainly on her velvety vocals.