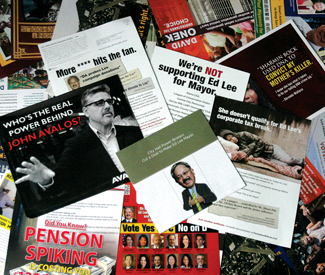 Mayor Ed Lee is again being dogged by allegations of unethical and possibly illegal conduct by supporters of his campaign, this time involving a surrogate group that was reportedly helping voters in Chinatown fill out their ballots using plastic stencils and sometimes even marking them and taking possession of them.

The incident was reported over the weekend by Bay Citizen and the San Francisco Chronicle, which quoted Elections Chief John Arntz as saying it was unclear from video shot by witnesses whether anything illegal had taken place, but that he has referred the matter to the District Attorney’s Office for investigation.

The DA’s Office is already investigating allegations that employees of GO Lorrie, a San Francisco International Airport shuttle service that recently received a favorable ruling by airport officials, were directed by managers to give the maximum $500 donation to Lee, for which they were reimbursed by the company. That would be illegal.

The latest incident involves Elections Code Section 18403, which makes it illegal for “Any person other than an elections official or a member of the precinct board who receives a voted ballot from a voter or who examines or solicits the voter to show his or her voted ballot.” This section also makes is a crime for independent expenditure groups to take possession of a completed ballot. Witnesses say both things happened when SF Neighbor Alliance, ran a streetside voter assistance operation in Chinatown.

That group is run by Enrique Pearce, whose Left Coast Communication has been working for and coordinating efforts with three other IEs supporting Lee. Pearce also wrote The Ed Lee Story, a book that features Lee’s personal anecdotes and photos.

Pearce worked with longtime Lee ally Rose Pak, a consultant with the Chinatown Chamber of Commerce, to create Progress for All and the “Run Ed Run” campaign that persuaded Lee to break his pledge and run for a full term.

Lee’s campaign has denied any connections to the groups working on his behalf. “I know the video shows them wearing Ed Lee for Mayor shirts, but that has nothing to do with my campaign at all. They are these independent expenditures. We have no knowledge of what they’re doing or who’s leading them. We have no connection or communications with them. We’re not supposed to, by law, so we have not,” Lee told reporters after a campaign event where Lee announced his endorsement by former Mayor Gavin Newsom.

But those claims have rung hollow for competing campaigns, which accuse Lee’s supporters of trying to rig the election and have called for investigations and federal election monitors to be brought in. Jeff Adachi, David Chiu, Dennis Herrera, Leland Yee, John Avalos, Michela Alioto-Pier, and Joanna Rees all signed a letter seeking state and federal oversight.

Yee held an Oct. 24 press conference on allegations, showing video and translations from Cantonese of volunteers telling voters, “If you haven’t turned in your ballots, we can help.” Yee showcased two Yee campaign volunteers who said they had knowledge of what he said was an effort “orchestrated and coordinated to steal an election.”

One was Andy Li, 21, who said he met “two to three” Chinese senior citizens who handed their ballots over to their housing manager because they needed help reading. Li quoted one saying, “I voted already. I turned it into my manager without knowing who I voted for.” The other, Linda Dudley, said she saw Lee supporters outside a grocery store filling out ballots for elderly Chinese voters, telling reporters, “What I see is not right.”

Lee said he would also support any investigations or monitors that officials deem appropriate. “If it was my campaign, I would fire them immediately because they should not be handling ballots for anyone else,” Lee told reporters, later adding, “I denounce those groups that think or say they’re for me. If they do the wrong stuff, they should be investigated and accountable for their actions.”

The most recent campaign filings by the SF Neighbor Alliance says it has so far spent $135,295 promoting Lee’s candidacy, although the group has not yet reported any contributions to the campaign. Among the expenditures was a mailer that said, “Keep Mayor Ed Lee. He has our backs.”

Yet as Lee denounces the group and tries to distance himself from it, Pearce and company may find the sentiment to be wishful thinking. (Steven T. Jones, Rebecca Bowe, and Christine Deakers)

I hadn’t checked my mail in awhile, and when I finally did last week, out popped my absentee ballot — and more than two dozen political mailers, a flood of campaign propaganda that sought to influence my vote.

For the most part, it was very positive, with some notable exceptions. The biggest cluster were the four fairly effective hit pieces on Mayor Ed Lee put out by the American Federation of State, County and Municipal Employees (AFSCME) through two Sacramento-based front groups: City Residents Support Leland Yee for Mayor and City Residents Opposing Ed Lee for Mayor.

Setting aside the deceptive names, the pieces do raise some points that could resonate with San Francisco voters and cut into Lee’s lead. “The SF Republican Party is supporting Ed Lee for Mayor. They like his corporate tax breaks,” reads one headline next to Lee’s smiling face and the GOP elephant logo, on the back side listing popular groups under the headline, “We’re NOT supporting Ed Lee for Mayor.”

It is true the local Republican County Central Committee voted to support Lee along with Tony Hall and Joanna Rees, and that the GOP supported the tax breaks for Twitter and other big companies that Lee pushed. Shilling for corporate interests was the topic of two other mailers, including a photo of a homeless woman under the headline, “She doesn’t qualify for Ed Lee’s corporate tax break.”

Another one hits the various ethical and legal violations by Lee supporters — a theme likely to be the subject of more mailers to come — by prominently featuring local newspaper headlines including “DA probes Lee campaign donations” and “Boss made us donate to Lee.”

AFSCME Political Director Willie Pelote defended the run of mudslinging by saying they plan to offer positive messages on Yee next but, “They are things we think the voters should know about Mayor Lee.” The Lee campaign has denied connections to improper electioneering and defended the corporate tax breaks as promoting jobs.

The other Lee hit piece in the batch came directly from Dennis Herrera’s campaign. It features an image of Lee as a marionette under the headline, “City Hall Power Brokers Cut a Deal to Make Ed Lee Mayor. But this deal came with strings attached…” It then ticked off several scandals that have sullied Lee — including being backed by Recology and PG&E after publicly praising those controversial companies — closing with “Dennis Herrera For Mayor — No Strings Attached.”

The only other mud in the batch, aside from a small swipe at District Attorney George Gascon’s ethics in an otherwise positive Sharmin Bock mailer, flew in both directions in the pension reform battle over Propositions C and D.

“The Same Tea Party Billionaires Fighting Unions in Wisconsin Are Behind Prop. D,” reads one of three hit pieces put out by the Yes on C, No on D campaign, which was funded by the police and firefighters unions and investment banker Warren Hellman.

The mailer highlighted Prop. D’s small group of wealthy backers such as George Hume and Michael Moritz, who in turn funded a Yes on D mailer that was a bit more positive than earlier pieces stressing the “backroom deal” that put Prop. C on the ballot, this time focusing on the issue: “Did You Know? Pension Spring is Costing You $132 Million!”

And then there’s the black and white mailer with the photo of John Avalos darkly asking, “Who’s the Real Power Behind John Avalos?” And then you realize it’s not a hit piece after opening it up and seeing it’s an Avalos mailer that answers the question, “Everyday People With a New Vision for Working San Francisco.”

Gee, maybe politics isn’t so nasty after all. (Jones)

Ed Lee didn’t show up for an Oct. 19 forum on AIDS and HIV issues that he had confirmed for, which is hardly a surprise: Lee has been ignoring, ducking, or blowing off events like this all fall. Yet in this case, there’s an interesting twist. If Lee had shown up, activists told us, he probably would have been asked about Eugene Lumpkin, the homophobic minister who served on the Human Rights Commission while Lee was executive director.

In 1993, Lumpkin, a Baptist minister appointed to the panel by then-Mayor Frank Jordan, told the Chronicle: “It’s sad that people have AIDS and what have you, but it says right here in the scripture that the homosexual lifestyle is an abomination against God.” At first, Jordan defended Lumpkin — and when Lawrence Wong, who also served on the commission, made a huge fuss and denounced both Lumpkin and the mayor, Jordan fired Wong. But when Lumpkin went on to say he believed in the Biblical edict that a man who has sex with another man should be put to death, Jordan finally fired him. Yet according to people who followed the furor at the time, Lee remained silent the entire time. “I personally covered the controversy and I have no recollection of Ed Lee ever saying anything about Lumpkin,” journalist Larry Bush told us. We asked Tony Winnicker, press spokesperson for the Lee campaign, if Lee has any recollection of speaking out against Lumpkin, and he responded: “I don’t know.” He added: “I can tell you that Ed Lee as Human Rights Commission Director held the first hearings on transgender employment discrimination, supported the equal benefits ordinance, made competitive bidding more transparent, and opened up contracting to women and minority local contractors.” All no doubt true — but Lee would have faced a tough crowd once the Lumpkin issue was raised. Which would have been plenty of reason not to show up. (Tim Redmond)