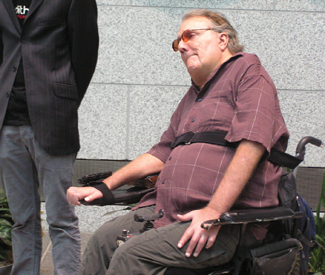 HERBWISE A throng of reporter types had gathered in the lobby of the State Building to listen to State Senator Mark Leno and State Assemblymember Tom Ammiano badmouth the feds.

“It is not the purview of the federal government to upset the will of the people,” said Ammiano, to the grunted affirmations of the patients, advocates, and cannabis business owners who had also assembled for the event.

Leno called the recent steps taken against the medicinal cannabis industry — which provides California each year with somewhere between $50 million and $100 million in taxes according to a 2010 estimate by the state’s Board of Equalization — “the exact wrong policy for a deep recession.” And then there’s the patients themselves. The two gay politicians commented that the issue of patient access is especially salient for the LGBT community, given that group’s increased incidence of HIV and AIDS.

Ammiano and Leno announced plans to push for federal regulatory guidelines that would clear up inconsistencies in the way medicinal cannabis works at the state level. As of press time for this article, Ammiano had scheduled another panel to discuss the matter on Tuesday, October 25 where he’ll be joined by marijuana advocates, labor leaders, Steve DeAngelo — founder of Harborside Health Center, which the IRS recently announced owes millions in back taxes because the business cannot legally write off standard expenses — and Matthew Cohen, who was handcuffed for hours along with his wife when the DEA raided his legal Mendocino County grow-op Northside Organics earlier this month. The event is being timed to coincide with President Obama’s visit to San Francisco this week.

When the politicos were done with their spiels, they trotted out Charlie Pappas, the owner of Divinity Tree Patients’ Wellness Cooperative. The landlord of Pappas’ 3,000-member dispensary was served with a cease and desist notice from the DEA that threatened property forfeiture and jail time if he continued to let Divinity Tree operate in his building.

Pappas approached the podium in a wheelchair, a patient himself. As he was introduced, it was noted that here we had one of the little guys, not a tycoon turning millions of dollars of profit as dispensary owners have been portrayed by unsympathetic media and government officials. It’s illegal to turn a profit off of medical marijuana — and who would want to get rich off of sick people anyway?

The controversy over the issue is understandable, but also mind-blowingly hypocritical. You know who turns a profit off of making and distributing medicine? The pharmaceutical industry, to the tune of billions of dollars, in fact. Makes the $1.7 billion national market that constitutes the medical marijuana industry look like shake.

The sound of money talking rendered unsurprising the words of a one Bruce Buckner, who has been a patient “since the laws passed” and who came down from his home in Sonoma County to attend Ammiano and Leno’s press conference. Buckner shared his suspicions about why the federal government turned its eyes to dispensary operations this autumn. Slightly grizzled and wearing a straw hat, Buckner had sat patiently though the event, hooked up to a respirator.

“It’s real obvious why Obama is doing it,” he said. “The pharmaceutical industry is afraid of how potent this medicine is.”