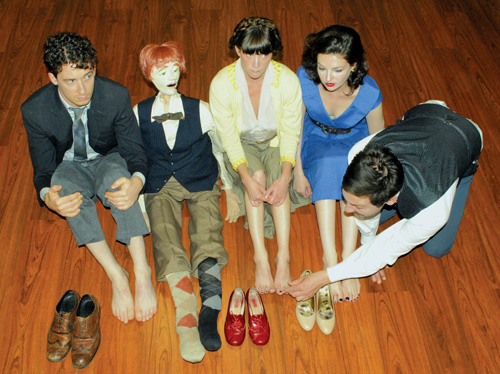 THEATER An elegant young woman in white gloves with a soothing voice (Meg Hurtado) breathes into a microphone some pre-flight instructions before beginning a narration of a journey “you” are taking. It’s accompanied by video footage (by Derek Phillips) of some European-looking city: a train station, a big electric clock, a rushing locomotive, the flow of strangers in a not-too-foreign land. No one cares you’re there, but you’re still uncomfortable, trying to stay calm and fit in. As she speaks, the small studio stage at the Exit Theatre flickers with a rush of bodies moving in near darkness.

Finally, from this mysterious disorientation, emerges a family of four: egomaniacal Major von Berg (a nicely volcanic Ryan Hayes), sly Mrs. Von Berg (a serenely confident Hurtado), morose teenage daughter Gussie (a withering but vulnerable Margery Fairchild in severe pigtails), and half-feral little Lippel (a wan puppet). They have a decidedly European mien about them, but from where or what century they hail exactly is hard to say. What is certain: you have arrived at your destination.

Dark Porch Theatre co–artistic director Martin Schwartz pens and directs this curious, half-elevated yet earthy, gently absurdist foray into the woods of East Prussia, a Twilight Zone of indeterminate time and place where a nervously deferential young man named Läuffer (Brandon Wiley) gains employment as a tutor for a deeply divided family headed by a hot-under-the-military-collar patriarch. Divided into a dozen discrete episodes over 90-minutes, Tutor: Enter the Exclave is fitfully inspired but at its best offers some excellent opportunities for the eight-year-old experimental theater company, now in residence at the Exit, which specializes in evoking the unsettling dream with humor, unusual staging, and a taste for the macabre.

Läuffer finds his two charges unimpressed and abusive. The puppet is particularly surly, slapping his tutor for fun and never saying anything more than “doo, doo, doo,” which has something fecal about it to be sure, but also harkens back to the German formal form of “you” (with maybe a little echo there of Sylvia Plath’s “Ach, du” in her papa-as-fascist poem, Daddy). Moreover, given the competing demands and threats thrust his way by the warring parents, his position in the household is hardly tenable. Still, he clings on for lack of anywhere else to go, until an unhealthy interest in 15-year-old Gussie culminates in general ruin and some grisly particulars.

Schwartz latches onto an intriguing aspect of this grim goodtime story — which he adapts from his own translation of Sturm und Drang–school writer J.M.R. Lenz’s 1774 play, Der Hofmeister — namely the theme flagged by the “exclave” in the title, which refers to an isolated region detached from the mainland but nevertheless a part of the same country. Attached yet apart proves an apt description of each character’s condition as well as of the family unit itself, which is seemingly lost in time. (The video mash-ups include modern-day footage of the Russian exclave of Kaliningrad, formerly East Prussia, the setting for the Lenz play.) Even the narrative is kept at arm’s length: Gussie, for instance, has a penchant for narrating out loud everything happening inside her head and around her as if it were a story. Moreover, at random intervals a light shift signals a break in the action, wherein the actors drop character and execute a short improvisational exercise. The quiet harmony on display in such Brechtian moments acts as a counterpoint to the hierarchical but inherently fractured world of the story.

The generational and authoritarian tension between the parents and the children, and the forbidden love it both produces and dooms, is a classic theme recalling Lenz’s contemporary Schiller’s Intrigue and Love or, a century later, Wedekind’s Spring Awakening. Gussie highlights it at the outset when she announces petulantly, “In all of our stories, discipline is the hero. In all of our stories discipline is broken and has its revenge.”

Damn if she isn’t right, too. Tutor‘s exploration of the exclave limns a mental landscape as much as anything else: an alienated chunk of real estate ruled by an authoritarian regime known variously as the Superego, or Daddy, or “doo.”