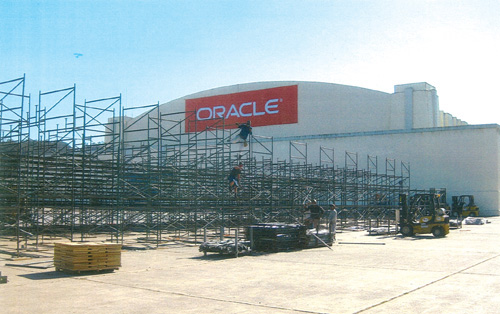 If wealth trickled down from Oracle’s OpenWorld conference in San Francisco last week, very little of it reached a small group of low-wage laborers hired from out of state to set up for a concert hosted as an event highlight on Treasure Island.

The Oct. 5 Oracle OpenWorld concert on Treasure Island featured Sting and Tom Petty as headliners. Registration packages for the weeklong tech conference, which drew some 45,000 attendees to San Francisco, ranged from $1,395 to $2,595.

A member of the carpenters union contacted the San Francisco Office of Labor Standards & Enforcement (OLSE) Sept. 16 to formally complain that a construction crew assembling a large seating structure for the event was being paid less than the city-mandated minimum wage of $9.92 per hour, city documents show.

Josh Pastreich, an OLSE official, went to the worksite to interview crew members. Their names were redacted from public records, but Pastreich described them as monolingual Spanish speakers who travel from city to city building seating arrangements for major events.

“Everyone is being paid $8 an hour (except for the supervisors),” he reported in a city document. “Workers generally started at 6:30 am but there was a little confusion about quitting times.” At least one work day lasted 11 and a half hours, according to a timesheet. The workers were hired by subcontractors brought in by Hartmann Studios, an events management outfit working directly for Oracle.

“We made a phone call, and sent them some emails,” OLSE director Donna Levitt explained. “Nobody said, ‘we intended to pay them the [legal] rate,'” but the subcontractors increased workers’ hourly wages to comply with San Francisco minimum wage ordinance requirements, Levitt said. Since the company adjusted the rate immediately, no fines were issued. There were fewer than 20 workers on the project.

OLSE did not correspond with Oracle directly, but spoke to the subcontractors. One was T & B Equipment, a Virginia-based company. “We were not aware of the minimum wage there, but we fixed it before the payroll was done,” a T & B representative identified only as Mr. Waller told the Guardian. Lewmar, a Florida-based subcontractor, assisted with staffing for the job. Oracle, Hartmann Studios, and Lewmar did not respond to Guardian requests for comment.

Since the enforcement agency intervened, the laborers earned $9.92 per hour instead of $8 — still well below the average Bay Area payscale for similar work. Building bleachers is comparable to raising scaffolding for major construction projects, and the prevailing wage for unionized scaffolding erectors in California is $37.65 per hour, or $62.63 when benefits are factored in.

None of the workers were from San Francisco, which likely spurred the carpenters union complaint — Carpenters Local 22 has faced significant losses in membership since the economic downturn due to high levels of unemployment disproportionately impacting the construction sector. Represenatives from Local 22 did not return calls seeking comment.

Boosters of the America’s Cup have hailed the upcoming sailing event as an engine for local job creation, but Oracle’s use of low-wage, out-of-state laborers at its pricey, high-profile OpenWorld event raises questions. While the tech company is a separate outfit from the America’s Cup organizing team, Ellison holds leadership positions at both.

Ellison was named the world’s sixth wealthiest individual in a Forbes profile in 2010, with a net worth of $28 billion. His total compensation last year was listed as $70,143,075. That’s 3,399 times the amount a person earning $9.92 an hour would make in a year working 40 hours every week — before taxes, of course. (Rebecca Bowe)

The Board of Supervisors approved legislation to close a gaping loophole in the city’s landmark Health Security Ordinance on Oct. 4, in the process forcing Mayor Ed Lee to promise his first veto and reveal his allegiance to business interests over labor and consumer groups.

Sup. David Campos sponsored legislation that would prevent SF businesses from pocketing money they are required to set aside for employee health care, seizures that totaled about $50 million last year. These health savings accounts are often used by restaurants who charge their customers a 3-5 percent surcharge, ostensibly for employee health care, instead simply keeping most of the money.

Despite aggressive lobbying against the measure by the San Francisco Chamber of Commerce — which went so far as to threaten to withdraw support for Prop. C, the pension reform measure it helped craft with Lee and labor unions — the Board of Supervisors approved the measure on a 6-5 vote on first reading (final approval was expected Oct. 11 after press time).

But then Lee announced that he would veto the measure, claiming it was about “protecting jobs,” a stand that was criticized in an Oct. 5 rally on the steps of City Hall featuring labor unions, consumer advocates, and mayoral candidates John Avalos, Leland Yee, Dennis Herrera, and Phil Ting.

Lee and Board President David Chiu — who voted against the Campos legislation, along with Sups. Sean Elsbernd, Mark Farrell, Carmen Chu, and Scott Wiener — have each offered alternative legislation that lets businesses keep the money but make some minor reforms, such as requiring businesses to notify employees that these funds exist.

Both Lee and Chiu talk about seeking “compromise” and “consensus” on the issue, but Campos and his allies say it’s simply wrong for businesses to take money that belongs to the employees, to gain a competitive advantage over rivals who actually offer health insurance or pay into the city’s Healthy San Francisco program, and to essentially commit fraud against restaurant customers.

“This money belongs to the workers and it’s something that consumers are paying for,” Campos said. “We have a fundamental disagreement.” (Steven T. Jones)

In a press release on Oct. 6, mayoral candidate David Chiu stated his concerns over Mayor Ed Lee’s potentially illegal campaign contributions from employees of the GO Lorrie airport shuttle service. That company benefited from a decision by airport officials in September and then offered to reimburse employees for making $500 contributions to Lee, according to a Bay Citizen report.

“These revelations raise deeply troubling questions that merit a full investigation by state authorities. City Hall cannot be for sale. Pay-to-play politics has no place in San Francisco, and will have no place in a Chiu administration — you can count on that,” he said in the release.

But has Chiu — one of the top fundraisers in the mayoral field — been engaging in a little pay-to-play of his own? That was the question we had after we saw that he had received lots of donations from restaurant owners, whose side he took last week in opposing Sup. David Campos’ legislation to keep them from raiding their employee health care funds.

The Golden Gate Restaurant Association (GGRA) waged unsuccessful legal battles against the Health Care Security Ordinance and lobbied against Campos’ recent reforms of its loophole. And in the latest donation cycle, the GGRA donated the maximum $500 to the Chiu campaign. Other Bay Area food services contributed up to $5,950.

So the question remains, despite Chiu’s posturing against “pay-to play politics”— are these food service companies contributing to Chiu’s campaign because he’s doing their bidding in opposing the Campos measure and sponsoring an alternative that lets them keep most of the money?

When Liane Quan, co-owner of SF’s Lee’s Deli, was asked if the health care legislation was a reason she donated, she said, “Yes, that’s one reason.” She then hesitated to elaborate why. Members of the Quan family associated with Lee’s Deli contributed a total of $1,000 to the campaign.

Maurizio Florese, an Italian-speaking co-owner of Mona Lisa’s Restaurant who contributed $100, didn’t want to talk about his contribution or employee health care. Neither did his wife and co-owner, Filomena Florese, who is also President of Mona Lisa Inc., which manufactures chocolate and pastry products.

In fact, despite leaving messages at seven local restaurants who donated to Chiu, none wanted to talk. But we did finally get ahold of Chiu campaign manager Nicole Derse, who said Chiu has a broad array of supporters and his donations from restaurants had nothing to do with his stance on the Campos legislation.

“There definitely is no correlation at all,” she told us. “Any suggestion to the contrary is ludicrous.” (Christine Deakers)