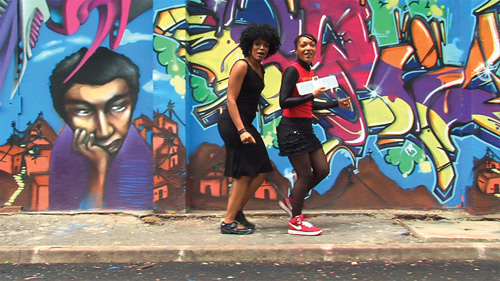 FILM The San Francisco Documentary Film Festival (Oct. 14-27), now in its 10th year, is probably my most-anticipated local film event. One of my favorite docs of all time, Cropsey, first crossed my path at the 2009 fest. This year, I didn’t even try to come up with a coherent theme or find one film to focus on — I just started grabbing titles and watching as many of them as possible. It’s been a gluttonous feast of true stories, friends. Short takes follow, with more online at Guardian blog Pixel Vision.

Ecstasy of Order: The Tetris Masters (Adam Cornelius, U.S., 2011) I can’t think of anything more boring than watching someone else play a video game. Especially Tetris. The goofy, good-natured Ecstasy of Order skirts that basic dilemma by focusing on its subjects, all contenders at the 2010 Classic Tetris World Championship. Most everyone involved was a full-on teenage geek back in gaming’s early days; now, with years of experience under their belts, they’re far more skilled and (for the most part) way less dorky. Trouble is, there’s no villain — unlike 2007’s mighty The King of Kong (an obvious inspiration here), a film elevated by its epic good-vs.-blowdried-evil central conflict. By contrast, Ecstasy‘s crew is comprised of friendly misfits who seem to genuinely enjoy playing against each other; without much drama, the stakes don’t seem as high. Oct. 23, 12:30 p.m., and Oct. 25-26, 9:30 p.m., Roxie.

The Furious Force of Rhymes (Joshua Atesh Litle, France/Germany/U.S., 2010) San Francisco native Joshua Atesh Litle’s vivid, cross-cultural study of contemporary hip-hop offers ample examples of how and why, as one German rapper says, music has become “an international language for those without voices.” After a brief recap of hip-hop’s Bronx, NY origins, the film jets to Paris and Berlin, the West Bank and Israel, and Dakar, Senegal, highlighting performers who rhyme about social injustice, political unrest, racism, immigrant struggles, and other issues affecting their daily lives. Kinda makes you sorry that mainstream American hip-hop has become so superficial and swag-obsessed. Fri/14 and Oct. 20, 9:30 p.m., Roxie; Mon/17, 9:30 p.m., Shattuck.

Holy Rollers (Brian Storkel, U.S., 2010) For a time, one of the most successful card-counting outfits in America was “the Churchteam,” a group of 20-somethings who mapped out a businesslike way of relieving casinos of millions of dollars. Two managers trained a pack of players, who would then travel to Las Vegas and other places, armed with stacks of bills (contributed by investors) and the cojones to cheat until they were “backed off” from the blackjack table. (As 2009’s The Hangover, excerpted here, points out, counting cards isn’t illegal — it’s merely “frowned upon.”) Neat story, but the real hook here is that the Churchteam was comprised almost entirely of practicing Christians; their shared faith insured that nobody would steal from the team’s profits. (Of course, when the team started losing, and theft was suspected, all eyes fastened upon the single non-Christian in the pack.) The fast-paced Holy Rollers tends toward the highly enjoyable, but the Churchteam members are so self-satisfied that they prove difficult to root for at times. Holy smugness, bro! Sun/16 and Oct. 20, 7:15 p.m., Roxie; Tues/18, 9:30 p.m., Shattuck.

Scenes of a Crime (Grover Babcock and Blue Hadaegh, U.S., 2011) Scenes of a Crime proves that “good cop/bad cop” interrogation techniques are used in the real world, not just crime films. It also affirms, distressingly, that the American justice system often travels through murky waters. When a baby dies under mysterious circumstances, his father is taken into custody; after an epic interrogation, he confesses to causing his child’s death, complete with a harrowing demonstration. At his trial, experts argue over the medical evidence, but the police-station videotape remains the case’s most pivotal factor. Was the father guilty, or did he deliver a false confession, egged on by the cops’ manipulative questions? The verdict says one thing; after watching Crime, you may believe another. Oct. 22, 12:30 p.m., and Oct. 24, 9:30 p.m., Roxie; Fri/14, 2:45 p.m., Shattuck.

With Great Power: The Stan Lee Story (Will Hess and Nikki Frakes, U.S., 2011) DocFest’s closing-night film defines “hagiography,” but if you don’t love Marvel Comics maestro Stan Lee, you might not have a pulse. Basically everyone ever associated with a Lee-based project (movie stars, directors, artists) pops up to fawn over the 88-year-old dynamo, but most delightful is the man himself, a hilarious, heartfelt character who has clearly spent his entire adult life working at a job he loves, influencing and entertaining millions along the way. With Great Power doesn’t quite come out and say it, but I will: he’s a real-life superhero. Oct. 23, 9:30 p.m., and Oct. 27, 7:15 p.m., Roxie; Oct. 20, 9:30 p.m., Shattuck.

The Woodmans (Scott Willis, U.S., 2010) Francesca Woodman jumped off a building in 1981 when she was 22, despondent over the fact that her photographs hadn’t found a niche in New York’s competitive art world. She was no stranger to competition — she’d grown up with a parents who placed art-making above all other obligations. Fast-forward to the 21st century, and Francesca remains the most-acclaimed Woodman; her haunting black-and-white photos, often featuring the artist’s nude figure, have proven hugely influential in the realms of both fine art and fashion. She was, as the San Francisco Museum of Modern Art website says (an exhibit of her work opens Nov. 5), “ahead of her time.” Scott Willis’ documentary features extensive interviews with her parents, George and Betty, and to a lesser extent Francesca’s brother, Charles (also an artist); the film is both Woodman bio and incisive exploration of the family’s complex dynamics. Most fascinating is Charles, who remarks of his daughter’s posthumous success, “It’s frustrating when tragedy overshadows work.” But after her death, he took up photography, making images that resemble those Francesca left behind. Sat/15, 7:15 p.m., and Oct. 22, 12:30 p.m., Roxie; Sun/16, 12:30 p.m., Shattuck.