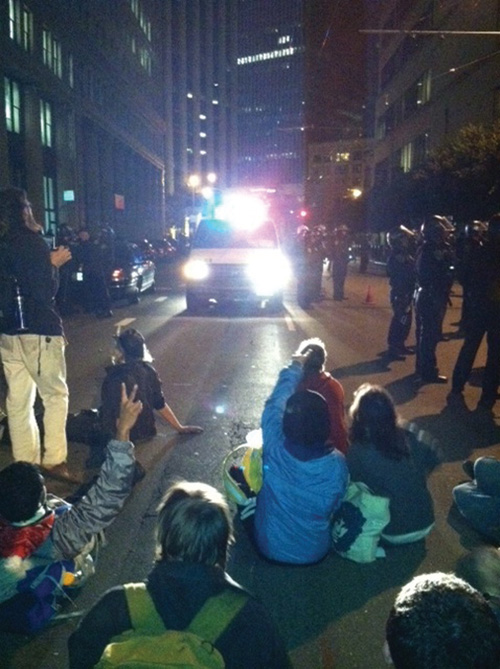 The decision to raid the OccupySF protest camp in the middle of the night Oct. 5 was approved by Mayor Ed Lee and Police Chief Greg Suhr — and involved a more aggressive approach to limiting protest activities than authorities in any other major city have undertaken.

Both Lee and Suhr insist that they support the protesters right to free speech. But the raid was more than a modest effort to get a propane stove turned off or to bring food preparation up to health codes.

The move only served to galvanize the movement and increase its numbers. And both police and protesters say they expect this occupation to continue for a long time.

Suhr told the Guardian that the decision to move into the encampment and seize its supplies was made after consultation with the Fire Department, Department of Public Health, and the Mayor’s Office. While DPH expressed concerns about food preparation on the site, Suhr said health officials never asked the police to shut the kitchen down. The Fire Department was another story.

“There was open flame, propane, and tons of fuel, near plywood. The Fire Department told us there as a fire danger,” Suhr told us. “Deputy Chief Cashman made the call that we would go move the people away from the fuel.”

Suhr said Mayor Ed Lee gave the okay to remove public safety hazards, but said the protest itself shouldn’t be interfered with. “In San Francisco, protesters are acting within their First Amendment right to free speech and freedom to assemble. While allowing for peaceful protests, we also must ensure that our streets and sidewalks remain safe and accessible for everyone,” Lee said in a public statement, although his office has not responded to a list of questions about the decision and its implications.

After all, the tents and other shelters were hardly a hazard to anyone; leaving the activists out in the rain with no tents was, strictly speaking, more of a health issue.

A movement that calls for the indefinite occupation of public spaces to protest corporate greed is bound to continue to cause conflicts with local ordinances and property interests, something that Suhr acknowledged. “We will surgically and as best as possible and with as much restraint as possible try to deal with the hazards while protecting people’s First Amendment rights, Suhr said.

He objected to the notion that there was a police crackdown on the protest. “They’re occupying it now, and they’re probably going to be there was a long time,” Suhr said. “We haven’t arrested one demonstrator. The only person arrested punched a cop and then threatened to kill him afterward.”

But Sup. John Avalos, the one major mayoral candidate to show up during the raid and try to mediate the conflict, said he’s disappointed with the city’s stance. “This is not the San Francisco that I know. This is not the San Francisco I love. This City has served as a sanctuary for free speech and assembly for generations, and we must protect that legacy,” Avalos said in prepared statement that he closed with, “This should be a city for the rest of us — for the 99 percent. I stand with Occupy SF.”

Even Suhr said that the SFPD has no intention of removing the protesters from their perch in front of the Federal Reserve, and will continue safeguarding regular OccupySF marches, telling us, “We will continue to facilitate this.”

“They got everything out of there so we could start over,” Suhr said the encampment’s kitchen and other hazards. “This demonstration isn’t going away. I think people are justifiably upset by this issue nationally.”