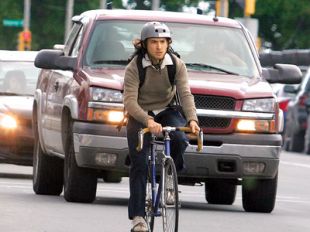 Anyone who has ever ridden a bicycle knows how scary and dangerous it is when cars pass too closely at high speed. So the California Bicycle Coalition made its top legislative priority for the year a bill, SB 910, to require drivers to give bicyclists a three-foot buffer or slow down to 15 mph. And even though the Legislature overwhelmingly approved this reasonable traffic safety measure, Gov. Jerry Brown vetoed it on Friday.

“His veto made no sense. We honestly can’t figure out why he vetoed the bill,” said CBC executive director Dave Snyder, a San Francisco resident who used to run the San Francisco Bicycle Coalition and who founded Transportation for a Livable City (now known as Livable City). “It’s not based on logic or public policy, but just based on politics.”

The California Highway Patrol and California Department of Transportation opposed the measure on the grounds that it could impede the flow of automobile traffic, and Brown cited their stand in his veto message. Indeed, keeping cars moving at high speed has long been the central goal of these agencies, even when it has high economic, environmental, or public safety costs.

But Snyder is right that Brown’s veto message is confusing and contradictory. He expresses support for the three-foot buffer, but expresses concern about slowing traffic to 15 mph, seemingly confused about the meaning of the word “or,” meaning drivers can provide the buffer or slow down to a safe passing speed if they’re unable to give bicyclists that much room.

People who don’t ride bikes tend to forget that automobiles are deadly weapons, and that a bicyclist’s brief swerve to avoid a pothole, broken glass, or other hazard can have disastrous consequences if a car is passing too closely. This veto follows another illogical one – Brown’s rejection of Sen. Mark Leno’s local vehicle license fee bill, which would have pumped $75 million into SF’s coffers and was almost universally supported by this year’s mayoral field – that gave undue deference to automobile owners.

Meanwhile, the San Francisco Police Department recently launched a crackdown on bicyclists in the city, issuing dozens of tickets on Market Street for running stop lights and on Townsend for briefly riding on the sidewalk en route to the Caltrain station – and ignoring the nearby cars parked in bike lanes and running those same red lights.

Now, before we get to the commenters’ tirade about scofflaws on bicycles – which come every time we write about bikes – let me note that people break the law on every form of transportation, everyday. Motorists speed, run stop signs and lights, and illegally edge past pedestrians (who themselves jaywalk with great regularity). And every Muni bus has several riders who haven’t paid. None of us are angels, so try not to get too worked up into a sanctimonious rage.

But if you want to truly understand why bicyclists can often be so flagrant in our disregard for the law, consider that we’re using a transportation system and abiding traffic laws that weren’t designed for us. Seriously, just ride a bike and you’ll quickly understand. We don’t need to stop at every stop sign or signal light to have a safe, smooth-flowing transportation system that doesn’t steal the right-of-way from drivers, who we can usually see and hear coming with plenty of time to stop. Idaho and other jurisdictions actually treat bikes differently than cars in this realm, with laws that don’t require cyclists to lose momentum by repeatedly coming to complete stops, and it works well.

The fact is, the bike buffer bill is the very minimum that we need to encourage cycling as a safe and appealing transportation option to more people, which would only help our environment, public health, and dependence on fossil fuels. And the fact that it was vetoed for petty, illogical reasons is incredibly frustrating.

Yet there may be a silver lining to this. Snyder said the CBC, which is just beginning to increase its reach and influence and to prepare a more ambitious agenda on behalf of California cyclists, will use this defeat as a launching pad for future efforts.

“The main benefit of the three-foot bill was the community organizing that we did to get is passed. So now we can leverage that for our next steps,” Snyder said. “California needs a lot more than a three-foot buffer to give people more safe transportation choices.”