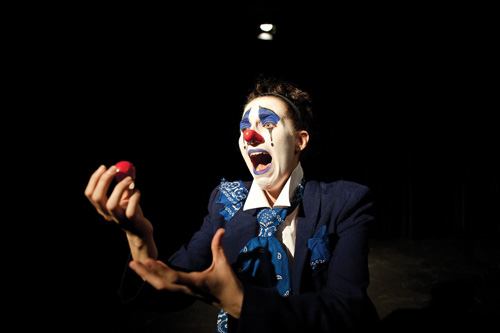 Opening night’s grab bag was another of those half-arbitrary groupings that ends up feeling so thematically right you can’t help getting a little creeped out. It started with Angela Neff’s sharp and poignant family tale, Another Picnic at the Asylum, the autobiographical story of her childhood (spent partly in the Bay Area) with seven siblings, a much put-upon young mother, and a wild, reckless, manic depressive cowboy crooner of a dad. Life with Father this ain’t, but the story’s gathering darkness is winningly offset by good-natured humor and an offbeat, almost zany embrace of eccentricity. Neff, a local writer-performer, works with only one prop — a simple wooden box — but you have no trouble imagining an entire landscape and cast of characters, including her intense, unpredictable father and his moth-to-flame charm. This is a well-honed show (developed with director David Ford), featuring vivid acting, nicely tailored prose, and a precise gestural vocabulary. A daughter’s complex fascination and frustration with a parent’s madness ultimately becomes not only the basis for a tribute, but a kind of afflatus too, as Neff reclaims a touch of her father’s larger-then-life scope as her own artistic inspiration.

Evan Kennedy’s Quatre-Vingt-Quatre, while the weakest of the three shows caught before print deadline, fits in pretty well with the fine line between terror and transcendence gracefully negotiated in the two shows above. Five actors in messy but iconic garb (a miner, a hunter, a strongman, a farmer, and a soldier) mince and mewl about the stage, counting off in French until they hit the magic number in the title with the aid of assorted instruments including an abacas. The play between order and chaos here extends subtly to various social norms and categories of existence, a clever calculus that offsets the otherwise wearying numbers game reminiscent of the pedagogical Dada of Sesame Street.