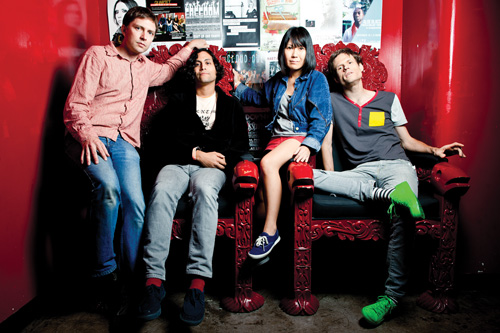 MUSIC Something unexpectedly noisy is happening in the museums of San Francisco. There are two shows taking place in the next couple of weeks that will defy expectations of appropriate gallery sound levels.

The idea for one event was born when artist-quilter Ben Venom wrote a proposal to bring heavy metal music to the Yerba Buena Center for the Arts. Venom’s massive heavy metal quilt, See You on the Other Side, is currently on display in between two motorcycle gang-inspired jackets as part of the ongoing BAN6 exhibition.

The Bay Area metal scene is woven into the fabric of See You on the Other Side. Shirts donated to Venom from local bands such as Hightower, Black Cobra, and Walken — along with old tees for his own collection — were cut up and sewn into his most ambitious design yet: a skull with seven Medusa-style snakes with slithering tongues, multiple pyramids, and lightning bolts.

Venom sewed four other (smaller) heavy metal quilts in the past, so his own collection of vintage shirts has nearly run dry. Along with his friends’ bands, acts such as Gwar, Kylesa, and Red Fang have approached Venom, offering support for his vision or their own collections of shirts to include in future quilts. So far, the only criticisms Venom has faced are from those pissed off that he’s cutting up classic shirts — some of which, like his vintage Testament shirt, can sell for upwards of $80 on Ebay. But he doesn’t see it as destroying something, he’s sees it as giving shirts a new life, a new function. “At the very end of the day, even the beasts of metal need a warm blanket,” he says smiling.

Likely very warm at 13×15-feet, See You on the Other Side includes more than 125 repurposed shirts with vivid and macabre imagery; the red of the snakes’ tongues popping against the white bulls-eye quilting pattern.

The Mission resident takes inspiration from his life growing up in deeply religious, creative family in Southern Georgia, conversely citing heavy metal, the occult, and alchemy imagery as similarly over-the-top exalting. “The way I look at my work is a collision of the outrageous stage antics of Ozzy Osborne collided together with the domestic nature of crafts,” says Venom, arms folded, peering at his work on the high-ceilinged wall.

Another artistic collision of sorts will take place in a few weeks to compliment Venom’s pieces: three local heavy metal bands will play in the sculpture garden at YBCA on Sept. 22, just outside the gallery where Venom’s work hangs.

Venom came up with the event idea when the curator sent out a query to the artists involved in the BAN6 exhibition, to see if anyone wanted to tack on a lecture or performance. “It totally ties into what I’m doing. It’s like, heavy metal at the museum — that’s a little weird,” Venom chuckles. “I contacted Hightower, Black Cobra, and Walken and they were all super amped on it.”

Those three bands are also represented with imagery in the quilt, having donated shirts to Venom, something that the artist notes as meaningful to the spirit of the piece. “I’m hosting the event, but the bands are playing — it’s their night.”

There will be a uniquely different live rock show in a nearby museum this month. The formerly San Franciscan foursome, Deerhoof, is flying in from across the country (New York City, Portland, Oreg., Albuquerque, N.M) to play in the main lobby of the San Francisco Museum of Modern Art this Thursday, Sept. 15, as part of the SFMOMA: Now Playing series.

Deerhoof — Greg Saunier, John Dieterich, Ed Rodriguez and Satomi Matsuzaki — was documented by filmmaker Adam Pendelton for his video installation, BAND, a reinterpretation of Jean-Luc Godard’s 1968 film Sympathy for the Devil. Godard’s original included scenes of the Rolling Stones working on the track from Beggar’s Banquet, interlaced with clips of the Black Panthers. Pendelton’s three channel video installation, shot in 2009 while Deerhoof was working on its most recent record Deerhoof vs. Evil, includes beautiful close-ups of the avant-garde musicians working on a song, mixed with audio footage of a day in the life of a politically conscious teenager.

The eight-hour shoot caught the band’s first tinkering with “I Did Crimes For You,” a deceptively upbeat, repetitious pop track that kicks off with clean guitar, hand-clapping, and Matsuzaki’s recognizably high girlish vocals explaining: this is a stick-up/this is a stick-up/smash the windows.

“I don’t know what other bands are like when they’re working on music, but it can be pretty high tension,” says Dieterich, from his new home in Albuquerque, “It’s not like we’re in a war zone or something, but at the time it can pretty nerve-wracking.”

Despite the nerves and early unfounded fears about being filmed, Dieterich says the band ended up enjoying the experience. “It’s good to do things like that, to force yourself to be transparent…to be able to operate under any circumstance.” Deerhoof does have a track record of flexibility, whether it be taking risks with new tones or equipment, switching instruments during live shows, or reaching out beyond the traditional album-concert rock band format. The band created and performed an original score to Harry Smith’s silent film Heaven and Earth Magic during the San Francisco International Film Festival a few years back, and its album Milk Man was turned into a piece of modern dance theater by schoolchildren who performed it in Maine.

The SFMOMA event will include Deerhoof’s performance along with a screening of BAND. There also will be a projection of a different Pendelton project; footage of David Hilliard (former chief of staff of the Black Panther Party) touring landmark Black Panther Party sites in Oakland, and an onstage interview with Hilliard.

Deerhoof hasn’t performed in conjunction with Pendelton’s film since the premiere in New York City last year; Dieterich says he’s looking forward to taking it to the museum. “We’re going to be playing in this big entryway, I don’t know acoustically what that room is like — just thinking from a sound perspective, it will have its own strong character.”