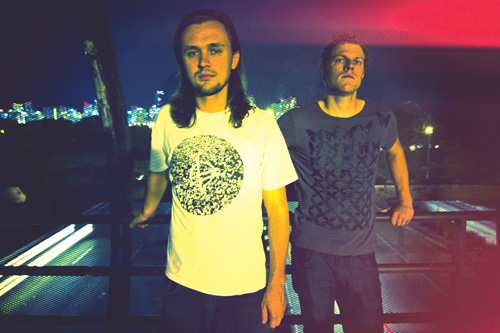 MUSIC Michael John “MJ” Hancock is in a silly mood. Out on the road with his band ANR (which stands for Awesome New Republic), the drummer-singer picks up my call and says, “Awesome New Republic answering service.” I give pause, waiting a tick for the beep, assuming this was an answering machine. But he was there, in the van in Grand Rapids, Mich., on the phone after a “long, deep night drive.” Flustered from the confusion, I chattily ask about the current tour.

“It’s going very well,” he says. “We’re all getting along swimmingly aside from the 50 percent of the time when we’re yelling at each other. Most of the yelling is just passionate arguments about important sociopolitical issues though — the way a good American tour should go.”

His curious mood might be due to the odd freak accident that happened to ANR a few days before they left for tour. While filming a music video in the band’s Miami home base for the song “It’s All Around You” off the deluxe version of its album Stay Kids, keyboardist-effects pedal charmer Brian Robertson was trying his hand at some modern dance choreography and ended up breaking his foot on the hard cement floor. “[The song] is about hurricanes and earthquakes pummeling the East Coast — which coincidentally has been happening — and he was spinning a girl around in a conceptual imitation of a hurricane,” explains Hancock.

Now here’s where you need to bring in the suspension of disbelief. This story could be bogus, the modern dance, the hurricane imitation, it all just sounds too darkly comedic to be true. And yet, I choose to believe. And that goes for the music ANR makes as well. The songs off Stay Kids — and the deluxe version released this week — are about the magnificent and horrifying scope of natural disasters, and yet, thanks to the synthy-pyschadelic pop tones, they exude futuristic glee. It’s less ha-ha funny, more thought-provoking amusing. A black comedy.

The duo enlisted a friend to come on tour and help with the things Robertson cannot do with his injury — set up equipment, lift heavy machinery, drive the van. “Brian just sits on a nice golden stool and tells us what to do,” Hancock says. But he can still press the effects pedals with his booted foot.

Hancock may be in a mirthful mood, but he takes his work seriously. The band’s next couple of releases sound as divergent as their sound stretches; one is a live instrumentation rock record influenced by violence around the world, the other an electronic R&B and pop record they’ve been recording in motel rooms along the tour. Along with playing three keyboards and a Moog, Robertson also mixes and masters all their albums.

Hancock and his partner in psychedelic pop crime, Robertson, met and began creating beat-heavy music with soulful melodies after both relocated to South Florida a decade ago to attend the Frost School of Music at the University of Miami. In between then and now the duo has released a smattering of well-received records and EPs, toured heavily, and opened for Animal Collective, Neon Indian, and No Age. They got a mention in a New York Times article a few years back about the rise of the Miami indie scene, and have recently been mentioned in the same breath with fellow Miami up-and-comers Jacuzzi Boys.

This tour takes ANR to San Francisco proper for the first time (there was an Oakland show three or so years ago) this Thursday, Sept.15. “Hopefully we’ll make it,” Hancock jokes. “You’ve got a lot of hills and our van doesn’t go up hills very well — I guess we’re playing Bottom of the Hill, so we’ll be okay.” Pause, “If you see three guys pushing a big white creepy stalker van up a hill, you know, that’s us.”

Despite the constant touring and songwriting, the duo says it hasn’t changed all that much in the past eight years. “It’s only really evolved as far as our ability to record better, and lyrically, it’s evolved,” says Hancock. “It used to be a lot more intentionally funny — I guess some people still think we’re pretty funny. But we’re not joking, we’re serious now,” he says with a laugh. Got it, ANR is no laughing matter. *

With We Barbarians, Strange Vine